Transmission Control Protocol (TCP) is helpful to send a file or message over a connected network. Each file gets divided into packets at the sender network. The packets get merged on arrival at the receiving network. The maximum size of a TCP packet is 64K (65535 bytes). Generally, the packet size gets restricted by the Maximum Transmission Unit (MTU) of network resources. MTU is the maximum size of the data transfer limit set by hardware in a network. The packet size should never exceed MTU.  In this tutorial, we’ll try to explain the concept behind each of these terms and explore various aspects of it.

TCP connection uses TCP, one of the core protocols in the internet protocol suite, and offers a dependable protocol for digital communication. TCP receives messages from a network resource such as a server, router, switches, splits them into packets, and finally forwards them to the target network resource. Almost all connections involving the internet uses a TCP connection. We’ll explain more about how the packet works in subsequent sections. Let’s take the example of email communication to understand TCP communication:

We can see from the above figure an email undergoes processing through the seven layers of the OSI model. Each layer of the source server communicates to the corresponding layer of the target server. In the Application Layer, the email client uses SMTP protocol to communicate with the email server when we send an email. The Presentation Layer converts our mail into ASCII and images. The Session Layer establishes and maintains the connection with the target server. The Transport Layer splits the message into multiple packets and adds port information of both source and destination servers. The Network Layer defines the routing path of packets by adding corresponding IP addresses. It is interesting that even if each packet is travelling for the same target, the route they use to travel may be different. Data Link Layer prepares the packet to transfer over the Ethernet, and the Physical Layer eventually transmits the frame over the physical connection like LAN cable, WiFi, or broadband. The following figure explains the above process:

When the packets arrive at the Physical Layer of the target network (Host2 in the above figure), each layer at the target email server processes the packets to retrieve the data and show our email in the target Inbox.

Digital data exchange within a computer network uses frames and packets. The main difference between frame and packet is that frame is the serial collection of bits, and a packet is the fragmented data encapsulated in a frame. A packet is a single data unit within the Network Layer in the OSI model.   Each packet generally includes a header and a payload. The header has the port & IP address of the source and destination network device. The data or message content is the payload.  For example, when we transfer an image file, the file is divided into several packets. The packets contain parts of the image that travel separately. The packets get rejoined by the receiving network device to reconstruct the image file. In the end, they get combined to retrieve the same image file:

The packet contains information for directing them to the target address and information for checking transmission error and data integrity. Splitting data efficiently helps the network manage different network parameters, such as bandwidth, route, and device connections.

4. Why Packet Size Is Important?

The advantages of packet-based TCP communication are the following:

The disadvantages of a packet-based TCP connection are the following:

5. Fragmentation of Packets for Different MTUs

Let’s assume a source device using TCP communication that sends an IP packet over the network. The packet size must be smaller than the MTU of the target and intermediary network. This restriction is by the network data link layer and hardware MTUs. So what happens if the packet is larger than the MTU of the intermediary network or target device? The answer is to halve the packet further into pieces, and this process is known as fragmentation. The individual pieces are fragments that are then rejoined at the target network to retrieve the complete packet. However, depending on the type of IP protocol, such as IPv4 and IPv6 following conditions may occur:

Let’s now see how fragmentation works. The following figure shows a  source data link or MTU of 1500 Bytes and the target MTU of 1200 Bytes. Considering fragmentation is allowed, the packet size of 1400 Bytes gets divided into 1200 Bytes and 200 Bytes: 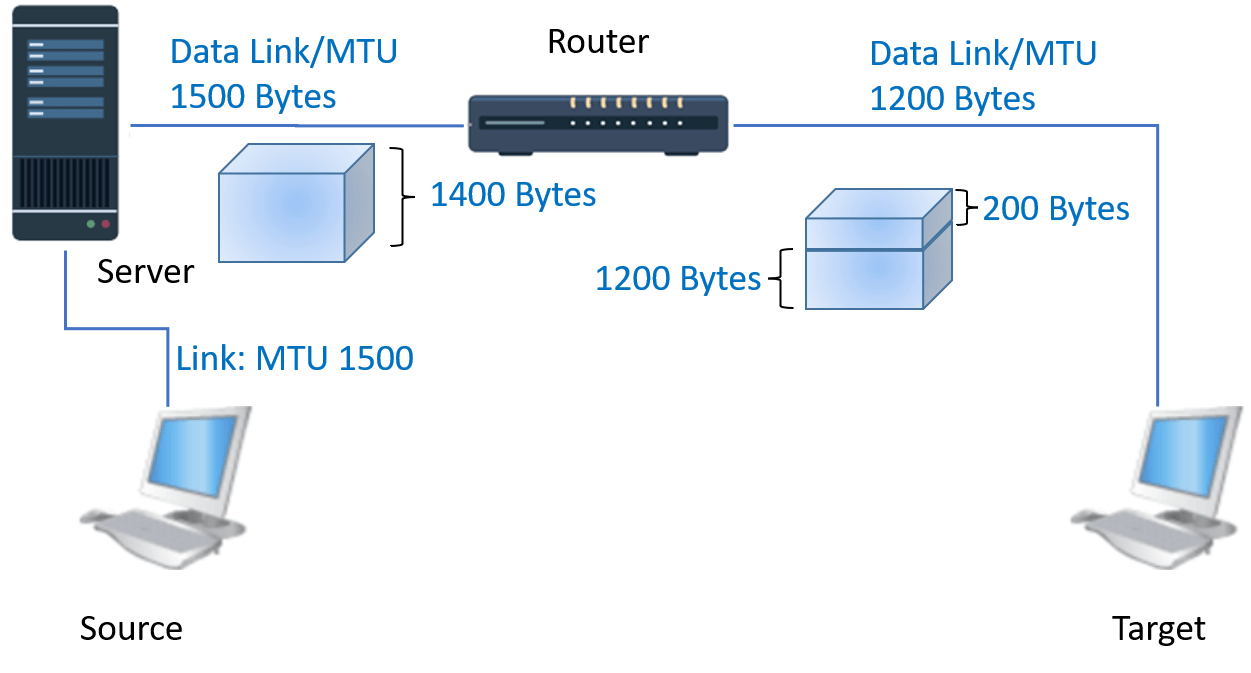 We must be wondering what happens to the original packet during fragmentation? They get discarded, and the data within them gets fragmented.

MTU is a unit of estimation indicating the maximum size of a data bundle that a network resource can acknowledge effectively. It’s the most important parameter that the other networks should know for establishing a TCP connection. A larger MTU supports more data to fit within lesser packets, resulting in faster and improved transmission performance. However, if an error occurs in communication, the packet takes longer to re-transmit. A smaller MTU can improve network latency.