The transport and network layers are the two most important parts of the OSI model.

In this tutorial, we’ll explore the fundamentals and the services offered by these two layers.

Finally, we’ll highlight the core differences between them.

Transport Layer is the fourth layer of the OSI Model: 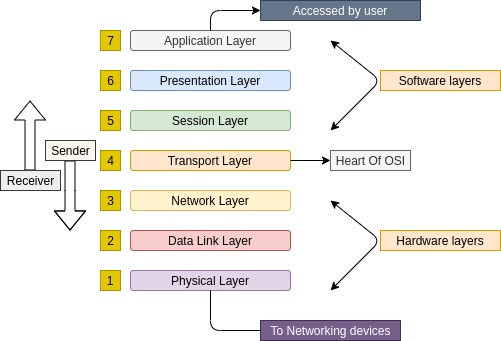 It’s an end-to-end or process-to-process communication layer that is responsible for delivering the entire message.

For the process to process communication, the transport layer uses a port number assigned to each process uniquely.

In this example, Home-A and Home-B are two different networks. Jack and Jones are the IP addresses of the two hosts. The type of postcard represents different types of processes:

It’s important to note that the use of ports is crucial in the transport layer. Certainly, there can be multiple types of processes that may run on a single host at a particular time. In general, a single IP address is assigned to a host. A sender host sends the data to the receiver host with a port number.  Furthermore, the receiver host can identify the port and will route the data to a specific process.

The transportation layer provides a lot of services:

Also, it provides reliability by offering services like in-order delivery of packets to process, no loss of data, and control of data duplication.

This layer provides the error control using checksum bits. The sender host generates a checksum using some algorithm. Furthermore, the receiver host decodes that checksum so that it can detect the corrupted packets. At the time of transmission, if there are any noises, it can alter the data. Hence, the transport layer uses the automatic repeat request method to re-transmit the missing or error packets: 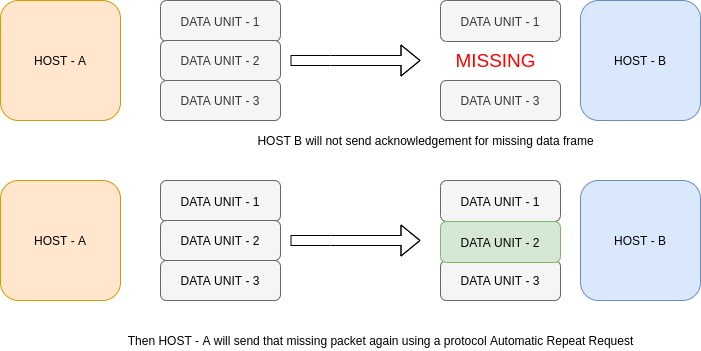 It also facilitates the efficient use of the network by using multiplexing. There might be a case that multiple processes from the sender host need to send packets, but there is only one transport layer at a time. In this layer, a protocol accepts data from the different processes, differentiated by their assigned port, and adds them in the header.

On the receiver’s host, to process the incoming data, we need to perform demultiplexing. Here, the transport layer differentiates all the data and sends them to their respective processes according to their port addresses:

Network Layer is the third layer of the OSI Model. It’s responsible for source-to-destination or host-to-host delivery of packets across multiple networks.

This layer takes the data from the transport layer, adds its header, and forwards it to the data link layer. This layer ensures that each packet reaches from its point of origin to its final destination. Switches and routers are used in this layer. The network layer is implemented on networking devices.

Congestion and error control are also taken care of by the network layer. It adds a checksum to the packet for error control.

It uses the destination host and the source host’s logical address (IP address) to send the data. An IP address is a combination of the network address and host machine address.

Like the transport layer, the network layer also provides some important services:

The network layer uses logical addresses to communicate from host to host in different networks. Furthermore, it adds the IP address of the sender and the receiver in each packet so that each sent packet can reach its designated destination.

Network Layer also provides the services for routing and switching. When there are more than one independent networks which are connected to create a larger network, the connecting devices (routers and switches) route and switch the packets from source to destination.

There can be more than one route to send packets from source to destination. Hence, the network layer is responsible for choosing the best route or path to send packets using routing protocols.

The network layer created a routing table to maintain the details of the shortest possible path from host to destination. We also use this table in the switching process. Switching is a process that uses the routing table and guides the packets to different networking devices:

In this example, we want to send a packet from Host-A to Host-B. There are two paths: P1 and P2. The network layer will choose the optimal path P1.

Another important service provided by the network layer is fragmentation. It breaks the packets into fragments to decrease the overload on the routes. There is a possibility that the size of data is larger than the capacity of the router to handle.

This layer divides the data into small fragments and sends them further. Moreover, it is also responsible for accumulating the fragmented data on the receiver host. The accumulation process of fragmented data, however, takes place on the destination node only:

6. Flow of Transport and Network Layer

Now let’s explore how the transport and network layer works through a practical example: 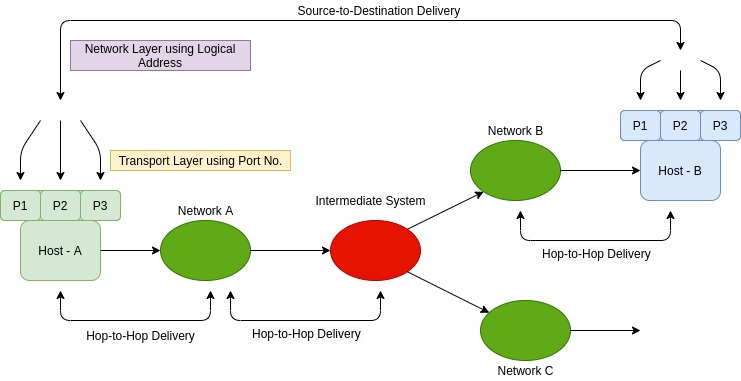 In the diagram, there are two host devices Host-A, Host-B, running in Network-A and Network-B. Moreover, three processes are running on each end device. Each process of Host-A wants to send the data to some processes of Host-B.

As in this example, there are two paths going out from Network-A. The network layer will decide which path to choose for sending packets.

When the packets reach their destination host, the transport layer will route the packets to their respective processes using their port number.

7. Difference Between Transport and Network Layer

Let’s look at the fundamental differences of the transport and network layer:

In this tutorial, we’ve discussed two important layers in the OSI model: the transport and network layer. We also explained the services offered by the two layers and the core differences between them.