Finally, we’ll talk about the core differences between them.

Flow control deals with the amount of data sent to the receiver side without receiving any acknowledgment. It makes sure that the receiver will not be overwhelmed with data. It’s a kind of speed synchronization process between the sender and the receiver. The data link layer in the OSI model is responsible for facilitating flow control.

Let’s take a practical example to understand flow control. Jack is attending a training session. Let’s assume he’s slow in grasping concepts taught by the teacher. On the other hand, the teacher is teaching very fast without taking any acknowledgment from the students.

After some time, every word that comes out from his teacher is overflowing over Jack’s head. Hence, he doesn’t understand anything. Here, the teacher should be having information about how many concepts a student can handle at a time.

After some time, Jack requested the teacher to slow down the pace as he was overwhelmed with the data. The teacher decided to teach some of the concepts first and then wait for acknowledgment from the students before proceeding to the following concepts.

Similar to the example, the flow control mechanism tells the sender the maximum speed at which the data can be sent to the receiver device. The sender adjusts the speed as per the receiver’s capacity to reduce the frame loss from the receiver side.

One of the popular flow control mechanisms in TCP is the sliding window protocol. It’s a byte-oriented process of variable size.

Now from the available receiver window, TCP calculates how much data can be sent further without acknowledgment. Although, if the receiver window size is zero, TCP halts the data transmission until it becomes a non-zero value.

The receiver decides the size of the window. The receiver sends the currently available receiver window size with every acknowledgment message.

The opening window process allows more data to be in the buffer that can be sent:

The closing window process indicates some sent data bytes have been acknowledged, and the sender needs not to worry about them anymore:

Suppose there are two devices: Device-A and Device-B. Device-A wants to send 300000 bytes of data to Device-B. Firstly, TCP breaks the data into small frames of size 1500 bytes each. Hence, there are 200 packets in total. In the beginning, let’s assume Device-B notifies the available receiver window to Device-A, which is 60000 bytes. It means Device-A can send 60000 bytes to Device-B without receiving the acknowledgment from Device-B. 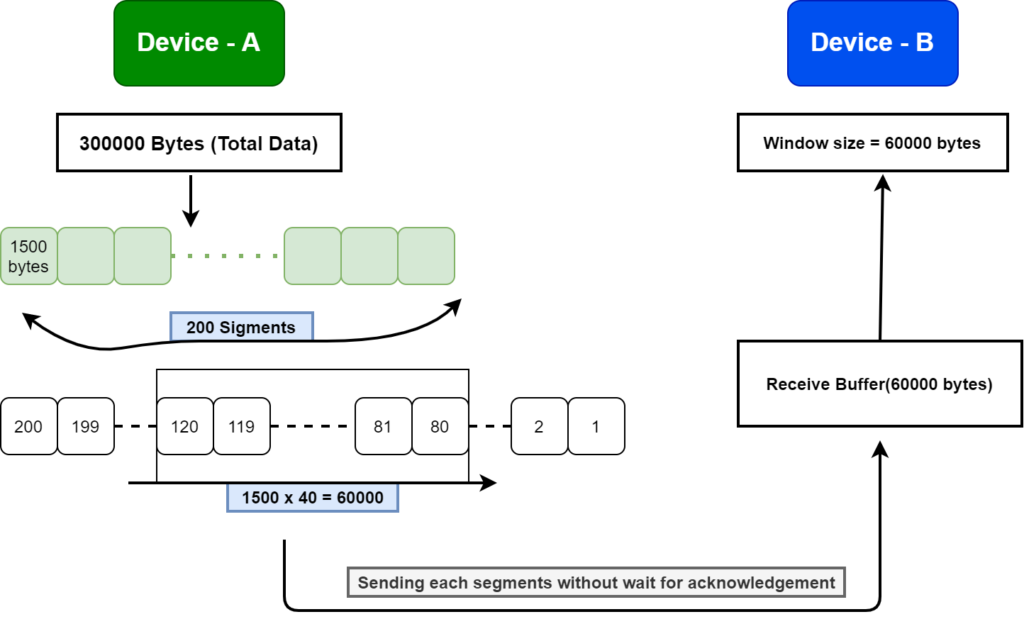 We know TCP stops the transmission when the receiver sends the zero-size window. However, there is a possibility that the receiver has sent an acknowledgment but was missed by the sender.

In that situation, the receiver waits for the next packet. But on the other hand, the sender is waiting for non-zero window size. Hence, this situation would result in a deadlock. To handle this case, TCP starts a persist timer when it receives a zero-window size. It also sends packets periodically to the receiver.

Congestion control is a mechanism that limits the flow of packets at each node of the network. Thus, it prevents any node from being overloaded with excessive packets. Congestion occurs when the rate of flow of packets towards any node is more than its handling capacity.

In the first phase of congestion control, the sender sends the packet and gradually increases the number of packets until it reaches a threshold. We know from the flow control discussion, the window size is decided by the receiver.

After each acknowledgment, TCP ensures the linear increment in window size (CWND), slower than the slow start phase.

There’re two conditions when TCP detects congestion. Firstly, when there is no acknowledgment received for a packet sent by the sender within an estimated time. The second condition occurs when the receiver gets three duplicate acknowledgments.

In the case of timeout, we start a new slow start phase. To handle the second situation, we begin a new congestion avoidance phase.

To summarize the flow and congestion control in TCP, let’s take a practical example.

Jack wakes up in the morning and gets ready for the office. On the way, he has to cross multiple road junctions, and there are traffic signals on each junction. In the office, there is a lift which drops him on his office floor.

In this example, all the traffic signals try to control the congestion from one junction to another. It works the same as maintaining the flow of segments from one node to another node in a network. Finally, when Jack reaches the office building, the flow control starts. The security guard controls access of the people for the lift as per the capacity of the lift. It’s like the receiver buffer concept inflow control: 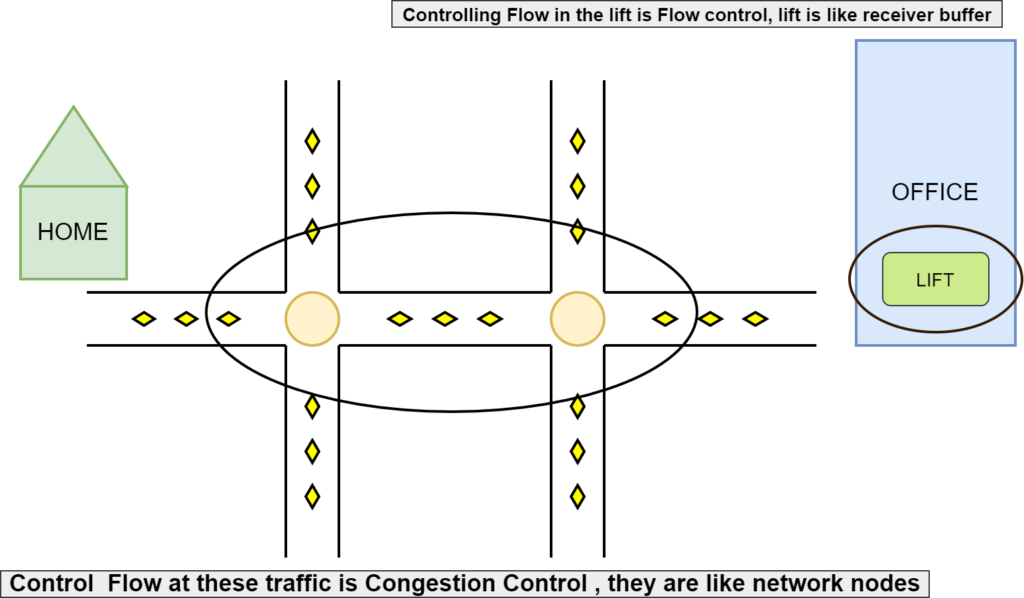 Let’s talk about the core differences between flow and congestion control in TCP:

In this tutorial, we discussed flow and congestion control mechanisms in TCP. We presented the concepts and protocols involved in these mechanisms with examples.

Finally, we explored the core difference between them.