In the first section, we’ll review the category of password attacks, approaching their objectives and typical methods. So, in the following sections, we’ll deeply explore both the credential stuffing and password spraying attacks, finally comparing them in a systematic summary.

There are multiple ways for users to prove their identity to access a system. Usually, authentication methods consider elements we are, have or know (sometimes all of them). These elements, in turn, are processed by algorithms that compare the provided data with the stored one, granting access or not for the requesting user.

When we talk about authentication methods based on elements we expect the user knows, the most popular resource employed is passwords.

We can understand passwords as personal and secret data kept by a user and used to prove his identity, thus accessing restricted systems and data.

Nowadays, passwords protect many sensitive and value-aggregated data around the world. Due to this fact, hackers and other malicious users created several strategies to steal or infer passwords.

Each password attack has specific characteristics and execution techniques. However, all have the same final objective: find a valid user credential and use it to access a given system or data.

Currently, we have multiple accounts to access services online. These accounts, in turn, commonly require a password defined by the user. Thus, due to the existence of many accounts, the users tend to choose easy-to-remember passwords and, sometimes, the same password several times.

This scenario, however, is what enables credential stuffing attacks to happen.

In summary, credential stuffing attacks consist of using leaked credentials of a given system to try to access other systems.

Particular systems employ more rigorous security schemes to keep user credentials than others. For example, some systems store salted hashes instead of plain text passwords. Since a hash is not reversible, these systems’ databases are more robust against data leakage.

On the other hand, some systems store the users’ plain text passwords in their databases. It makes the stored credentials very vulnerable in case of data leakage.

In this way, the most relevant precondition of a credential stuffing attack is the attacker accessing these insecure credentials databases.

At this point, we should highlight that even databases with hashed passwords may be insecure. Choosing bad hashing functions makes them password hashes vulnerable to brute force and rainbow table attacks.

Once the attacker gets users’ credentials, he can test the combinations of usernames and passwords in multiple and different systems. Many attempts, of course, will fail. However, the probability of a few attempts working is high, given an enormous number of credentials stolen and multiple systems tested.

The following image depicts, on a high level, the processes of a credential stuffing attack: 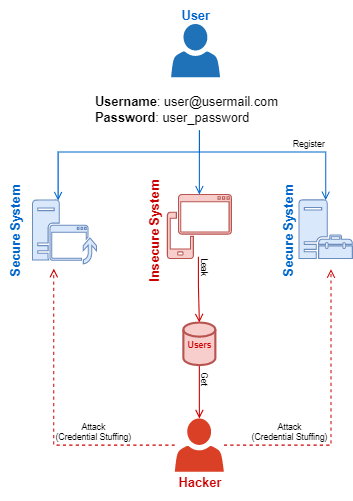 Avoiding credential stuffing attacks include efforts of both service providers and users. Next, we describe some of the main precautions and countermeasures regarding these attacks:

Managing a large number of user accounts is hard. As discussed in the previous section, we usually have many accounts with passwords to access different services. So, to make the process easier, we sometimes opt for using easy passwords.

But, easy passwords are insecure. After being used several times, these passwords became popular and well-known. This is the exact scenario that enables password spraying attacks.

In summary, password spraying attacks are dictionary attacks that employ frequently used passwords to try to get access to systems through a list of potential usernames.

Lists of common passwords are easy to find. Many entities compiled these lists from leaked bases of passwords, thus making them available online.

The following image shows a simplified workflow of a password spraying attack: 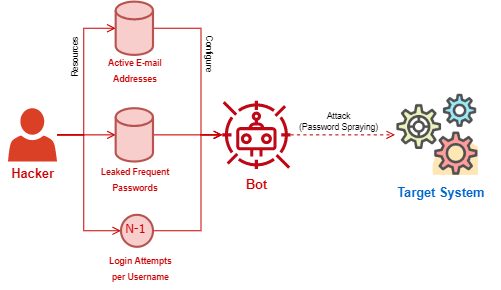 The most effective way to reduce the success of password spraying attacks is on the users’ hands by avoiding using common and frequent passwords to protect their accounts. However, there are some precautions and countermeasures regarding the owners of the systems too:

Authenticating users became a crucial task due to the increasing number of online services. A usual authentication method consists of correlating usernames to passwords, granting access to a system when a user provides a valid combination.

Although a popular option, password-based authentication is susceptible to multiple attacks. These attacks, in turn, aim to steal or infer valid credentials (username plus password) to access systems as authentic users.

Two particular attacks in this context are credential stuffing and password spraying.

In short, credential stuffing aims to use leaked credentials from a system to access other systems. A password spraying attack, however, uses lists of potential usernames and common passwords, thus trying to infer valid credentials and get access to a system.

The following table summarizes some relevant characteristics of these attacks.

Finally, we highlight that these attacks are password-focused. In such a way, using multi-factor authentication is an efficient option to avoid them.

We can conclude that password-based authentication is essential for several systems nowadays. However, this authentication method should be well-planned to avoid being exploited by attackers.