It is relevant to note that hashing has many applications. For example, hashing is suitable for storing passwords and creating digital signatures. 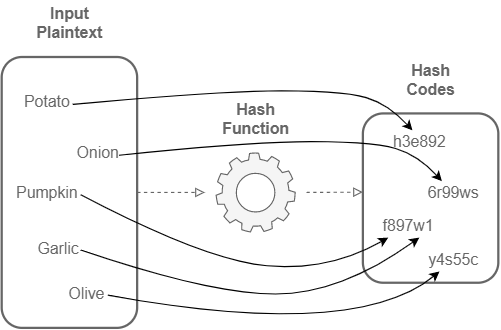 It is relevant to note that a hash function is a one-way function. So, it is not possible to recover the original plaintext input given only a hash code.

A characteristic of hashing is that exists a finite number of hash codes. The hash codes’ length defines this number.

Thus, as the input’s length is variable and non-limited, we map an infinite size set to a finite size set. It means that, at some point, different plaintext inputs will generate the same hash code. This phenomenon calls collision.

However, to solve collisions and get extra security layers, it is possible to execute an operation known as salting for hashing. Salting consists of reducing a hash code in a plaintext (different from the original input) with another one-way function and hashing it again, generating a distinct code from the previous one.

The following image intuitively shows the salting process of hashing:

Rainbow tables emerged as a mid-term solution: they do not require executing all the hashing/reductions operations at every request and provide better security than using a lookup table associating straight hash code with the original plaintext.

Lookup tables, in this context, are basically rainbow tables with non-salted hash codes.

In such a way, the very first step of a rainbow table attack is stealing a list of hashes. Commonly, these hashes contain private information, such as passwords and credit card numbers.

Attackers can steal a list of hashes, for example, by exploiting vulnerabilities of poorly secured databases or by using phishing techniques.

After obtaining the hashes, the attackers compare them with rainbow tables intending to find some match between them and a table entry. If there is a match, the attacker gets the plaintext of the hash.

Usually, a rainbow table attack occurs together with other types of attacks. It happens since it is necessary to access a list of hash codes, which may require other attacking techniques.

Let’s consider a possible scenario: first, the attacker executes an SQL injection in a vulnerable web server to read the database. Next, the attacker searches for a password table and accesses its data. Finally, with the list of password hash codes, the attacker uses rainbow tables to get the plaintext data.

Another possible scenario is executing a distributed denial-of-service attack to breach the security systems (such as firewalls). Thus, the attacker can invade database systems, steal hash code lists, and execute a rainbow table attack.

Besides securing the database keeping the hash codes, other countermeasures can be adopted to avoid rainbow table attacks. We describe some of these countermeasures next:

We can conclude that hashing is an essential technique for the current Internet. However, as well as any security technique, it has some weaknesses explored by malicious attackers. So, to keep our systems safe, it is essential to know these weaknesses and prepare the proper countermeasures to avoid possible attacks.