In our everyday life, we provide different levels of protection for our properties. For instance, let’s consider an office room with a safe box. We can leave less relevant documents on the office’s desk and only lock the door when leaving the room.

The previously described documents will be protected by a physical barrier (the door). However, typically, many people have the keys to your office’s door for many reasons. So, these people can access the documents left on your desk.

In this way, top-secret documents require an extra security layer. This new layer aims to restrict the access of particular documents to a specific group of people. Thus, we can employ the safe box to keep these documents, only disclosing the safe’s combination to authorized people.

The presented scenario is an intuitive analogy of how a Demilitarized Zone (DMZ) works in current networks. In short, a DMZ is a perimeter network that divides an organization’s public and private networks.

In this tutorial, we’ll study the characteristics and architectures of DMZ networks. At first, we’ll explore what exactly a DMZ is and how it works. So, we’ll investigate the implementation architectures of a DMZ. Finally, we’ll discuss the benefits of implementing a DMZ.

2. Demilitarized Zone in a Nutshell

The main objective of a DMZ is to enable an organization to access untrusted networks, such as the Internet, securely. In such a manner, a DMZ isolates internal and private networks from untrusted networks, avoiding unauthorized access to the first ones.

We can cite firewalls as one of the most relevant resources for implementing a DMZ.

In general, we use firewalls to isolate the public Internet from the DMZ and the DMZ from the private network. The rules enforced by these firewalls are typically different according to the isolated system’s segments.

Although firewalls are the core function of a DMZ, we can also employ other functions to improve the security and isolation of the systems. Examples of these functions are Intrusion Detection and Prevention Systems (IPS and IDS), antiviruses, and load balancers, among others.

We can analyze a DMZ concerning about two properties:

Considering a DMZ, we can classify the Internet as an untrusted domain, the demilitarized zone as semi-trusted, and the private network as trusted. So, the more reliability we demand from a system segment, the higher the number of security solutions we should use.

The basic about demilitarized zones is that they intermediate the public Internet and a private network. Furthermore, firewalls control the network traffic incoming and outgoing the system. 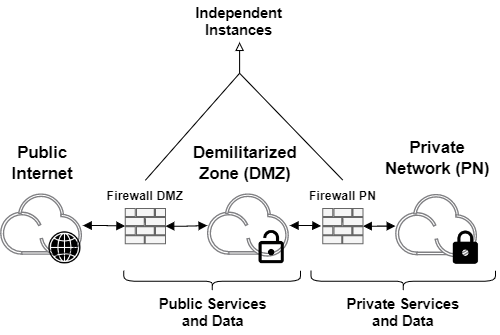 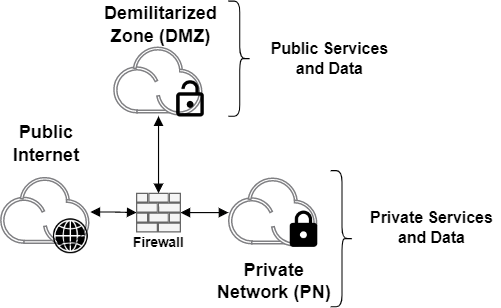 Actually, the main difference is that, in the single-firewalled architecture, the firewall is a single point of failure. In such a way, attackers can focus malicious actions on the firewall to unprotect both the DMZ and the private network.

Furthermore, as a single firewall tackles many rules, it can become a bottleneck faster than when we have two firewalls working in different network segments.

Adopting a single-firewall or double-firewall architecture should consider a cost/risk tradeoff. Moreover, it is relevant to ponderate the capacity to maintain the firewalls updated and configured with the proper set of rules: a single well-configured firewall may be better than two bad configured ones.

Without a doubt, the main benefit of implementing a DMZ consists of setting an extra security layer between public and private networks. However, in addition to this principal benefit, we can analyze other ones that make implementing a DMZ a very promising idea:

In this tutorial, we studied the technical details and implementation architectures of demilitarized zones. First, we reviewed the purposes of a DMZ and its most relevant operational characteristics. Thus, we investigated some popular architectures to implement a DMZ. Finally, we explored the specific benefits of setting up a DMZ in the context of organizations’ networks.

We can conclude that well-designed demilitarized zones can improve the security and arrangement of organizations’ networks by segmenting them into multiple layers.

Different policies can secure particular services and data by creating public and private layers in the organizations’ networks. These policies may include, for example, submitting the network traffic to several security network functions and requiring user credentials to access resources.