In this tutorial, we’ll study the difference between gradient descent and gradient ascent.

At the end of this article, we’ll be familiar with the difference between the two and know how to convert from one to the other.

2. The Gradient in General

The gradient of a continuous function

is defined as the vector that contains the partial derivatives

computed at that point

. The gradient is finite and defined if and only if all partial derivatives are also defined and finite. With formal notation, we indicate the gradient as:

When using the gradient for optimization, we can either conduct gradient descent or gradient ascent. Let’s now see the difference between the two.

Gradient descent is an iterative process through which we optimize the parameters of a machine learning model. It’s particularly used in neural networks, but also in logistic regression and support vector machines.

It’s the most typical method for iterative minimization of a cost function. Its major limitation, though, consists of its guaranteed convergence to a local, not necessarily global, minimum: 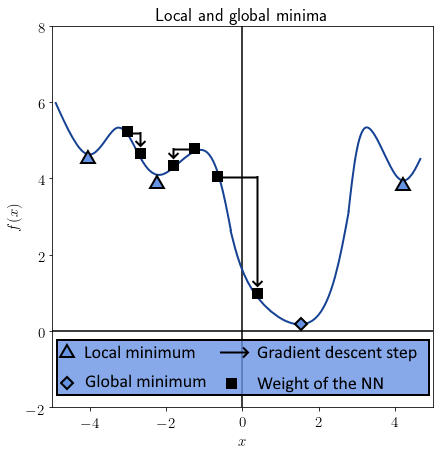 , also called the learning rate, allows the fine-tuning of the process of descent. In particular, with an appropriate choice of

, we can escape the convergence to a local minimum, and descend towards a global minimum instead.

The gradient is calculated with respect to a vector of parameters for the model, typically the weights

. In neural networks, the process of applying gradient descent to the weight matrix takes the name of the backpropagation of the error.

, we iteratively optimize the vector

And this is the graphical representation: 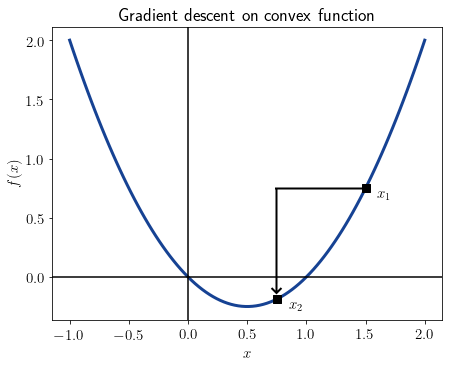 We can read the formula above like this. At step

, the weights of the neural network are all modified by the product of the hyperparameter

Gradient ascent works in the same manner as gradient descent, with one difference. The task it fulfills isn’t minimization, but rather maximization of some function. The reason for the difference is that, at times, we may want to reach the maximum, not the minimum of some function; this is the case, for instance, if we’re maximizing the distance between separation hyperplanes and observations.

For this reason, the formula that describes gradient ascent is similar to the one for gradient descent. Only, with a flipped sign:

on which we apply gradient descent, there is a symmetric function

on which we can apply gradient ascent.

This means also that a problem tackled through gradient descent also has solutions that we can find through gradient ascent, if only we reflect it upon the axis of the independent variable. This image shows the same function of the previous graph, but reflected along the 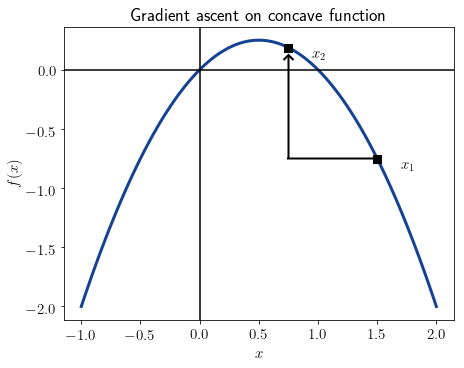 This is because gradient descent works on convex objective functions, while gradient ascent requires concave functions.

We can now sum-up the considerations made above:

With this said, gradient descent is more common in practice than gradient ascent.

In this tutorial, we studied the concept of gradient, and learned the distinction between gradient descent and gradient ascent.