In this tutorial, we’ll study the similarities and differences between linear and logistic regression.

We’ll start by first studying the idea of regression in general. In this manner, we’ll see the way in which regression relates to the reductionist approach in science.

We’ll then study, in order, linear regression and logistic regression. We’ll also propose the formalization of the two regression methods in terms of feature vectors and target variables.

Lastly, we’ll study the primary differences between the two methods for performing regression over observables. At the end of this tutorial, we’ll then understand the conditions under which we prefer one method over the other.

2. The Idea of Regression in Statistics

There’s an idea in the philosophy of science that says that the world follows rules of a precise and mathematical nature. This idea is as old as both philosophy and science and dates back to Pythagoras who attempted to reduce the complexity of the world to relationships between numbers. In modern times, this idea assumed the name of reductionism and indicates the attempts to extract rules and patterns that connect observations with one another.

The implicit assumption under reductionism is that it’s possible to study the behavior of subsystems of a system independently from the overall behavior of the whole, broader system:

The opposite idea to that of reductionism is called emergence and states, instead, that we can only study a given system holistically. This means that, no matter how accurate we are in summing up and independently analyzing the behavior of the system’s components, we’ll never understand the system as a whole:

We can methodologically treat under regression analysis any problem that we can frame under reductionism, but if we can’t do the latter then we also can’t do the former.

After discussing the epistemological preconditions of regression analysis, we can now see why do we call it in that manner anyway. The word regression, in its general meaning, indicates the descent of a system into a status that is simpler than the one held before. From this, we can get a first intuition that frames regression as the reduction of the complexity of a system into a more simple form.

A second intuition may come by studying the origin, or rather the first usage of the term in statistical analysis. While studying the height of families of particularly tall people, Galton noticed that the nephews of those people systematically tended to be of average height, not taller. This led to the idea that variables, such as height, tended to regress towards the average when given enough time.

As of today, regression analysis is a proper branch of statistical analysis. The discipline concerns itself with the study of models that extract simplified relationships from sets of distributions. Linear and logistic regression, the two subjects of this tutorial, are two such models for regression analysis.

2.3. Components of a Model for Regression

The specific type of model that we elect to use is influenced, as we’ll see later, by the type of variables on which we are working. But regardless of this, regression analysis is always possible if we have two or more variables.

In other words, if

describes a dependent variable and

a vector containing the features of a dataset, we assume that there exists a relationship

between these two. Regression analysis then lets us test whether this hypothesis is true.

We can also imagine this relationship to be parametric, in the sense that it also depends on terms other than

. In this case, we can denote these terms as

and call them “parameters” of the regression. In this case, the function

then assumes the form

Lastly, we can also imagine that the measurements from which we derived the values of

are characterized by measurement errors. We discussed the problem of systematic error in measurements in our article on the biases for neural networks; but here we refer to random, not systematic, types of error. We can then call this error

and treat it as causally-independent from the variables that we observe.

2.5. The General Model for Regression

We can finally construct a basic model for the relationship between variables that we study under regression analysis. We can thus define:

Under these definitions, regression analysis identifies the function

Regression analysis can tell us whether two or more variables are numerically related to one another. However, it doesn’t say anything about the validity of the causal relationship that we presume to exist between them. Simply put, we postulate the assumption of causality before we even undertake regression analysis.

If we find a good regression model, this is sometimes evidence in favor of causality. In that case, we can then say that maybe the variables that we study are causally related to one another.

If we don’t find a well-fitting model, we normally assume that no causal relationship exists between them. However, the scientific literature is full of examples of variables that were believed to be causally related whereas they in fact weren’t, and vice versa.

It’s therefore extremely important to keep in mind the following. Having a good regression model over some variables doesn’t necessarily guarantee that these two variables are related causally. If we don’t keep this in mind, we then risk assigning causality to phenomena that are clearly unrelated: 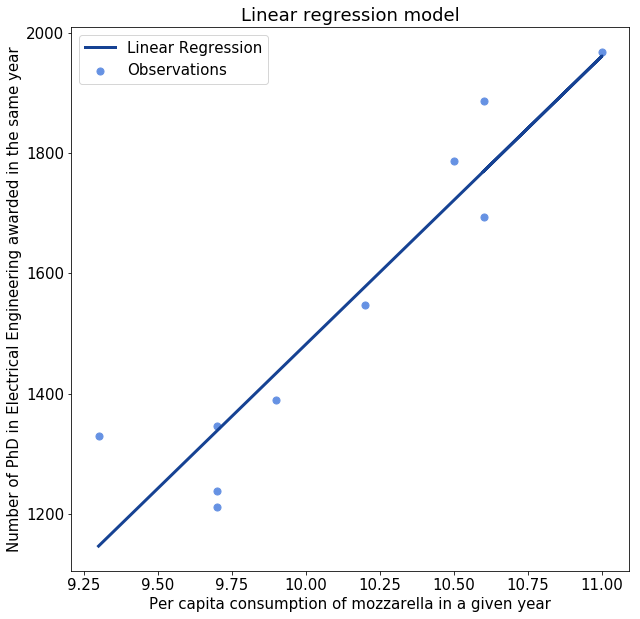 3.1. The Formula for Simple Linear Models

Let’s suppose that the two variables

that we’re studying have equal dimensionality, such that

. Let’s now imagine that a linear relationship exists between

, which implies the existence of two parameters

. The relationship is perfectly linear if, for any element

We can formalize the previous statement by saying that a model is linear if:

independently of any values of

. The question of whether

is true or false, then is independent of

. This means that for

we’re no longer talking about two variables, but only one.

We can, therefore, say that the model is undefined for that parameter

, but for all other values of

the model is otherwise defined. The following are all valid examples of linear models with different values for their 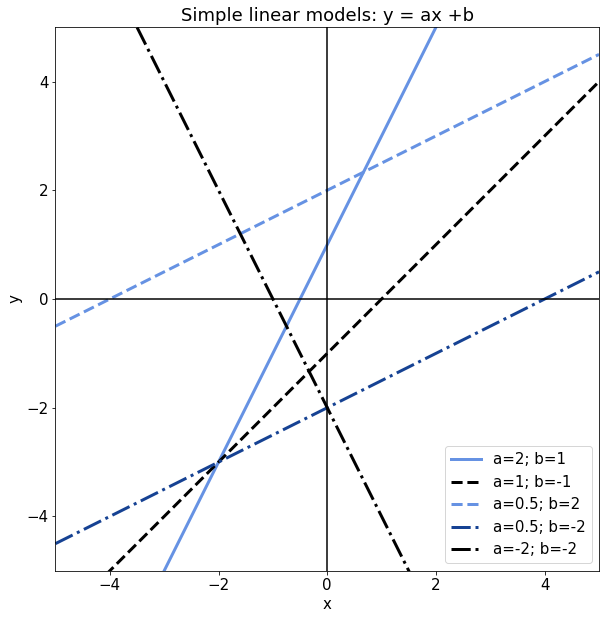 3.2. From Linear Models to Linear Regression

Let’s now imagine that the model doesn’t fit perfectly. This means that, if we calculate for a given

, then there’s at least one

In this case, we can compute a so-called error between

, the prediction of our linear model, and

, the observed value of the variable. We can call this error

of a linear function, such that

. The additional constraint is that we want this error term

to be as small as possible, according to some kind of error metric.

The typical error metric used in linear regression is the sum of the squared errors, which is computed as:

The problem of identifying the linear regression model for two variables

can thus be reformulated as the finding of the parameters

which minimize the sum of squared errors. In other words, the problem becomes the identification of the solution to:

3.3. Computing the Solution to Linear Regression

The solution to this problem can be found easily. We can compute first the parameter

are the average values for the variables

, we can then identify

that we have thus computed, correspond to the parameters of the model

that minimize the sum of squared errors.

, by taking into account that they refer to a linear model. In linear regression, as well as in their related linear model,

refer respectively to the slope of a line and to its intercept: 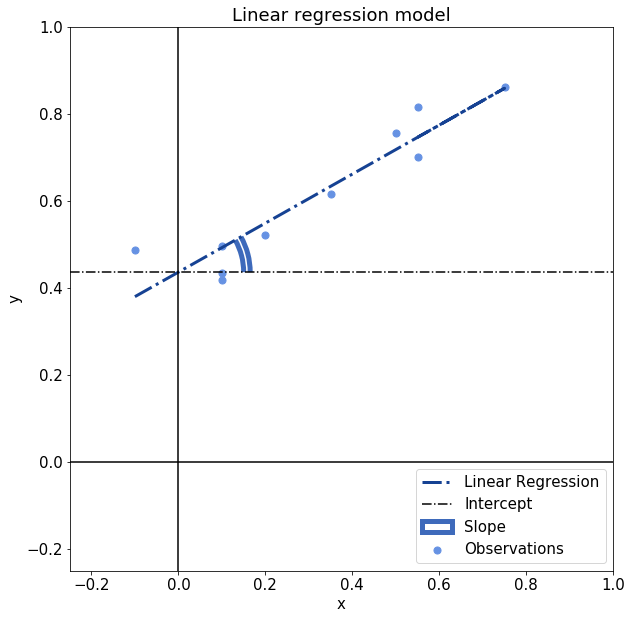 Lastly, in the specific context of regression analysis, we can also imagine the parameter

as being related to the correlation coefficient

, according to the formula

refer respectively to the uncorrected standard deviations of

. Correlation is, in fact, another way to refer to the slope of the linear regression model over two standardized distributions.

4.1. The Formula for a Logistic Function

We can now state the formula for a logistic function, as we did before for the linear functions, and then see how to extend it in order to conduct regression analysis. As was the case for linear regression, logistic regression constitutes, in fact, the attempt to find the parameters for a model that would map the relationship between two variables to a logistic function.

A logistic function is a function of the form

is, as was before the the linear model, an independent variable. This function allows the mapping of any continuously distributed variable

to the open interval

. The graph associated with the logistic function is this:

The logistic function that we’re showing is a type of sigmoidal function. The latter is particularly important in the context of non-linear activation functions for neural networks. It’s also, however, the basis for the definition of the Logit model, which is the one that we attempt to learn while conducting logistic regression, as we’ll see shortly.

4.2. Characteristics of the Logistic Function

Since the codomain of the logistic function is the interval

If a dependent variable is Bernoulli-distributed, this means that it can assume one of two values, typically 0 and 1. The input to the logistic function, instead, can be any real number. This makes the logistic function particularly adapted for applications where we need to compress a variable with domain

to a finite interval.

Because we can presume the dependent variable in a logistic model to be Bernoulli-distributed, this means that the model is particularly suitable for classification tasks. In that context, the value of 1 corresponds to a positive class affiliation. Symmetrically, the value of zero corresponds to the incorrect classification. This makes, in turn, the logistic model suitable for conducting machine-learning tasks that involve unordered categorical variables.

. This corresponds laregely to the linear model we studied above.

In that model, as in here,

is a vector of parameters and

contains the independent variables. A link function such as Logit then relates a distribution, in this case, the Binomial distribution, to the generalized linear model.

In using the Logit model, we receive a real value that returns a positive output over a certain threshold for the model’s input. This, in turn, triggers the classification: 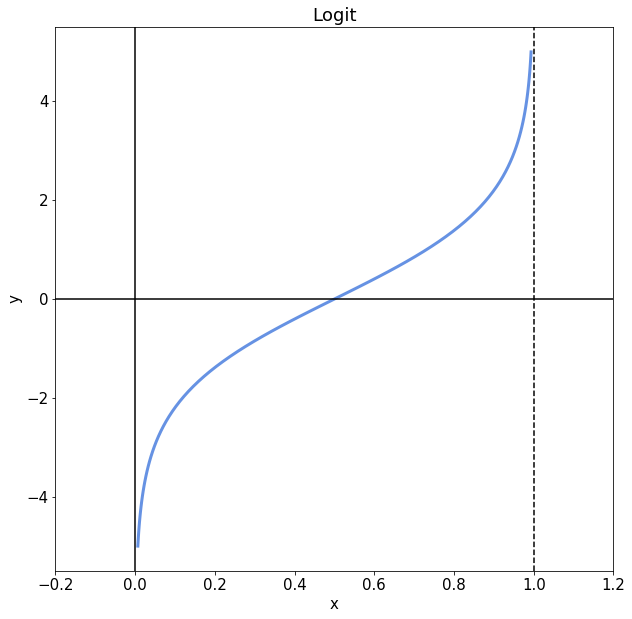 The question now becomes, how do we learn the parameters

of the generalized linear model? In the case of logistic regression, this is normally done by means of maximum likelihood estimation, which we conduct through gradient descent.

We define the likelihood function

by extending the formula above for the logistic function. If

is the vector that contains that function’s parameters, then:

also takes the name of log-likelihood. We can now identify this maximum to an arbitrary degree of precision with a step-by-step process of backtracking. This is because, in correspondence to the maximum of the log-likelihood, the gradient is zero. This means that the values of the parameters that satisfy this condition can be found by repeatedly backtracking until we’re satisfied with the approximation.

5. Differences Between Linear and Logistic Regression

The similarities, instead, are those that the two regression models have in common with general models for regression analysis. We discussed these in detail earlier, and we can refer to them in light of our new knowledge.

In this article, we studied the main similarities and differences between linear and logistic regression.

We started by analyzing the characteristics of all regression models and to regression analysis in general.

Then, we defined linear models and linear regression, and the way to learn the parameters associated with them. We do this by means of minimization of the sum of squared errors.

Finally, we identified in a short form the main differences between the two models. These differences related to both their peculiar characteristics and their different usages.