In this tutorial, we’re going to study the reasons why we use a logarithmic expression for the error function of a logistic regression model.

To do so, we’re first going to discuss the problem of algorithmic learning in general. This will let us know what are the conditions required to guarantee that any given function can be learned through gradient descent.

Subsequently, we’ll define the mathematical formulation of a model for logistic regression. In connection to this, we’ll also define the likelihood function of this model and study its properties. This will let us understand why it’s not guaranteed that, in general, we can always learn that model’s parameters.

Lastly, we’ll study the logarithmic variation of the likelihood function. In doing so, we’ll learn what is the difference between likelihood and log-likelihood in terms of the learnability of their parameters.

At the end of this tutorial, we’ll have a deep theoretical understanding as to the reason why we use a logarithmic function to learn the parameters of a logistic regression model, in relation to the general problem of the learnability of a function.

2.1. The Problem of Learning Parameters

Before we get into the specificity of logistic regression and its associated error function, it’s important to spend a few words on the subject of algorithmic learning of parameters in models in general. There’s, in fact, a simple explanation as to why we choose a logarithmic function as an error function for logistic models instead of simply mean squared error.

This explanation, however, requires us to understand what characteristics we expect an error function to possess in machine learning models.

2.2. Gradient Descent and Its Requirements

Gradient descent is an algorithmic way to find a minimum point in a differentiable function that doesn’t require knowledge of the shape of that function but only of its partial derivatives. This algorithm can be applied to any function

and, provided that we satisfy its requirements, guarantees convergence.

This means that if a minimum exists for a function that satisfies some conditions, we can then approximate it to an arbitrary degree of precision. These conditions are:

If a function meets these conditions, we can then find a value

is the value of

, indicating the level of approximation, is instead any arbitrarily chosen value.

In other words, this means that if an objective function and its gradient satisfy the conditions listed, we can then always find through gradient descent a point of the function that is as close as we desire to its minimum. We can thus reformulate the problem of choosing a cost function for the logistic regression into the problem of choosing a cost function on which we can apply gradient descent.

3.1. A Review on the Logistic Function

In our previous article on the difference between linear and logistic regression, we discussed how a logistic model maps a generalized linear function of the form

to the open interval

. This model is, therefore, a continuous mapping of the form

. The most typical of these maps is the logistic function, which can in turn be written as:

shape which made it famous:

The generalized linear model can however have parameters

that differ from the two indicated above. In that case, even though the general

shape is still present, the values assumed by the function can vary wildly. Here we can see some examples of different logistic models with a one-dimensional independent variable: 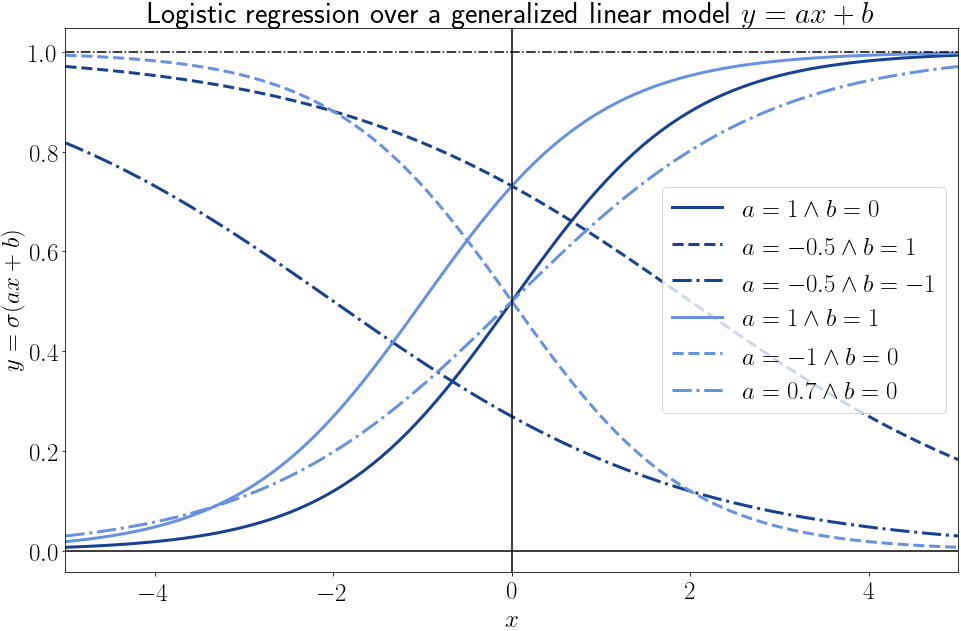 In general, we can affirm that for any point

there are infinite logistic models of the form

that pass through that point. Each of them corresponds to a given combination of values for the pair of parameters

This means that, if we only take one observation from those present in a dataset, we can’t really infer much about the parameters of the best-fitting logistic model: 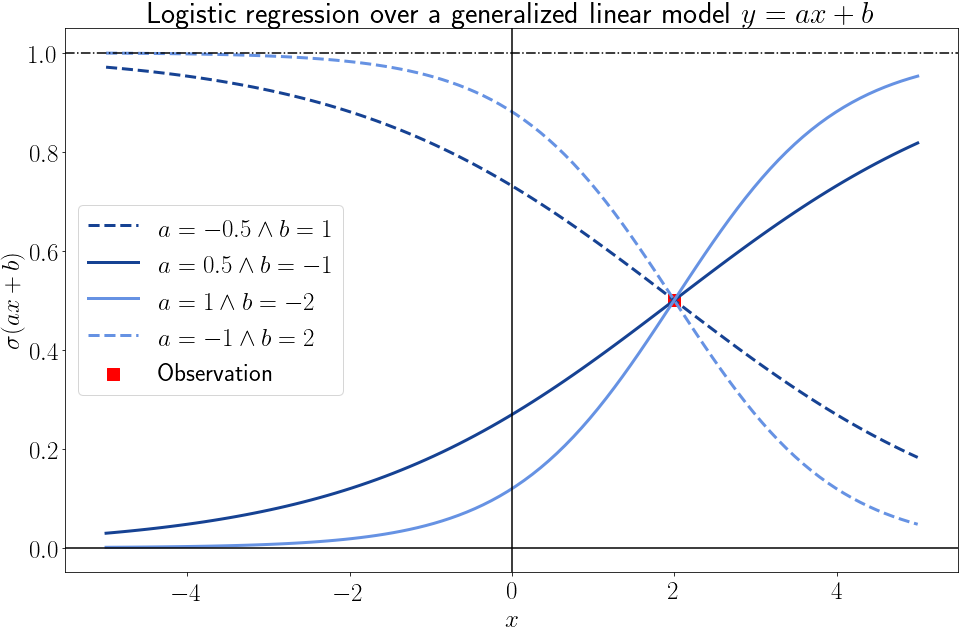 As the number of observations starts to increase, however, we can progressively narrow down the parameters of the model that best fits them. This lets us go down from the many possible models to one best-fitter: 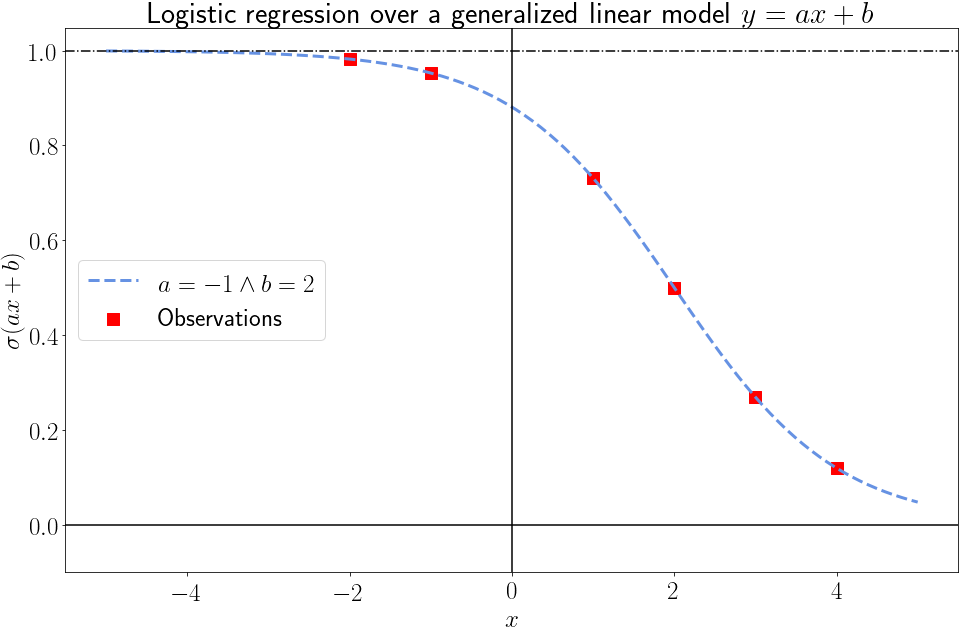 This is, in essence, the idea behind logistic regression. In real-world datasets, however, no single model will perfectly fit any given set of independent and dependent variables. This is due to two main reasons:

As a consequence of this, we expect even the best-fitting model to have non-zero prediction errors. The problem of finding the parameters for the best-fitting logistic model can then be shifted towards the problem of finding the parameters of the model that minimizes some kind of error metrics. We’ll see shortly what do we mean by that, with regards to various possible error functions.

3.4. The Mathematical Definition of Logistic Regression

We can now sum up the main characteristics of the logistic regression in a more formalized manner. From this, we’ll first build the formal definition of a cost function for a logistic model, and then see how to minimize it.

A logistic model is a mapping of the form

We also presume the function

to refer, in turn, to a generalized linear model

is the same vector as before and

indicates the parameters of a linear model over

. In this case, we can rewrite

; i.e., there’s one more parameter in

than there are variables in

. This is because we can treat the intercept or constant term of a linear model as the coefficient of a variable with exponent zero, since

. Or, equivalently, we can impose

and obtain the same result.

We can now write

in algebraic form as

as a logistic function over

with its algebraic equivalent we can then obtain:

which is the logistic regression in its parametric form. Since

is Bernoulli-distributed, the common interpretation is to consider

as the probability function of

can only assume the two values of 0 or 1, we can also calculate

. For a given observation

, we can then rewrite the probability as:

Lastly, we can calculate the likelihood function

, by multiplying over all the observations of the distributions

can assume only the values of 0 and 1, we can then rewrite the formula as:

4. Cost Function of the Logistic Regression

4.1. Why Not Using Mean Squared Error?

The problem is now to estimate the parameters

that would minimize the error between the model’s predictions and the target values. In other words, if

is the prediction of the model for

is the error metric we use.

Let’s now imagine that we apply to this logistic model the same error function that’s typical for linear regression models. This function normally consists of the mean squared error (

) between the model’s predictions and the values of the target variable. We can write

4.2. The Problem of Convexity

For the case of the linear model,

was guaranteed to be convex because it was a linear combination of a prediction function that was also composed. For the case of logistic regression,

isn’t guaranteed to be convex because it’s a linear combination between scalars and a function, the logistic function, that’s also not convex.

As an example, this is the general shape of the decision function

, for the specific case of

And this is the convexity associated with 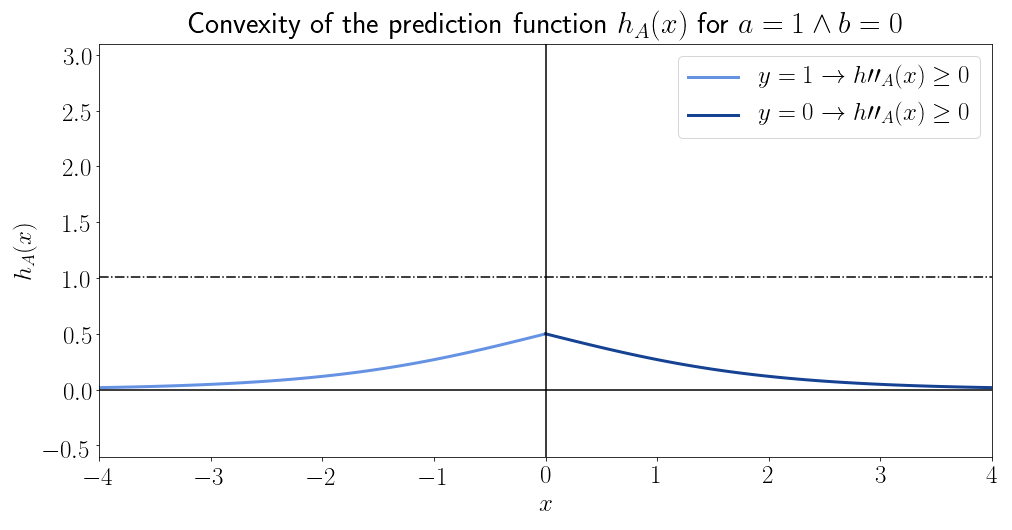 We can see that the decision function isn’t generally convex, but only in a specific subset of its domain.

4.3. The Logarithm of the Prediction Function

This means that we can’t use the mean squared error as an error metric for the logistic model. Let’s consider instead the logarithm of the prediction function,

. These functions are, interestingly for us, guaranteed to never be convex: 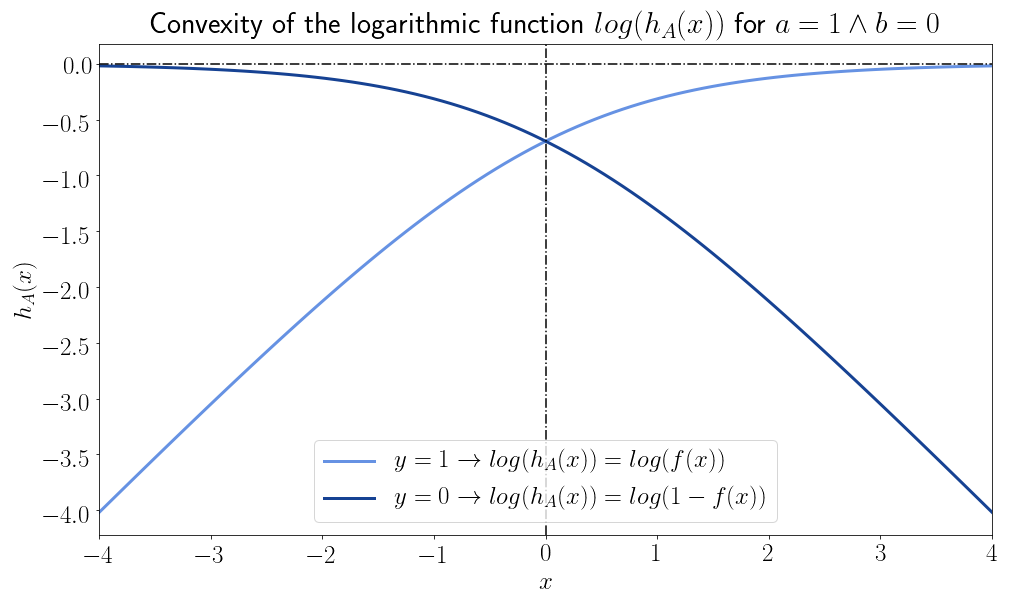 If we, however, flip them around by means of a vertical reflection over the horizontal axis, the two functions then become always and only convex: 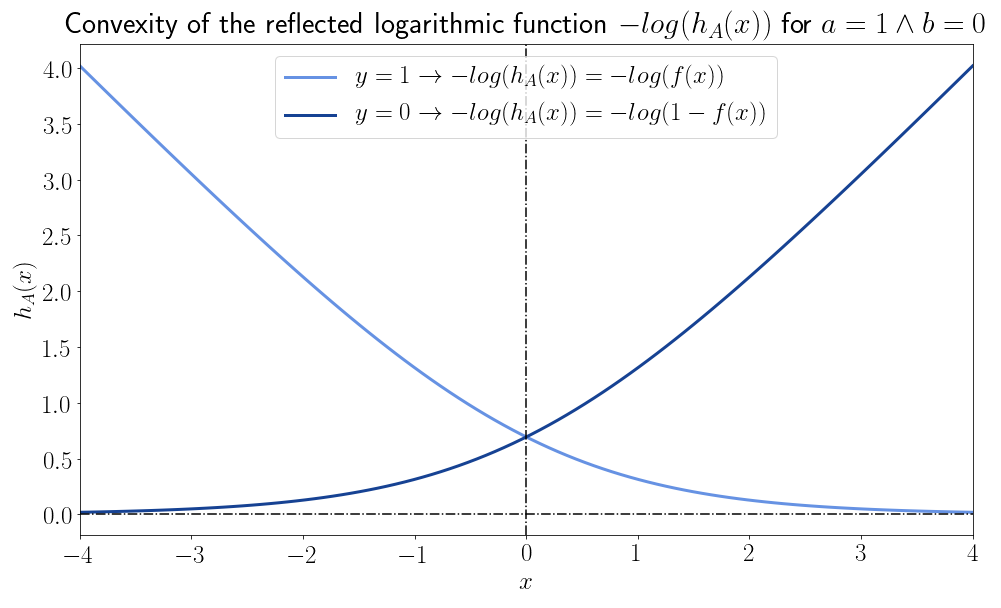 This implies that we can define an error function

that has the form of

We can rewrite the problem of optimization in terms of the minimization of this function over all the observed samples, as:

We can now sum up the reasoning that we conducted in this article in a series of propositions that represent the theoretical inference that we’ve conducted:

We, therefore, elect to use the log-likelihood function as a cost function for logistic regression. On it, in fact, we can apply gradient descent and solve the problem of optimization.

In this article, we studied the reasoning according to which we prefer to use logarithmic functions such as log-likelihood as cost functions for logistic regression.

Lastly, we studied the characteristics of the logarithmic version of that function. Because of its guaranteed convexity, we argued that it’s preferable to use that instead of the mean squared error.