In this tutorial, we'll explore the main idea behind logistic regression.

First, let's start with a brief overview of ML paradigms and algorithms.

ML allows us to solve problems that we can formulate in human-friendly terms. However, this fact may represent a challenge for us software developers. We've accustomed ourselves to address the problems that we can formulate in computer-friendly terms. For example, as human beings, we can easily detect the objects on a photo or establish the mood of a phrase. How we could formulate such a problem for a computer?

In order to come up with a solution, in ML there is a special stage called training. During this stage, we feed the input data to our algorithm so that it tries to come up with an optimal set of parameters (the so-called weights). The more input data we may feed to the algorithm, the more precise predictions we may expect from it.

Training is a part of an iterative ML workflow:

We start with acquiring data. Often, the data comes from different sources. Therefore, we have to make it be of the same format. We should control as well that the data set fairly represents the domain of study. If the model has never been trained on red apples, it can hardly predict it.

Next, we should build a model that'll consume the data and will be able to make predictions. In ML, there are no pre-defined models that work well in all situations.

When searching for the correct model, it might easily happen that we build a model, train it, see its predictions and discard the model because we're not happy with the predictions it makes.  In this case, we should step back and build another model and repeat the process again.

In ML, based on what kind of input data we have at our disposal, we may single out three main paradigms:

The case that we're going to describe in this tutorial belongs to supervised learning.

In ML, there is a set of tools that we can apply when building a model. Let's mention some of them:

We may combine several tools when building a model that has high predictiveness. In fact, for this tutorial, our model will use logistic regression and neural networks.

Even though Java is not the most popular language for prototyping ML models, it has a reputation as a reliable tool for creating robust software in many areas including ML. Therefore, we may find ML libraries written in Java.

In this context, we may mention the de-facto standard library Tensorflow which has a Java version as well. Another worth mentioning is a deep learning library called Deeplearning4j. This is a very powerful tool and we're going to use it in this tutorial, too.

The main idea of logistic regression is to build a model that predicts the labels of the input data as precisely as possible.

If we are not happy with that minimum value, we should build another model and perform the training again.

In order to see logistic regression in action, we illustrate it on the recognition of handwritten digits. This problem has already become a classical one. Deeplearning4j library has a series of realistic examples which show how to use its API. The code-related part of this tutorial is heavily based on MNIST Classifier. 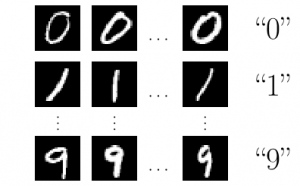 In order to estimate the efficiency of the model that we're going to build, we split the input data into training and test sets:

Once we have the input images labeled and split into the two sets, the “data elaboration” stage is over and we may pass to the “model building”.

As we've mentioned, there are no models that work well in every situation. Nevertheless, after many years of research in ML, scientists have found models that perform very well in recognizing handwritten digits. Here, we use the so-called LeNet-5 model.

LeNet-5 is a neural network that consists of a series of layers that transform the 28×28 pixel image into a ten-dimensional vector:

The ten-dimensional output vector contains probabilities that the input image's label is either 0, or 1, or 2, and so on.

For example, if the output vector has the following form:

Let's dive into details of model building. We omit Java-specific details and concentrate on ML concepts.

We set up the model by creating a MultiLayerNetwork object:

In its constructor, we should pass a MultiLayerConfiguration object. This is the very object that describes the geometry of the neural network. In order to define the network geometry, we should define every layer.

Let's show how we do this with the first and the second one:

We see that layers' definitions contain a considerable amount of ad-hoc parameters which impact significantly on the whole network performance. This is exactly where our ability to find a good model in the landscape of all ones becomes crucial.

Now, we are ready to construct the MultiLayerConfiguration object:

that we pass to the MultiLayerNetwork constructor.

The model that we constructed contains 431080 parameters or weights. We're not going to give here the exact calculation of this number, but we should be aware that just the first layer has more than 24x24x20 = 11520 weights.

The training stage is as simple as:

Initially, the 431080 parameters have some random values, but after the training, they acquire some values that determine the model performance. We may evaluate the model's predictiveness:

The LeNet-5 model achieves quite a high accuracy of almost 99% even in just a single training iteration (epoch). If we want to achieve higher accuracy, we should make more iterations using a plain for-loop:

Now, as we trained the model and we are happy with its predictions on the test data, we can try the model on some absolutely new input. To this end, let's create a new class MnistPrediction in which we'll load an image from a file that we select from the filesystem:

The variable image contains our picture being reduced to 28×28 grayscale one. We can feed it to our model:

The variable output will contain the probabilities of the image to be zero, one, two, etc.

Let's now play a little bit and write a digit 2, digitalize this image and feed it the model. We may get something like this:

As we see, the component with maximal value 0.99 has index two. It means that the model has correctly recognized our handwritten digit.

In this tutorial, we described the general concepts of machine learning. We illustrated these concepts on logistic regression example which we applied to a handwritten digit recognition.

As always, we may find the corresponding code snippets on our GitHub repository.