In this tutorial, we’ll learn about the k-Nearest Neighbors algorithm. It is a fundamental machine learning model. We can apply for both classification and regression tasks. Yet, applying it to classification tasks is more common.

We’ll explore how to choose the

value and distance metric to increase accuracy. Then, we’ll analyze how the algorithm behaves on high-dimensional data sets. We’ll conclude by mentioning potential cures for issues related to high dimensionality.

The k-Nearest Neighbors (k-NN) algorithm assumes similar items are near each other. So, we decide on a data point by examining its nearest neighbors.

To predict the outcome of a new observation, we evaluate the

nearest past observations. We base the prediction on these neighboring observations’ values. We can directly take an average or use a weighted average.

The k-NN algorithm has several advantages:

On the other side, there are some disadvantages:

It is a common practice to choose

as an odd number to eliminate possible ties. Even

values can lead to equal numbers of votes in binary classification.

The choice of hyper-parameter 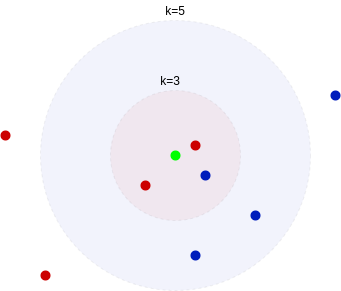 values leads to different classification outcomes. So, deciding on the

value is an important step when employing the k-NN algorithm.

Resultingly, the choice of

affects the shape of the decision boundary:

value leads to high bias by classifying everything as the more probable class. As a result, we have a smooth decision boundary between the classes, with less emphasis on individual points.

values cause high variance and an unstable output. Minor changes in the training set cause large changes in classification boundaries. The effect is more visible on intersecting classes:

Hence, we need to select the

value based on test and validation sets by observing the outputs. The training and validation errors give a good hint on the behavior of the k-NN classifier.

The training error is minimal (0) for

grows, the training error grows as expected. On the other hand, the validation error is high for too small and too large

values. A good choice for the

value is where we have the minimal validation error: 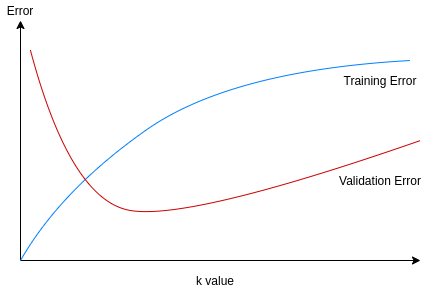 The metric used for the distance calculation is not a hyper-parameter for the k-NN algorithm. Still, the distance metric selection changes the outcome and affects the success of the model.

Euclidean distance is the most popular distance metric to calculate distances between data points. However, we need to choose a distance metric depending on the size and dimensions of the dataset at hand.

Let’s explore some well known and commonly used metrics. Minkowski distance is a generalized metric to measure the distance between two points x and y in n dimensional space:

Manhattan distance (city-block or L1 distance) is a special case of Minkowski, where we set p=1:

In other words, the distance between x and y is the sum of absolute differences between their Cartesian coordinates.

Euclidean Distance is another special case of the Minkowski distance, where p=2:

It represents the distance between the points x and y in Euclidean space.

Chebyshev distance is when we have

We can use all variations of the Minkowski difference on real-valued vector spaces. Increasing the

value is more favorable. Because calculating the distance is faster with smaller

values.. Hence, the Manhattan distance is the best option for very high-dimensional datasets.

Hamming distance is a distance measure that we can use for integer-valued vector spaces besides real-valued vectors. It’s usually utilized for comparing strings of equal length by measuring the distance between non-equal characters.

Jaccard distance is a measure suitable to find the distance between boolean-valued vectors. It calculates the overlapping features over the entire sample set.

The cosine similarity measure is not a metric, as it doesn’t hold the triangle equality. Yet, it is adopted to classify vector objects such as documents and gene sequences. It measures the frequency of a particular instance in a feature.

k-NN algorithm’s performance gets worse as the number of features increases. Hence, it’s affected by the curse of dimensionality. Because, in high-dimensional spaces, the k-NN algorithm faces two difficulties:

As the number of features increases, the distance between data points becomes less distinctive. Moreover, the total area we need to cover to find

Let’s consider a simple setting where our dataset has

number of features, and each feature has a value in the range [0, 1]. We fix

(number of observations) to 1000. Let’s further assume that each feature’s values are uniformly distributed.

In this setting, let’s find out the length of a side of a cube containing

If we increment f to

As we keep incrementing

We see that with

Still, there are ways to represent a dataset in lower dimensions without losing the fundamental structure. Let’s have a look at potential cures:

We can use a feature selection technique to eliminate more redundant features from the dataset. This method ensures that we only keep the most relevant features.

Alternatively, we can use feature extraction to map the data into a low-dimensional space. The new feature set is not necessarily a subset of the original components. Typically, the new features are generated by combining the existing ones. For example, principal component analysis (PCA) applies linear mapping to maximize information over a minimal number of features.

PCA and kernel methods are especially beneficial when the true dimensionality of the dataset is lower than the actual representation. For example, we can represent the points on a 2-dimensional plane in 3D space with 2 features after a mapping.

Another data reduction technique is to represent data in smaller forms with fewer observations. Numerosity reduction algorithms help with k-NN performance as the number of calculations decreases.

Locality sensitive hashing (LSH) algorithm hashes similar items into high-probability buckets. We expect similar items to end up in the same buckets at the end, as the name suggests.

The use of hash tables is easy and efficient, both for querying and data generation. This way, the LSH method is used to find approximate nearest neighbors fast.

). Therefore, the mapping preserves the Euclidean distances. So, running the k-NN algorithm generates the same result at a much lower cost.

In this article, we’ve explored the k-NN algorithm. We’ve analyzed how a change in a hyper-parameter affects the outcome and how to tune its hyper-parameters.

Then, we’ve examined the k-NN algorithm’s behavior on high-dimensional data sets. Last, we’ve discussed how we can overcome performance issues by the use of approximation algorithms.