In this tutorial, we'll look at the basic concepts of a graph as a data structure.

We'll also explore its implementation in Java along with various operations possible on a graph. We will also discuss the Java libraries offering graph implementations.

Checking if a Java Graph has a Cycle

Learn how to check if a cycle exists in a given directed graph in Java.
Read more →

Learn how to use JGraphT to create graphs and explore the variety of graph algorithms.
Read more →

A graph is a data structure for storing connected data such as a network of people on a social media platform.

A graph consists of vertices and edges. A vertex represents the entity (e.g., people) and an edge represents the relationship between entities (e.g., a person's friendships).

Let's define a simple Graph to understand this better: 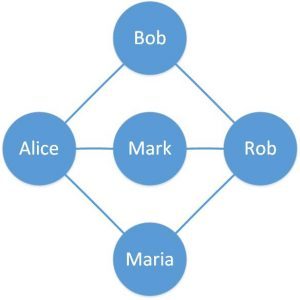 There are a few variations of this simple graph depending on the properties of the edges. Let's briefly go through them in the next sections.

However, we'll only focus on the simple graph presented here for the Java examples in this tutorial.

The graph we've defined so far has edges without any direction. If these edges feature a direction in them, the resulting graph is known as a directed graph.

An example of this can be representing who sent the friend request in a friendship on the online portal: 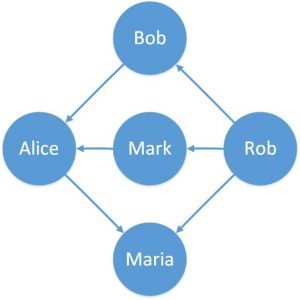 Here we can see that the edges have a fixed direction. The edges can be bidirectional as well.

Again, our simple graph has edges that are unbiased or unweighted.

If instead these edges carry relative weight, this graph is known as a weighted graph.

An example of a practical application of this can be representing how relatively old a friendship is on the online portal: 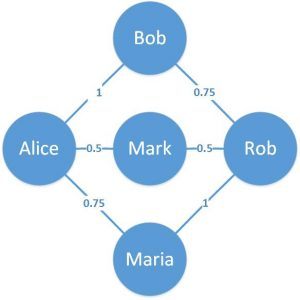 Here we can see that the edges have weights associated with them. This provides a relative meaning to these edges.

A graph can be represented in different forms such as adjacency matrix and adjacency list. Each one has their pros and cons in a different setup.

We'll introduce these graph representations in this section.

An adjacency matrix is a square matrix with dimensions equivalent to the number of vertices in the graph.

The elements of the matrix typically have values 0 or 1. A value of 1 indicates adjacency between the vertices in the row and column and a value of 0 otherwise.

Let's see what the adjacency matrix looks like for our simple graph from the previous section: 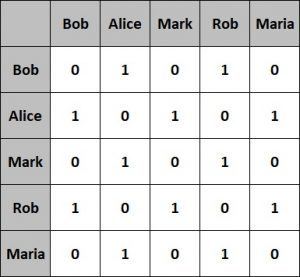 This representation is fairly easier to implement and efficient to query as well. However, it's less efficient with respect to space occupied.

An adjacency list is nothing but an array of lists. The size of the array is equivalent to the number of vertices in the graph.

The list at a specific index of the array represents the adjacent vertices of the vertex represented by that array index. 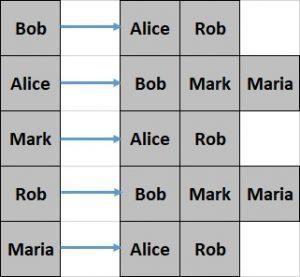 This representation is comparatively difficult to create and less efficient to query. However, it offers better space efficiency.

We'll use the adjacency list to represent the graph in this tutorial.

Java doesn't have a default implementation of the graph data structure.

However, we can implement the graph using Java Collections.

Let's begin by defining a vertex:

The above definition of vertex just features a label, but this can represent any possible entity such as Person or City.

Also, note that we have to override the equals() and hashCode() methods as these are necessary to work with Java Collections.

As we discussed earlier, a graph is nothing but a collection of vertices and edges that can be represented as either an adjacency matrix or an adjacency list.

Let's see how we can define this using an adjacency list here:

As we can see, the class Graph is using Map from Java Collections to define the adjacency list.

There are several operations possible on a graph data structure, such as creating, updating or searching through the graph.

We'll go through some of the more common operations and see how we can implement them in Java.

To start with, we'll define some methods to mutate the graph data structure.

These methods simply add and remove elements from the vertices Set.

Now let's also define a method to add an edge:

This method creates a new Edge and updates the adjacent vertices Map.

In a similar way, we'll define the removeEdge() method:

Next, let's see how we can create the simple graph we drew earlier using the methods we've defined so far:

Finally, we'll define a method to get the adjacent vertices of a particular vertex:

Now that we have the graph data structure and functions to create and update it defined, we can define some additional functions for traversing the graph.

We need to traverse a graph to perform any meaningful action, such as search within the graph.

A depth-first traversal starts at an arbitrary root vertex and explores vertices as deep as possible along each branch before exploring vertices at the same level.

Let's define a method to perform the depth-first traversal:

Here, we're using a Stack to store the vertices that need to be traversed.

Let's run this on the graph we created in the previous subsection:

Please note that we're using vertex “Bob” as our root for traversal here, but this can be any other vertex.

Comparatively, a breadth-first traversal starts at an arbitrary root vertex and explores all neighboring vertices at the same level before going deeper in the graph.

Now let's define a method to perform the breadth-first traversal:

Note that a breadth-first traversal makes use of Queue to store the vertices that need to be traversed.

Let's again run this traversal on the same graph:

Again, the root vertex, which is “Bob” here, can just as well be any other vertex.

It's not necessary to always implement the graph from scratch in Java. There are several open source and mature libraries available that offer graph implementations.

In the next few subsections, we'll go through some of these libraries.

JGraphT is one of the most popular libraries in Java for the graph data structure. It allows the creation of a simple graph, directed graph and weighted graph, among others.

Additionally, it offers many possible algorithms on the graph data structure. One of our previous tutorials covers JGraphT in much more detail.

Google Guava is a set of Java libraries that offer a range of functions including graph data structure and its algorithms.

It supports creating simple Graph, ValueGraph and Network. These can be defined as Mutable or Immutable.

Apache Commons is an Apache project that offers reusable Java components. This includes Commons Graph that offers a toolkit to create and manage graph data structure. This also provides common graph algorithms to operate on the data structure.

Java Universal Network/Graph (JUNG) is a Java framework that provides extensible language for modeling, analysis and visualization of any data that can be represented as a graph.

JUNG supports many algorithms that include routines such as clustering, decomposition and optimization.

These libraries provide a number of implementations based on the graph data structure. There are also more powerful frameworks based on graphs, such as Apache Giraph, currently used at Facebook to analyze the graphs formed by their users, and Apache TinkerPop, commonly used on top of graph databases.

In this article, we discussed the graph as a data structure along with its representations. We defined a very simple graph in Java using Java Collections and also defined common traversals for the graph.

We also talked briefly about various libraries available in Java outside the Java platform that provide graph implementations.