In this tutorial, we’ll study the differences between directed and undirected graphs. We’ll also learn what are the cases in which we should prefer using one over the other.

At first, we’ll discuss the relationship between graphs and network theory, on one hand, and graphs and information theory, on the other. In doing so, we’ll learn a definition of entropy for graphs that allows us to compare directed with undirected graphs.

Programmers talk frequently about networks, but they get often confused when the discussion shifts to graphs. Graphs, in common sense, are the figurative representations of functions.

Let’s imagine we have a network comprised of a set of nodes linked, or not linked, by a given relationship 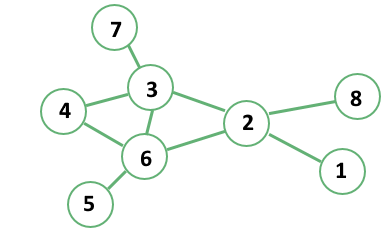 Internet or LANs can be modeled as networks, where each element is a computer and each link is a connection. This network can be considered as a system whose elements interact with one another, and give rise to a behavior that is emergent and often not reducible to the aggregate behavior of its components.

Networks of interrelated elements can be found in nature, in social systems, and in informatics, and are the subject of study of a discipline called network theory.

In graph theory, the mathematical counterpart of network theory, a network is called a graph, its nodes are called vertices, and the set of links are called edges. For the rest of this article, we’ll be using the terminology of graph theory, but keep in mind that this corresponds perfectly to the one associated with network theory:

Graphs are important data structures in computer science because they allow us to work not only with the values of objects but also with the relationships existing between them. Some typical applications of graphs in computer science involve knowledge representation, symbolic reasoning, multi-agent simulations, and modeling of dynamical systems.

Graphs are also important because they are well studied under an information-theoretic perspective. For this article, since we’re discussing the difference between directed and undirected graphs, we’re interested in the measurement of one important characteristic of graphs: their entropy.

As we’ll see, we can’t treat directed and undirected graphs as if they were equal, without paying a price in terms of entropy.

of a graph is a matrix where all row and columns represent the set of vertices belonging to that graph.

In the adjacency matrix, all rows indicate a tail or a start of a potential edge, while the columns indicate the head or target of that edge:

The cells in an adjacency matrix can have a value of 1 or 0 according to whether an edge exists or not between two vertices, respectively.

If the underlying graph has

elements, the associated adjacency matrix will have

elements. If we define an adjacency matrix in this manner, we can then compute on it a measurement of entropy by using Shannon’s formula for randomly-distributed binary variables:

To do so we need to first convert the adjacency matrix

to a random variable. We can do this by flattening the adjacency matrix. Flattening means assigning to each element

a unique position in a randomly-distributed variable

We can then insert this variable into the formula indicated above, and thus calculate a unique value of entropy for a given graph:

The concept of entropy in a graph is important. It’s in fact the primary reason why we can’t treat directed graphs as undirected graphs, as we’ll see shortly.

Directed graphs are a class of graphs that don’t presume symmetry or reciprocity in the edges established between vertices. In a directed graph, if

are two vertices connected by an edge

, this doesn’t necessarily mean that an edge connecting

Directed edges are normally represented as arrows pointing away from the origin vertex, or tail of the arrow, and towards a destination vertex, or head of the arrow. Directed graphs are the most general kind of graphs because they don’t impose the restrictive assumption of symmetry in the relationship modeled by the edges.

This type of graph is also typical for the modeling of certain kinds of real-world structures. The most common directed graph is probably the genealogical or phylogenetic tree, which maps the relationship between offsprings and their parents.

In a family tree, each vertex can at the same time be a parent and an offspring in different relationships, but not simultaneously in the same one:

It wouldn’t make sense for an individual to simultaneously be the parent and the child of another individual. As a consequence, the graph which represents family trees must necessarily be a directed graph.

Undirected graphs are more specific. For them, there’s an extra assumption regarding the reciprocity in the relationship between pairs of vertices connected by an edge. If an edge 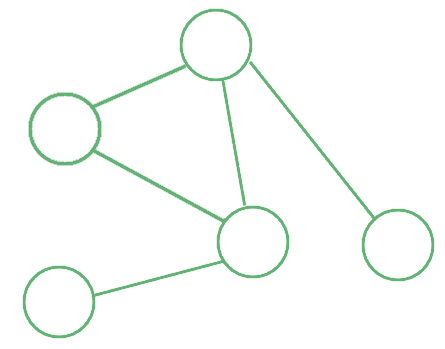 Undirected graphs are, in a sense, more restrictive than directed graphs, because they don’t allow the modeling of relationships that have a hierarchical nature. They’re however very common in practice, and many real-world relationships are best modeled by undirected graphs. This is normally the case if both vertices of an edge can be the subjects of that relationship.

One of the most popular undirected graphs in computer science is the topology of connections in a computer network. The graph is undirected because we can assume that if one device is connected to another, then the second one is also connected to the first: 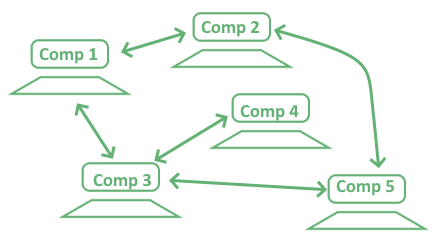 Other popular examples of undirected graphs include the topology of digital social networks, where each friend of someone is that someone’s friend; but also pedestrian pathways, where movement between any two intersections of paths is possible in both directions.

If we use this definition, we can then find the single undirected graph that corresponds to any given directed graph. This is important because it then allows us to compare the two classes of graphs in information-theoretic terms.

Note that the opposite is not necessarily the truth, in the sense that more than one directed graph can correspond to the same undirected graph: 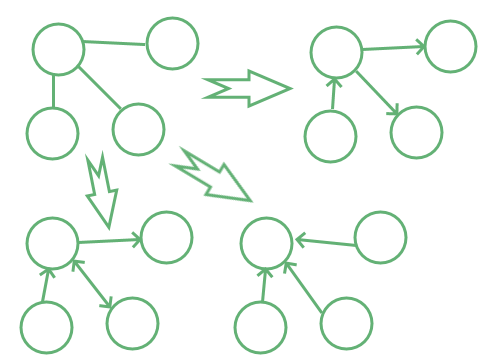 In our definition, two adjacency matrices

, and also if for all

If the two matrices satisfy this condition, we can then use Shannon’s measure of entropy to compare the two graphs.

5. The Entropy of Directed vs Undirected Graphs

5.1. Under What Conditions Can We Compare Them?

The condition defined above and which we follow for this section is very restrictive. It implies that the two graphs we’re comparing, the directed and undirected graph, include the same vertices.

This condition is a bit restrictive but it allows us to compare the entropy of the two graphs in general terms. We can do this in the following manner.

5.2. A Comparison of Entropy in Directed and Undirected Graphs

is the number of directed edges in the directed graph

has a number of edges that varies between

, if no two edges of

the random binary variable associated with the adjacency matrix

of the directed graph; and

the random binary variable associated with the adjacency matrix

exist out of the total possible

has no opposite edges, though,

We can consider these two cases as the extremes in a distribution of possible graph structures. Let’s now see how the two measures of entropy compare for a reference graph with 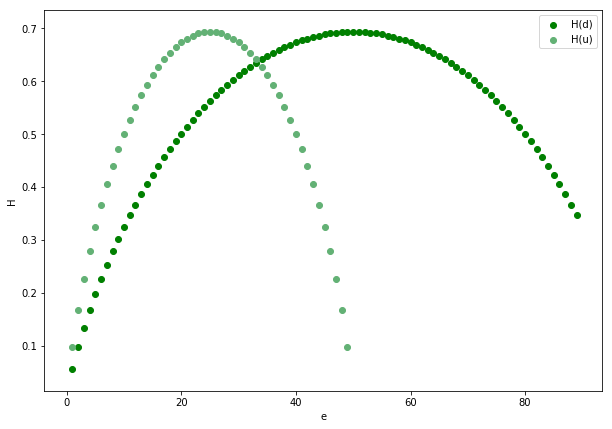 The figure above shows that, with the exception of

. This means that we can’t, as a general rule, treat directed graphs as undirected graphs or vice-versa. If we do, we normally pay a price in terms of their information content.

6. When to Choose One Over the Other

We can finally sum up what we learned about directed and undirected graphs. Here are some indications on how to choose which type to use:

Directed and undirected graphs are, by themselves, mathematical abstractions over real-world phenomena. As a consequence, a programmer should choose carefully which one to apply to a problem. The graph needs to correspond to the type of relationships which we model: undirected if it’s reciprocal, directed otherwise.

Undirected graphs are more restrictive kinds of graphs. They represent only whether or not a relationship exists between two vertices. They don’t however represent a distinction between subject and object in that relationship.

One type of graph can sometimes be used to approximate the other. When we do, though, there’s often a cost to pay in terms of information content.