In this tutorial, we're going to learn about the Breadth-First Search algorithm, which allows us to search for a node in a tree or a graph by traveling through their nodes breadth-first rather than depth-first.

First, we'll go through a bit of theory about this algorithm for trees and graphs. After that, we'll dive into the implementations of the algorithms in Java. Finally, we'll cover their time complexity.

The basic approach of the Breadth-First Search (BFS) algorithm is to search for a node into a tree or graph structure by exploring neighbors before children.

First, we'll see how this algorithm works for trees. After that, we'll adapt it to graphs, which have the specific constraint of sometimes containing cycles. Finally, we'll discuss the performance of this algorithm.

The idea behind the BFS algorithm for trees is to maintain a queue of nodes that will ensure the order of traversal. At the beginning of the algorithm, the queue contains only the root node. We'll repeat these steps as long as the queue still contains one or more nodes:

Execution termination is ensured by the absence of cycles. We'll see how to manage cycles in the next section.

In the case of graphs, we must think of possible cycles in the structure. If we simply apply the previous algorithm on a graph with a cycle, it'll loop forever. Therefore, we'll need to keep a collection of the visited nodes and ensure we don't visit them twice:

Now that the theory has been covered, let's get our hands into the code and implement these algorithms in Java!

First, we'll implement the tree algorithm. Let's design our Tree class, which consists of a value and children represented by a list of other Trees:

To avoid creating cycles, children are created by the class itself, based on a given value.

After that, let's provide a search() method:

As we mentioned earlier, the BFS algorithm uses a queue to traverse the nodes. First of all, we add our root node to this queue:

Then, we've got to loop while the queue is not empty, and each time we pop out a node from the queue:

If that node is the one we're searching for, we return it, else we add its children to the queue:

Finally, if we visited all the nodes without finding the one we're searching for, we return an empty result: 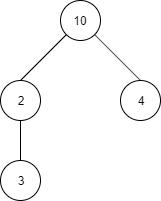 Which translates into the Java code:

Then, if searching for the value 4, we expect the algorithm to traverse nodes with values 10, 2 and 4, in that order:

We can verify that with logging the value of the visited nodes:

That concludes the case of trees. Let's now see how to deal with graphs. Contrarily to trees, graphs can contain cycles. That means, as we've seen in the previous section, we have to remember the nodes we visited to avoid an infinite loop. We'll see in a moment how to update the algorithm to consider this problem, but first, let's define our graph structure:

Now, we can see that, in opposition to trees, we can freely connect a node with another one, giving us the possibility to create cycles. The only exception is that a node can't connect to itself.

It's also worth noting that with this representation, there is no root node. This is not a problem, as we also made the connections between nodes bidirectional. That means we'll be able to search through the graph starting at any node.

First of all, let's reuse the algorithm from above, adapted to the new structure:

We can't run the algorithm like this, or any cycle will make it run forever. So, we must add instructions to take care of the already visited nodes:

As we can see, we first initialize a Set that'll contain the visited nodes.

Then, when the comparison of values fails, we add the node to the visited ones:

Finally, after adding the node's neighbors to the queue, we remove from it the already visited nodes (which is an alternative way of checking the current node's presence in that set):

By doing this, we make sure that the algorithm won't fall into an infinite loop.

Let's see how it works through an example. First of all, we'll define a graph, with a cycle: 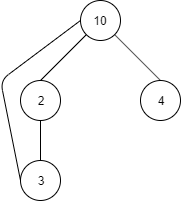 And the same in Java code:

Let's again say we want to search for the value 4. As there is no root node, we can begin the search with any node we want, and we'll choose firstNeighborNeighbor:

Now that we've covered both algorithms in Java, let's talk about their time complexity. We'll use the Big-O notation to express them.

Let's start with the tree algorithm. It adds a node to the queue at most once, therefore visiting it at most once also. Thus, if n is the number of nodes in the tree, the time complexity of the algorithm will be O(n).

Now, for the graph algorithm, things are a little bit more complicated. We'll go through each node at most once, but to do so we'll make use of operations having linear-complexity such as addAll() and removeAll().

In this article, we learned about the Breadth-First Search algorithm and how to implement it in Java.

After going through a bit of theory, we saw Java implementations of the algorithm and discussed its complexity.

As usual, the code is available over on GitHub.