In this tutorial, we’ll focus on two problems: Minimal Spanning Tree and Shortest Path Tree. We can solve both problems with greedy algorithms that have a similar structure.

A spanning tree of an undirected graph G is a connected subgraph that covers all the graph nodes with the minimum possible number of edges. In general, a graph may have more than one spanning tree. 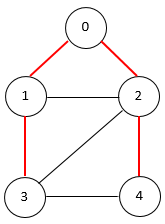 The following figure shows a minimum spanning tree on an edge-weighted graph: 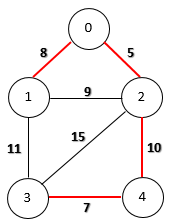 We can solve this problem with several algorithms including Prim’s, Kruskal’s, and Boruvka’s. Let’s introduce Prim’s algorithm since it has a similar structure with the solution to the shortest path tree problem:

The time complexity of Prim’s algorithm depends on the data structures used for the graph.

For example, if we use the adjacency list to represent a graph and store the edges in a priority queue, the overall time complexity is O(E log V), where V is the number of nodes in the graph and E is the number of edges. Also, the overall time complexity is O(V2), if we use the adjacency matrix to represent a graph.

In the shortest path tree problem, we start with a source node s.

We can solve this problem with Dijkstra’s algorithm:

Dijkstra’s algorithm has a similar structure to Prim’s algorithm. However, they have different selection criteria.

In this tutorial, we discussed two similar problems: Minimum Spanning Tree and Shortest-Path Tree. Also, we compared the difference between Prim’s and Dijkstra’s algorithms.

Detailed implementations are available in our articles about Prim’s and Dijkstra’s algorithms, respectively.