In this tutorial, we explore maximum likelihood estimation through an example. We take care to introduce likelihood as distinct from probability. We go on to show what estimating the maximum likelihood of a dataset means. Then, we discuss how it can be used as the basis for optimizing many types of models.

2. What is the Maximum Likelihood?

In other words, the maximum likelihood estimate of a parameter is the value that is most likely to have produced the observed data, assuming that the model is correct. This method estimates the parameters of various statistical models, including regression models, logistic models, and many others.

2.1. A Comparison to Probability

It is helpful here to clarify the difference between likelihood and probability. Probability tells us the chance that some piece of data was observed given a model. The likelihood, by contrast, tells us the chance some model generated the given data. Here we use the term chance loosely to convey the intuition, and further, we show the corresponding formula.

Probability is a function of the observations parameterized by the function’s parameters. If this model describes the data, how probable is a specific example:

The likelihood is a function of the parameters of the chosen distribution, parameterized by the observations:

Now that we have an intuition for probability and likelihood, we start putting the concepts together. Since the likelihood is the probability a specific parameterization leads to observing the data, we can equate our two formulas:

We’ll now walk through the steps to create an optimization problem. First, let’s rewrite the equation above.

In reality, it is often easier to maximize the log of the above equation. Alternatively, we can minimize the negative log-likelihood. This is a common approach in machine learning. In either case, we take the log of the probability density function:

We then bring the log inside the product and, consequently, convert it to a sum.

By inverting the sign and making the result negative, we can also create a minimization problem where we minimize the negative log-likelihood. This is standard and would allow us to apply SciPy’s minimize function or even neural networks to solve the problem.

It is also worth noting that maximum likelihood estimation is related to other optimization techniques. In particular, if we assume a normal distribution, then it is equivalent to the ordinary least squares method.

For example, we want to represent the distribution of mouse weights from a given dataset containing the measured weight of a set of mice. The weights of the mice are shown in the plot. Maximum likelihood estimation is a method of optimizing the parameters of a model. In order to use it, we need to choose a model: 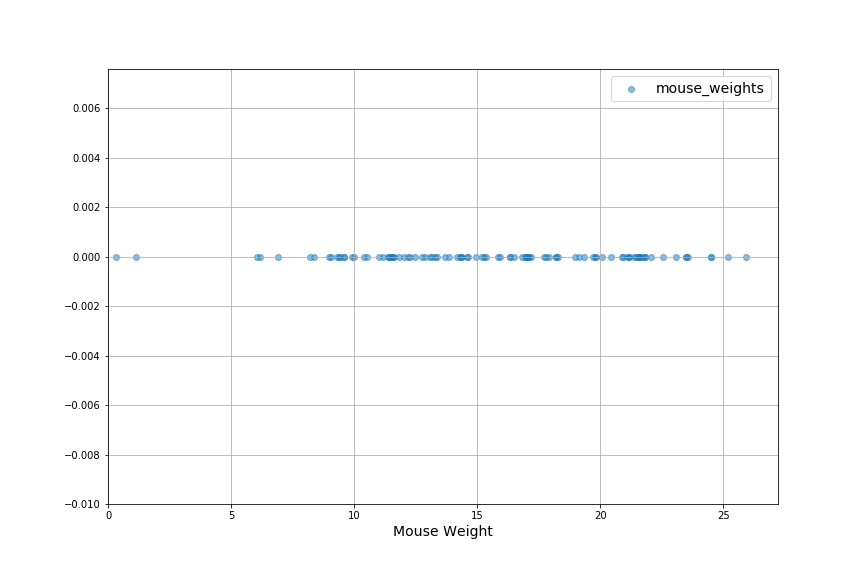 Looking at the plot of mouse weights, we could say our data looks normally distributed. The data seems to appear bunched together towards the middle and then becomes less dense towards the edges. Many real-life examples fit this distribution.

We define the Gaussian (normal) distribution by two parameters. The mean

. We use maximum likelihood to fit these two parameters of our distribution/model.

We see three examples of differently parameterized Gaussian distributions in the graph below. We use the maximum likelihood estimate to choose which is best. An optimization method is used if better results are required. This allows us to find even better parameters for the distribution: 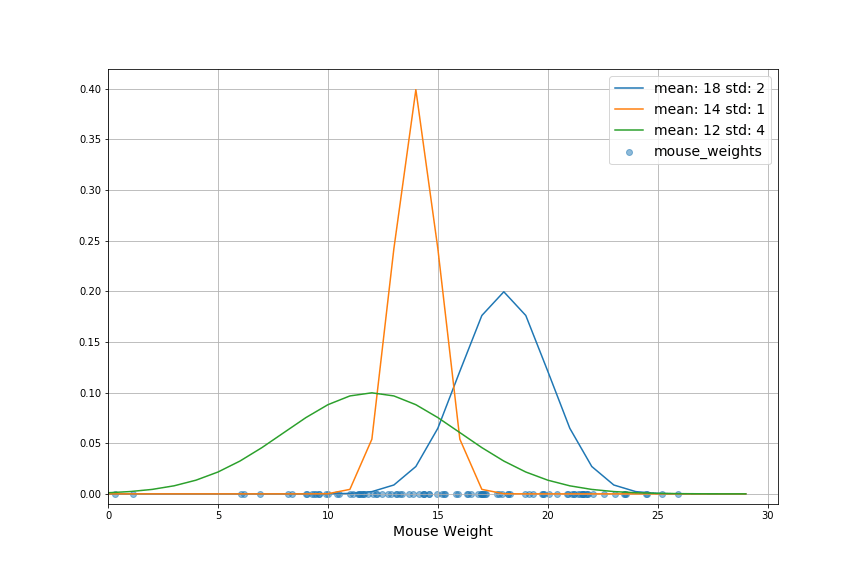 In this case, the mean and standard deviation of the data produce the best-fitting Gaussian. The method generalizes beyond the Gaussian distribution to other distributions and models.

4. Where is the Maximum Likelihood Used?

We use maximum likelihood estimation in a wide variety of applications, including the following:

As is the case for all estimation methods, there are several limitations to consider when using maximum likelihood estimation.

In our examples, the equations that allow us to select the parameters that optimize our chosen model need to be explicitly worked out.

In this tutorial, we introduced maximum likelihood estimation. We highlighted the difference between likelihood and probability. We went on to describe how the concepts can be related in order to create an optimization problem.