Let’s suppose that we are given a set of measured data points. Curve fitting is the process of finding a mathematical function in an analytic form that best fits this set of data. The first question that may arise is why do we need that. There are many cases that curve fitting can prove useful:

Generally, curve fitting falls into two main categories based on how we handle the observed data: 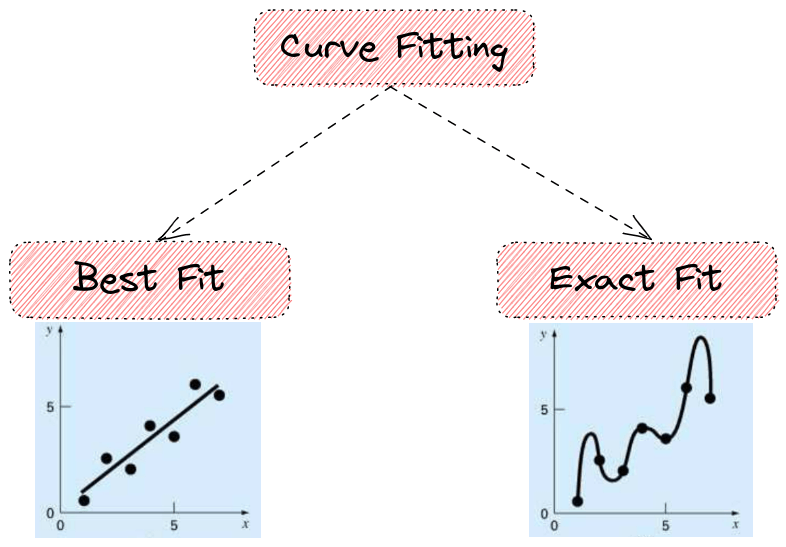 Here, we assume that the measured data points are noisy. So, we don’t want to fit a curve that intercepts every data point. Our goal is to learn a function that minimizes some predefined error on the given data points.

The simplest best fit method is linear regression, where the curve is a straight line. More formally, we have the parametric function

is the slope and

is the intercept and a set of samples

. Our goal is to learn the values of

to minimize an error criterion on the given samples.

More generally, polynomial regression refers to the case that we want to fit a polynomial of a specific order

In the functions above, we can observe that each time the parameters we want to learn are equal to

. Below, we can see some examples of curve fitting using different functions:

Also, we can fit any other function to our data like:

In this case, we assume that the given samples are not noisy, and we want to learn a curve that passes through each point. It is useful in cases we want to derive finite-difference approximations or to find minimums, maximums, and zero crossings of a function.

In the figure below, we can see an example of an exact fit using polynomial interpolation. 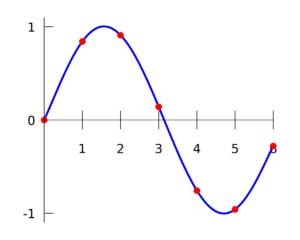 There are many proposed algorithms for curve fitting. The most well-known method is least squares, where we search for a curve such that the sum of squares of the residuals is minimum. By saying residual, we refer to the difference between the observed sample and the estimation from the fitted curve. It can be used both for linear and non-linear relationships.

In the linear case when

, the function we want to fit is

. So, we want to find the parameters

so as to minimize

In order to minimize the above term there are two conditions:

In non-linear least-squares problems, a very famous algorithm is the Gauss-Newton method. While we don’t have theoretical proof that the algorithm converges, it finds a proper solution in practice and is easy to implement.

Here we’ll see an example of fitting a straight line in a set of samples using the least-squares method. Let’s suppose we have the following data:

In the graph below, we can see the data in a scatter plot: 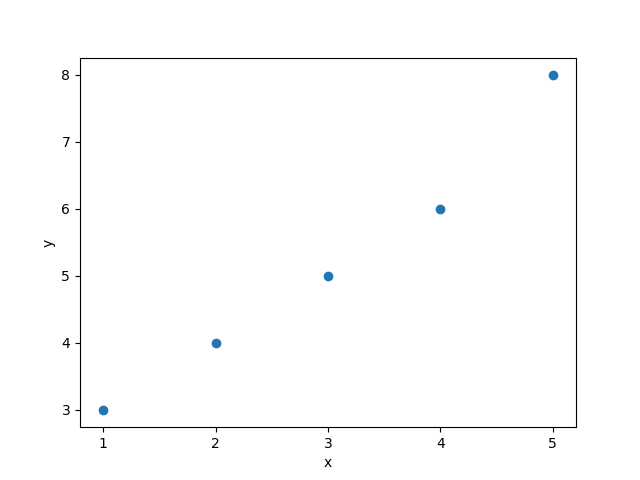 We want to fit the linear function

. If we replace our data in the equations we derived in the previous section we have the following results:

We solve the above system of two equations and two variables, and we find that

. So, we have the function 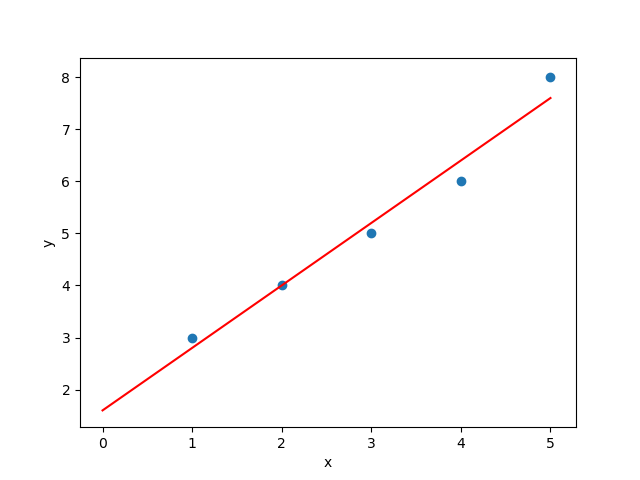 In the graph above, the red line corresponds to the fitted curve on the input data (blue dots). As we expected, the fitted line is the one that has the minimum distance from the input points.

In this tutorial, we talked about curve fitting. First, we made an introduction to the basic terminology and the categories of curve fitting. Then, we presented the least-squares algorithm both theoretically and through an example.