By the end, we’ll understand the rationale behind their insertion into a CNN. Additionally, we’ll also know what steps are required to implement them in our own convolutional neural networks.

2. The Curse of Dimensionality in CNNs

There are two underlying hypotheses that we must assume when building any neural network:

1 – Linear independence of the input features

2 – Low dimensionality of the input space

The data we typically process with CNNs (audio, image, text, and video) doesn’t usually satisfy either of these hypotheses, and this is exactly why we use CNNs instead of other NN architectures.

In a CNN, by performing convolution and pooling during training, neurons of the hidden layers learn possible abstract representations over their input, which typically decrease its dimensionality.

A CNN thus helps solve the so-called “Curse of Dimensionality” problem, which refers to the exponential increase in the amount of computation required to perform a machine-learning task in relation to the unitary increase in the dimensionality of the input.

3.1. Why Not Using Sigmoidal Functions in CNNs?

For any given neuron in the hidden layer, representing a given learned abstract representation, there are two possible (fuzzy) cases: either that neuron is relevant, or it isn’t.

If the neuron isn’t relevant, this doesn’t necessarily mean that other possible abstract representations are also less likely as a consequence. If we used an activation function whose image includes

, this means that, for certain values of the input to a neuron, that neuron’s output would negatively contribute to the output of the neural network.

This is generally undesirable: as mentioned above, we assume that all learned abstract representations are independent of one another. For CNNs, it’s therefore preferable to use non-negative activation functions. 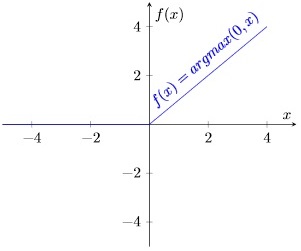 This function has two major advantages over sigmoidal functions such as

The latter, in particular, has important implications for backpropagation during training. It means in fact that calculating the gradient of a neuron is computationally inexpensive:

Non-linear activation functions such as the sigmoidal functions, on the contrary, don’t generally have this characteristic.

As a consequence, the usage of ReLU helps to prevent the exponential growth in the computation required to operate the neural network. If the CNN scales in size, the computational cost of adding extra ReLUs increases linearly.

ReLUs also prevent the emergence of the so-called “vanishing gradient” problem, which is common when using sigmoidal functions. This problem refers to the tendency for the gradient of a neuron to approach zero for high values of the input.

While sigmoidal functions have derivatives that tend to 0 as they approach positive infinity, ReLU always remains at a constant 1. This allows backpropagation of the error and learning to continue, even for high values of the input to the activation function: 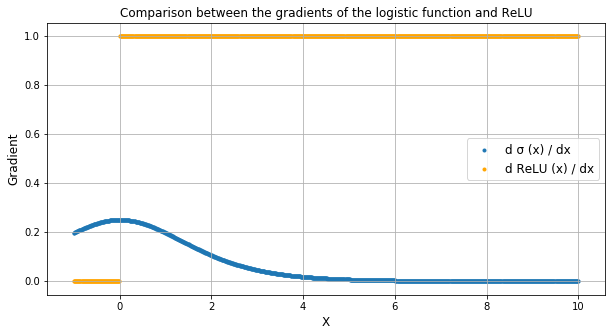 Dropout layers are important in training CNNs because they prevent overfitting on the training data. If they aren’t present, the first batch of training samples influences the learning in a disproportionately high manner. This, in turn, would prevent the learning of features that appear only in later samples or batches:

Say we show ten pictures of a circle, in succession, to a CNN during training. The CNN won’t learn that straight lines exist; as a consequence, it’ll be pretty confused if we later show it a picture of a square. We can prevent these cases by adding Dropout layers to the network’s architecture, in order to prevent overfitting.

5. A CNN With ReLU and a Dropout Layer

This flowchart shows a typical architecture for a CNN with a ReLU and a Dropout layer. This type of architecture is very common for image classification tasks:

In this article, we’ve seen when do we prefer CNNs over NNs. We prefer to use them when the features of the input aren’t independent. We have also seen why we use ReLU as an activation function.

ReLU is simple to compute and has a predictable gradient for the backpropagation of the error.

Finally, we discussed how the Dropout layer prevents overfitting the model during training. Notably, Dropout randomly deactivates some neurons of a layer, thus nullifying their contribution to the output.