In this tutorial, we’ll explain the role of kernels in machine learning intuitively.

The so-called kernel trick enables us to apply linear models to non-linear data, which is the reason it has gained popularity in science and industry. In addition to classification, which is the task we usually associate them with, kernels can help us solve other problems in the field, such as regression, clustering, and dimensionality reduction..

Linear models are appealing for several reasons. First, the optimization problems we solve while training them have straightforward analytical solutions. Second, many would argue that linear models are inherently interpretable, so the users can understand how they work and the meaning of their components. They’re also easy to communicate and visualize. And, last but not least, they admit for a relatively simple mathematical analysis. For instance, such are Support Vector Machines, Linear Regression, and Principal Components Analysis.

However, linear models like those break down in the presence of non-linear relationships in the data. Let’s illustrate that with an example.

It’s easy to fit a straight line to reasonably linear data to find a linear boundary between linearly separable classes: 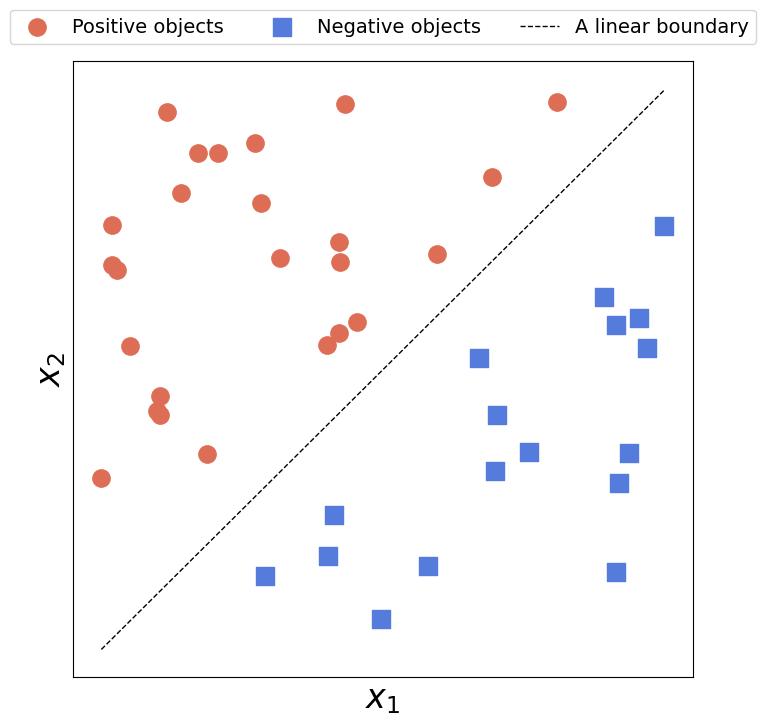 Unfortunately, no straight line can capture a circular boundary: 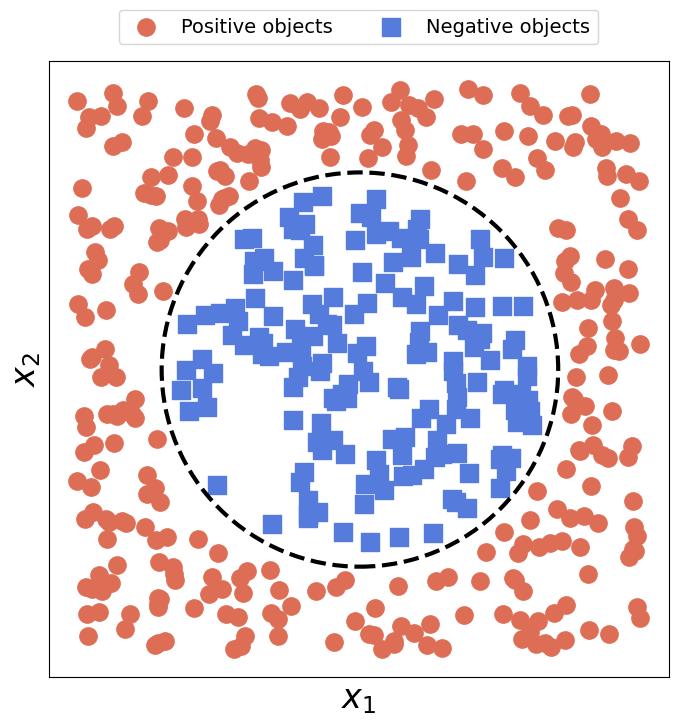 As a rule, the more complex and pronounced the non-linear relationships in the data are, the poorer the linear model’s performance. Still, we’d like to have models that keep the favorable properties of the linear ones but can handle arbitrarily complex data.

Kernels allow us precisely that. The idea is to map the data from the original space to a new one where they will be linear. For example, applying the transformation

to the circular dataset, we get linearly separable data: 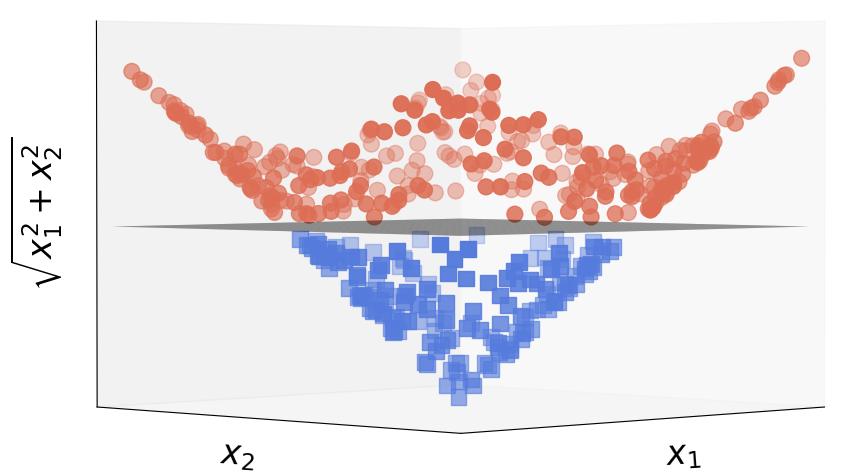 As we see, the circular boundary in the original space becomes a plane in the transformed one.

3. The Mathematics of Kernels

How do the kernels work? Well, we said that the idea was to find a mapping

which would transform every object

in a new space

where those images would be linear. For example, in classification problems, we seek the spaces in which the decision boundary between the classes is a linear function of the new features.

However, transforming the data could be a very costly operation. Typically, a training set containing

Depending on the complexity of

could take a lot of time to compute and memory to store. Further, if the space

in which the data become linear is infinitely dimensional, transforming a single object would never end, and the approach would fail.

Luckily for us, the kernel trick solves this issue.

The essential observation is that the solutions to the linear models’ optimization problems involve the term:

Its result is an

is the dot product of

. The dot product on its part is the inner product

In the target space

would contain the inner products of the images in

! By its definition, a kernel

So, the kernel trick allows us to fit a linear model in a target space

without transforming the data. Therefore, to solve a non-linear problem with a linear algorithm, we need the appropriate

However, how do we find the kernel and the target space

? The best advice is to look at the data. For instance, if we spot quadratic patterns, we should go with the quadratic function:

However, it’s not always easy to see which kernel is the best fit. In that case, we can try some popular choices like the Gaussian (RBF) kernel:

is the Euclidean norm.

We can determine any kernel parameter’s value with cross-validation.

Another way to look at kernels is to interpret them as similarity measures. To see why, let’s remember that kernels replace the Euclidean inner product, i.e., the dot product of vectors in

. If the vectors are orthogonal, the product is equal to zero, and we can see that the orthogonal vectors differ the most:

The less orthogonal, i.e., the more similar two vectors are, the greater their inner product. Since kernels compute the inner products in target feature spaces, they too have this property. So, a good kernel should reflect the similarity of the objects we compute it over.

This interpretation has a mathematical justification. All the kernels are positive semi-definite functions, which is in line with being a similarity measure. Zero is reserved for completely dissimilar objects, while positive values quantify various degrees of similarity.

We usually apply machine learning to tabular data, that is, the data in which each object is a vector with a precisely defined order of features. However, not all data are like that. For example, sets don’t come with an ordering. The same goes for structured data, graphs, and nodes in them.

as a kernel, we can fit linear models to the data whose objects are sets.

What’s the relationship between kernels and feature spaces? Each space

has a unique kernel

because the inner product is unique in every space endowed with it. The converse, however, doesn’t hold. Let’s take a look at the very simple 1D kernel:

It’s a special case of the Euclidean space in one dimension. The identity mapping

corresponds to the mapping

we associate with this kernel, so we could say that the original and the target spaces are the same. But, some other mappings and spaces also fit this kernel. For example:

which we can verify:

Therefore, every kernel can correspond to multiple feature spaces.

In this article, we gave an intuitive explanation of the kernel trick. As we saw, kernels allow us to efficiently fit linear models to non-linear data without explicitly transforming them to feature spaces where they are linear. Thus, they save us both time and space.

We can interpret kernels as the measures of similarity between the objects. Constructing them to quantify the similarity, we can apply them to any data type such as graphs or sets, not just vectors where the order of features matters and is fixed in advance.