In this tutorial, we’ll cover their definitions, similarities, and differences.

Let’s imagine that we have an English sentence like Math is the language of nature. We want to label each word with its part of speech. That way, we get a graph:

Let’s see what each color and arrow represent. The sentence is our observed data (shown in gray circles) and the labels are the hidden information we want to extract (shown in white circles). In addition, each word depends on its label and each label depends on the previous label.

This graph represents a first-order hidden Markov model which belongs to the family of Bayesian networks.  The reason why we call it “first-order” is that each hidden variable depends only on the previous one. We can extend it to a higher-order model by conditioning the hidden variables on more than one predecessor.

The general first-order HMM graph for any sequence is similar to that of our example:

We can assign probabilities to each arrow and model the occurrence of such a sequence using the product of these probabilities:

are the sequence and the array of its labels. The

are emission probabilities and the

Let’s imagine we want to tag the words in the sentence I love programming. From our training data, we can learn the emission and transition probabilities by counting. For instance, let’s imagine that the training data consists of three sentences: 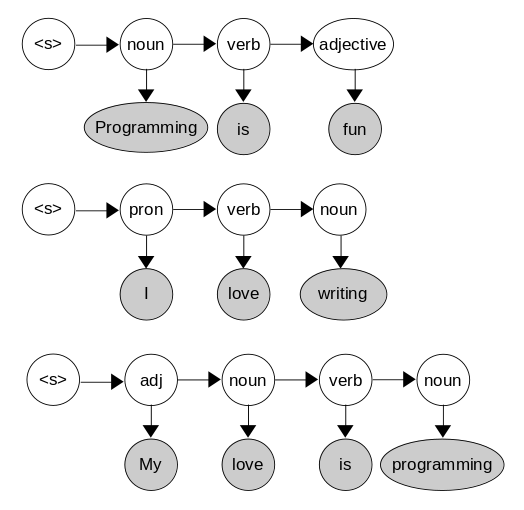 From there, we calculate the emission probabilities:

and the transition probabilites:

To find the optimal labels, we can go over all the combinations of states and observations to find the sequence that has the maximum probability. For our example, the best sequence is:

Given that our example was a small one with only a couple of words and parts of speech, it’s easy to enumerate all the possible combinations. However, this can become extremely difficult to do in more complex and longer sentences. For them, we use inference algorithms such as Viterbi or Forward-backward.

A CRF is a graphical models of

. This makes it a discriminative model since we only want to model the hidden variables conditioned on the observations. As a result, we do not care about their marginal distributions.

Here’s a schematic representation of a CRF:

For instance, for our previous example of POS tagging, one feature can be whether a word and its predecessor are of the same type. Another one could be whether the current word is the end of the sequence.

are our feature functions, with

being current label, previous label and current word, respectively. For each word or element of a sequence, a feature can be 0 or 1, depending on whether the word has the corresponding feature. Then, CRFs assign weights

to the feature functions based on the training data. As a result, we get a score of

for each word. To make this a probability distribution, we exponentiate and normalize it over all the possible feature functions. Then, multiplying the probabilities of each word, we get the final formula:

accounts for all the possible feature functions. It might be very difficult to compute as the number of these functions can explode. As a result, we resort to approximate estimation of

Let’s consider the same part-of-speech (POS) tagging problem from above. For a CRF model, we need to define some feature functions first. Then, using our training examples, we estimate the weight of each function for each word. We can come up with various functions. Here, we’ll consider the following ones:

Using the training data, we learn the weights of all the features for all the words. In practice, we use Gradient Descent to find the weights that maximize the sequence’s probability, i.e., minimize its log-likelihood.

We can use both models for the same tasks such as POS tagging. However, their approaches differ.

The training objective of HMMs is Maximum Likelihood Estimation (MLE) by counting. Therefore, they aim to maximize the probability of the observed data. Conversely, we train CRFs using a gradient-based method, which gives us a hyperplane that classifies new data.

For inference, both models use the same algorithm called the forward-backward algorithm.

HMMs are more constrained than CRFs since, in HMMs, each state depends on a fixed set of previous hidden states. This enables them to capture the local context. In contrast, CRFs can consider non-consecutive states as a feature function. That’s why they can capture both local and global contexts.

For example, the feature function for the first word in the sentence might inspect the relationship between the start and the end of a sequence, labeling the first word as a verb if the sequence ends with a question mark. That isn’t possible with HMMs. As a result, CRFs can be more accurate than HMMs if we define the right feature functions.

in a CRF doesn’t make

With that said, CRFs are computationally more challenging. The reason is that the normalization factor is intractable and its exact computation is impossible or hard to do.

Here are some of the main characteristics of HMMs and CRFs:

In this article, we compared Hidden Markov Models (HMMs) with Conditional Random Fields (CRFs). While the former are generative models, the latter are discriminative.