In this tutorial, we’ll discuss eavesdropping attacks with a practical example.

Furthermore, we’ll present the variants of eavesdropping attacks and some crucial prevention methods.

An eavesdropping attack, also known as a wiretapping or listening attack, is a popular cyber attack in networking. In this attack, an attacker intercepts and listens to communications between two parties without their knowledge or consent.

An eavesdropping attack can be performed by physically tapping into a communication line or wire. Additionally, the attackers can use specialized software or hardware to intercept as well as decode wireless communication.

Eavesdropping attacks are a big threat to the integrity and confidentiality of the data. It allows an attacker to gather sensitive information, such as login credentials, financial data, or personal conversations, without the victim’s knowledge. Furthermore, attackers can use the extracted information for various malicious purposes, such as identity theft, extortion, or espionage.

Let’s look at the general steps in order to launch an eavesdropping attack: 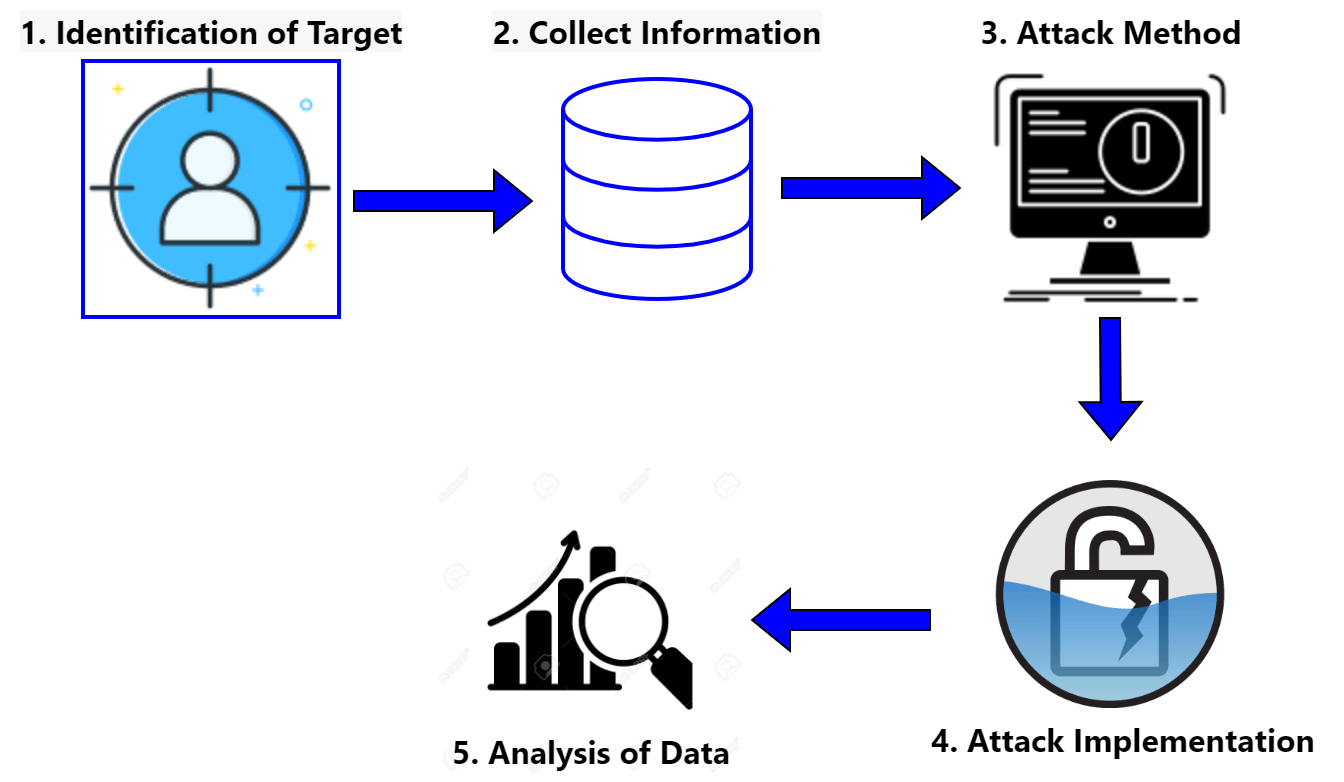 The first step is identifying a target for the attack, such as a specific individual or organization. As soon as the attacker identifies the target, it starts gathering information about it. Some useful information the attacker wants to extract includes the communication systems and vulnerabilities that can be exploited.

The next step is to choose an appropriate method for the successful execution of the attack. There’re several different methods that an attacker can use. Some examples are intercepting communication over unsecured networks, using malware to gain access to a device, or using hardware devices.

The next step is to execute the chosen method in the target system and intercept the target’s communication. Finally, the attacker analyzes the intercepted communication and extracts valuable information. They might also exfiltrate or remove data for further analysis.

In a man-in-the-middle attack, an attacker intercepts communication between two parties. It acts as a relay, forwarding messages between the parties while secretly intercepting and reading them. MITM attacks can have severe consequences for both parties involved. For example, an attacker could intercept and alter financial transactions, leading to financial loss for one or both parties.

We can always find some unencrypted public Wi-Fi networks. Unencrypted networks make it easy for attackers to intercept and listen to communication. These attacks can be particularly dangerous for people who use public Wi-Fi to conduct sensitive transactions, such as online banking or shopping.

Finally, attackers can design malware to intercept and transmit sensitive information, such as login credentials or financial data. The malware is typically delivered to the target through a phishing email or a malicious website. Malware-based eavesdropping attacks can be challenging to detect and prevent. These types of malware are often designed to operate in the background without the victim’s knowledge.

Let’s talk about some practical examples of eavesdropping attacks.

The first example explores a man-in-the-middle attack. Suppose Alice and Bob are communicating over an unsecured network. An attacker named Sam wants to intercept their communication. Sam can set up a fake wireless access point and trick Alice and Bob into connecting to it. 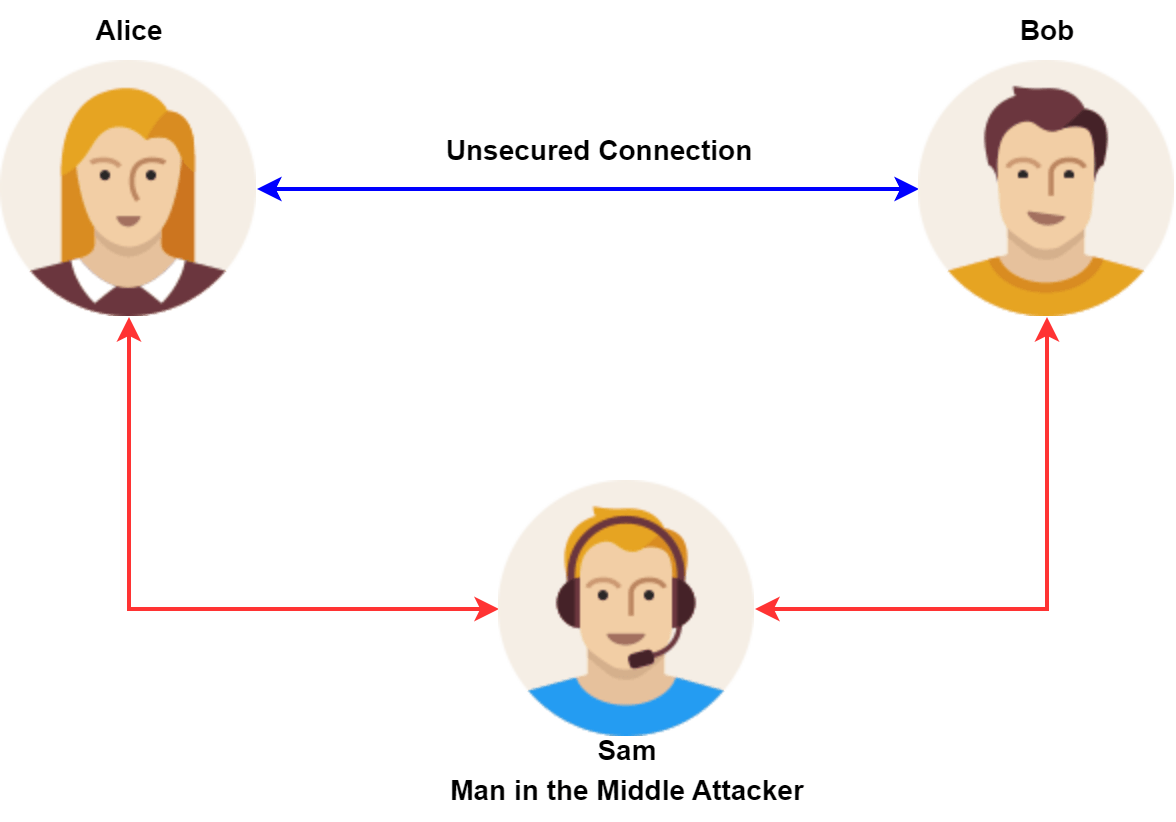 Let’s consider another scenario where two individuals, Alice and Bob, communicate with each other over a public Wi-Fi network at a coffee shop. An attacker, Sam, is also connected to the same Wi-Fi network. Additionally, he can use software tools to intercept and read the data exchanged between Alice and Bob.

Sam can use various techniques, such as packet sniffing or man-in-the-middle attacks, to gain access to their communications. Additionally, Sam can access sensitive information such as login credentials, credit card information, and other sensitive data.

Eavesdropping attacks can have significant impacts on a network. Additionally, individuals and organizations relying on the network may face implications. An eavesdropping attack’s potential effects include loss of sensitive information, damage to reputation, loss of trust, financial losses, and legal consequences.

If an eavesdropping attack is discovered, it can cause a loss of trust in the affected individuals or organizations. Additionally, it can result in financial losses, such as the cost of repairing damage or restoring lost data or the loss of business due to a damaged reputation.

Finally, an eavesdropping attack may violate laws or regulations, such as privacy laws or data protection regulations. It can result in legal and regulatory consequences for the affected individuals or organizations.

Virtual private networks (VPNs) create a secure, encrypted connection between a device and a remote server. They can help to prevent eavesdropping attacks by encrypting communication and making it difficult for attackers to intercept.

Several secure communication protocols can be used to prevent eavesdropping attacks, such as HTTPS, SFTP, and SSH. These protocols use encryption and other security measures to protect communication from being intercepted. Firewalls can also prevent unauthorized access to communication lines or devices. By using a set of rules,  it controls incoming and outgoing network traffic.

On top of all the techniques, educating employees and users about the risks of eavesdropping attacks and the importance of using secure communication methods can help prevent these attacks.

In this tutorial, we discussed eavesdropping attacks with a practical example.

Furthermore, we presented the variants of eavesdropping attacks and some prevention methods.