One of the core benefits of Java is the automated memory management with the help of the built-in Garbage Collector (or GC for short). The GC implicitly takes care of allocating and freeing up memory and thus is capable of handling the majority of the memory leak issues.

While the GC effectively handles a good portion of memory, it doesn't guarantee a foolproof solution to memory leaking. The GC is pretty smart, but not flawless. Memory leaks can still sneak up even in applications of a conscientious developer.

There still might be situations where the application generates a substantial number of superfluous objects, thus depleting crucial memory resources, sometimes resulting in the whole application's failure.

Memory leaks are a genuine problem in Java. In this tutorial, we'll see what the potential causes of memory leaks are, how to recognize them at runtime, and how to deal with them in our application.

2. What Is a Memory Leak

A Memory Leak is a situation when there are objects present in the heap that are no longer used, but the garbage collector is unable to remove them from memory and, thus they are unnecessarily maintained.

A memory leak is bad because it blocks memory resources and degrades system performance over time. And if not dealt with, the application will eventually exhaust its resources, finally terminating with a fatal java.lang.OutOfMemoryError.

The garbage collector removes unreferenced objects periodically, but it never collects the objects that are still being referenced. This is where memory leaks can occur: 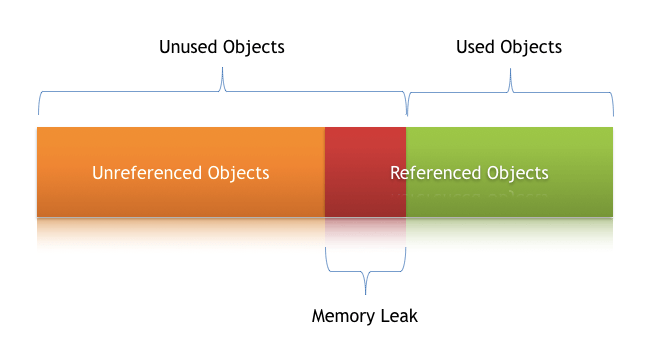 Symptoms of a Memory Leak

Let's have a closer look at some of these scenarios and how to deal with them.

3. Types of Memory Leaks in Java

In any application, memory leaks can occur for numerous reasons. In this section, we'll discuss the most common ones.

The first scenario that can cause a potential memory leak is heavy use of static variables.

In Java, static fields have a life that usually matches the entire lifetime of the running application (unless ClassLoader becomes eligible for garbage collection).

Now if we analyze the Heap memory during this program execution, then we'll see that between debug points 1 and 2, as expected, the heap memory increased.

But when we leave the populateList() method at the debug point 3, the heap memory isn't yet garbage collected as we can see in this VisualVM response:

However, in the above program, in line number 2, if we just drop the keyword static, then it will bring a drastic change to the memory usage, this Visual VM response shows:

The first part until the debug point is almost the same as what we obtained in the case of static. But this time after we leave the populateList() method, all the memory of the list is garbage collected because we don't have any reference to it.

Hence we need to pay very close attention to our usage of static variables. If collections or large objects are declared as static, then they remain in the memory throughout the lifetime of the application, thus blocking the vital memory that could otherwise be used elsewhere.

Whenever we make a new connection or open a stream, the JVM allocates memory for these resources. A few examples include database connections, input streams, and session objects.

In either case, the open connection left from resources consumes memory, and if we don't deal with them, they can deteriorate performance and may even result in OutOfMemoryError.

When defining new classes, a very common oversight is not writing proper overridden methods for equals() and hashCode() methods.

HashSet and HashMap use these methods in many operations, and if they're not overridden correctly, then they can become a source for potential memory leak problems.

Let's take an example of a trivial Person class and use it as a key in a HashMap:

Now we'll insert duplicate Person objects into a Map that uses this key.

But since we haven't defined proper equals() method, the duplicate objects pile up and increase the memory, that's why we see more than one object in the memory. The Heap Memory in VisualVM for this looks like:

However, if we had overridden the equals() and hashCode() methods properly, then there would only exist one Person object in this Map.

Let's take a look at proper implementations of equals() and hashCode() for our Person class:

And in this case, the following assertions would be true:

After properly overriding equals() and hashCode(), the Heap Memory for the same program looks like:

Another example is of using an ORM tool like Hibernate, which uses equals() and hashCode() methods to analyze the objects and saves them in the cache.

The chances of memory leak are quite high if these methods are not overridden because Hibernate then wouldn't be able to compare objects and would fill its cache with duplicate objects.

For more information, visit our tutorials Generate equals() and hashCode() with Eclipse and Guide to hashCode() in Java.

This happens in the case of non-static inner classes (anonymous classes). For initialization, these inner classes always require an instance of the enclosing class.

Consider a class that holds the reference to lots of bulky objects and has a non-static inner class. Now when we create an object of just the inner class, the memory model looks like:

However, if we just declare the inner class as static, then the same memory model looks like this:

This happens because the inner class object implicitly holds a reference to the outer class object, thereby making it an invalid candidate for garbage collection. The same happens in the case of anonymous classes.

Use of finalizers is yet another source of potential memory leak issues. Whenever a class' finalize() method is overridden, then objects of that class aren't instantly garbage collected. Instead, the GC queues them for finalization, which occurs at a later point in time.

Additionally, if the code written in finalize() method is not optimal and if the finalizer queue cannot keep up with the Java garbage collector, then sooner or later, our application is destined to meet an OutOfMemoryError.

To demonstrate this, let's consider that we have a class for which we have overridden the finalize() method and that the method takes a little bit of time to execute. When a large number of objects of this class gets garbage collected, then in VisualVM, it looks like:

However, if we just remove the overridden finalize() method, then the same program gives the following response:

For more detail about finalize(), read section 3 (Avoiding Finalizers) in our Guide to the finalize Method in Java.

The Java String pool had gone through a major change in Java 7 when it was transferred from PermGen to HeapSpace. But for applications operating on version 6 and below, we should be more attentive when working with large Strings.

If we read a huge massive String object, and call intern() on that object, then it goes to the string pool, which is located in PermGen (permanent memory) and will stay there as long as our application runs. This blocks the memory and creates a major memory leak in our application.

The PermGen for this case in JVM 1.6 looks like this in VisualVM:

In contrast to this, in a method, if we just read a string from a file and do not intern it, then the PermGen looks like:

ThreadLocal (discussed in detail in Introduction to ThreadLocal in Java tutorial) is a construct that gives us the ability to isolate state to a particular thread and thus allows us to achieve thread safety.

When using this construct, each thread will hold an implicit reference to its copy of a ThreadLocal variable and will maintain its own copy, instead of sharing the resource across multiple threads, as long as the thread is alive.

Despite its advantages, the use of ThreadLocal variables is controversial, as they are infamous for introducing memory leaks if not used properly. Joshua Bloch once commented on thread local usage:

ThreadLocals are supposed to be garbage collected once the holding thread is no longer alive. But the problem arises when ThreadLocals are used along with modern application servers.

Modern application servers use a pool of threads to process requests instead of creating new ones (for example the Executor in case of Apache Tomcat). Moreover, they also use a separate classloader.

Since Thread Pools in application servers work on the concept of thread reuse, they are never garbage collected — instead, they're reused to serve another request.

Now, if any class creates a ThreadLocal variable but doesn't explicitly remove it, then a copy of that object will remain with the worker Thread even after the web application is stopped, thus preventing the object from being garbage collected.

4. Other Strategies for Dealing With Memory Leaks

Although there is no one-size-fits-all solution when dealing with memory leaks, there are some ways by which we can minimize these leaks.

Java profilers are tools that monitor and diagnose the memory leaks through the application. They analyze what's going on internally in our application — for example, how memory is allocated.

Using profilers, we can compare different approaches and find areas where we can optimally use our resources.

We have used Java VisualVM throughout section 3 of this tutorial. Please check out our Guide to Java Profilers to learn about different types of profilers, like Mission Control, JProfiler, YourKit, Java VisualVM, and the Netbeans Profiler.

By enabling verbose garbage collection, we're tracking detailed trace of the GC. To enable this, we need to add the following to our JVM configuration:

By adding this parameter, we can see the details of what's happening inside GC:

For projects on JDK 1.5 and above, Eclipse shows warnings and errors whenever it encounters obvious cases of memory leaks. So when developing in Eclipse, we can regularly visit the “Problems” tab and be more vigilant about memory leak warnings (if any):

We can measure and analyze the Java code's performance by executing benchmarks. This way, we can compare the performance of alternative approaches to do the same task. This can help us choose a better approach and may help us to conserve memory.

For more information about benchmarking, please head over to our Microbenchmarking with Java tutorial.

Finally, we always have the classic, old-school way of doing a simple code walk-through.

In some cases, even this trivial looking method can help in eliminating some common memory leak problems.

In layman's terms, we can think of memory leak as a disease that degrades our application's performance by blocking vital memory resources. And like all other diseases, if not cured, it can result in fatal application crashes over time.

Memory leaks are tricky to solve and finding them requires intricate mastery and command over the Java language. While dealing with memory leaks, there is no one-size-fits-all solution, as leaks can occur through a wide range of diverse events.

However, if we resort to best practices and regularly perform rigorous code walk-throughs and profiling, then we can minimize the risk of memory leaks in our application.

As always, the code snippets used to generate the VisualVM responses depicted in this tutorial are available on GitHub.