Today, it's not uncommon for applications to serve thousands or even millions of users concurrently. Such applications need enormous amounts of memory. However, managing all that memory may easily impact application performance.

In this tutorial, we'll see how ZGC manages to keep low pause times on even multi-terabyte heaps.

To understand how ZGC works, we need to understand the basic concepts and terminology behind memory management and garbage collectors.

Physical memory is the RAM that our hardware provides.

Of course, we store virtual memory in physical memory, and the OS is responsible for maintaining the mapping between the two. This mapping usually involves hardware acceleration.

Multi-mapping means that there are specific addresses in the virtual memory, which points to the same address in physical memory. Since applications access data through virtual memory, they know nothing about this mechanism (and they don't need to).

Effectively, we map multiple ranges of the virtual memory to the same range in the physical memory:

At first glance, its use cases aren't obvious, but we'll see later, that ZGC needs it to do its magic. Also, it provides some security because it separates the memory spaces of the applications.

Since we use dynamic memory allocation, the memory of an average application becomes fragmented over time. It's because when we free up an object in the middle of the memory, a gap of free space remains there. Over time, these gaps accumulate, and our memory will look like a chessboard made of alternating areas of free and used space.

Of course, we could try to fill these gaps with new objects. To do this, we should scan the memory for free space that's big enough to hold our object. Doing this is an expensive operation, especially if we have to do it each time we want to allocate memory. Besides, the memory will still be fragmented, since probably we won't be able to find a free space which has the exact size we need. Therefore, there will be gaps between the objects. Of course, these gaps are smaller. Also, we can try to minimize these gaps, but it uses even more processing power.

The other strategy is to frequently relocate objects from fragmented memory areas to free areas in a more compact format. To be more effective, we split the memory space into blocks. We relocate all objects in a block or none of them. This way, memory allocation will be faster since we know there are whole empty blocks in the memory.

When we create a Java application, we don't have to free the memory we allocated, because garbage collectors do it for us. In summary, GC watches which objects can we reach from our application through a chain of references and frees up the ones we can't reach.

A GC needs to track the state of the objects in the heap space to do its work. For example, a possible state is reachable. It means the application holds a reference to the object. This reference might be transitive. The only thing that matters that the application can access these objects through references. Another example is finalizable: objects which we can't access. These are the objects we consider garbage. 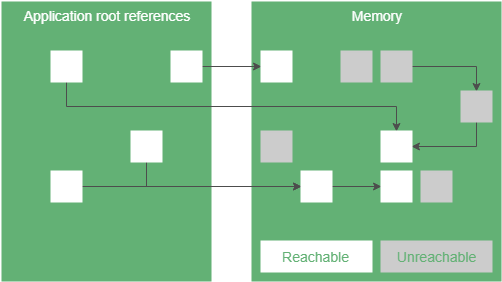 To achieve it, garbage collectors have multiple phases.

GC phases can have different properties:

Note that all of the above techniques have their strengths and weaknesses. For example, let's say we have a phase that can run concurrently with our application. A serial implementation of this phase requires 1% of the overall CPU performance and runs for 1000ms. In contrast, a parallel implementation utilizes 30% of CPU and completes its work in 50ms.

In this example, the parallel solution uses more CPU overall, because it may be more complex and have to synchronize the threads. For CPU heavy applications (for example, batch jobs), it's a problem since we have less computing power to do useful work.

Of course, this example has made-up numbers. However, it's clear that all applications have their characteristics, so they have different GC requirements.

ZGC intends to provide stop-the-world phases as short as possible. It achieves it in such a way that the duration of these pause times doesn't increase with the heap size. These characteristics make ZGC a good fit for server applications, where large heaps are common, and fast application response times are a requirement.

On top of the tried and tested GC techniques, ZGC introduces new concepts, which we'll cover in the following sections.

But for now, let's take a look at the overall picture of how ZGC works.

ZGC has a phase called marking, where we find the reachable objects. A GC can store object state information in multiple ways. For example, we could create a Map, where the keys are memory addresses, and the value is the state of the object at that address. It's simple but needs additional memory to store this information. Also, maintaining such a map can be challenging.

ZGC uses a different approach: it stores the reference state as the bits of the reference. It's called reference coloring. But this way we have a new challenge. Setting bits of a reference to store metadata about an object means that multiple references can point to the same object since the state bits don't hold any information about the location of the object. Multimapping to the rescue!

We also want to decrease memory fragmentation. ZGC uses relocation to achieve this. But with a large heap, relocation is a slow process. Since ZGC doesn't want long pause times, it does most of the relocating in parallel with the application. But this introduces a new problem.

Let's say we have a reference to an object. ZGC relocates it, and a context switch occurs, where the application thread runs and tries to access this object through its old address. ZGC uses load barriers to solve this. A load barrier is a piece of code that runs when a thread loads a reference from the heap – for example, when we access a non-primitive field of an object.

In ZGC, load barriers check the metadata bits of the reference. Depending on these bits, ZGC may perform some processing on the reference before we get it. Therefore, it might produce an entirely different reference. We call this remapping.

The next phase is concurrent. In this phase, we traverse the object graph, starting from the root references. We mark every object we reach. Also, when a load barrier detects an unmarked reference, it marks it too.

The last phase is also a stop-the-world phase to handle some edge cases, like weak references.

At this point, we know which objects we can reach.

ZGC uses the marked0 and marked1 metadata bits for marking.

A reference represents the position of a byte in the virtual memory. However, we don't necessarily have to use all bits of a reference to do that – some bits can represent properties of the reference. That's what we call reference coloring.

With 32 bits, we can address 4 gigabytes. Since nowadays it's widespread for a computer to have more memory than this, we obviously can't use any of these 32 bits for coloring. Therefore, ZGC uses 64-bit references. It means ZGC is only available on 64-bit platforms:

On top of that, we have 4 bits to store reference states:

In ZGC, relocation consists of the following phases:

Note that in the relocation phase, we didn't rewrite most of the references to the relocated addresses. Therefore, using those references, we wouldn't access the objects we wanted to. Even worse, we could access garbage.

When the application loads a reference, it triggers the load barrier, which then follows the following steps to return the correct reference:

And that's it, with the steps above we ensured that each time we try to access an object, we get the most recent reference to it. Since every time we load a reference, it triggers the load barrier. Therefore it decreases application performance. Especially the first time we access a relocated object. But this is a price we have to pay if we want short pause times. And since these steps are relatively fast, it doesn't impact the application performance significantly.

We can enable ZGC with the following command-line options when running our application:

Note that since ZGC is an experimental GC, it'll take some time to become officially supported.

In this article, we saw that ZGC intends to support large heap sizes with low application pause times.

To reach this goal, it uses techniques, including colored 64-bit references, load barriers, relocation, and remapping.