Every high-level language code, like Java, needs to be translated to machine native code for execution. This translation process can be either compilation or interpretation. However, there is also a third option. A combination that seeks to take advantage of both approaches.

In this tutorial, we'll explore how Java code gets compiled and executed on multiple platforms. We'll look at some Java and JVM design specifics. These will help us determine whether Java is compiled, interpreted, or a hybrid of both.

Let's start by looking into some basic differences between compiled and interpreted programming languages.

They require an explicit build step before execution. That is why we need to rebuild the program every time we make a code change.

Compiled languages tend to be faster and more efficient than interpreted languages. However, their generated machine code is platform-specific.

On the other hand, in interpreted languages (Python, JavaScript), there are no build steps. Instead, interpreters operate on the source code of the program while executing it.

Interpreted languages were once considered significantly slower than compiled languages. However, with the development of just-in-time (JIT) compilation, the performance gap is shrinking. We should note, however, that JIT compilers turn code from the interpreted language into machine native code as the program runs.

Furthermore, we can execute interpreted language code on multiple platforms like Windows, Linux, or Mac. Interpreted code has no affinity with a particular type of CPU architecture.

Java and the JVM were designed with portability in mind. Therefore, most popular platforms today can run Java code.

This might sound like a hint that Java is a purely interpreted language. However, before execution, Java source code needs to be compiled into bytecode. Bytecode is a special machine language native to the JVM. The JVM interprets and executes this code at runtime.

It is the JVM that is built and customized for each platform that supports Java, rather than our programs or libraries.

Modern JVMs also have a JIT compiler. This means that the JVM optimizes our code at runtime to gain similar performance benefits to a compiled language. 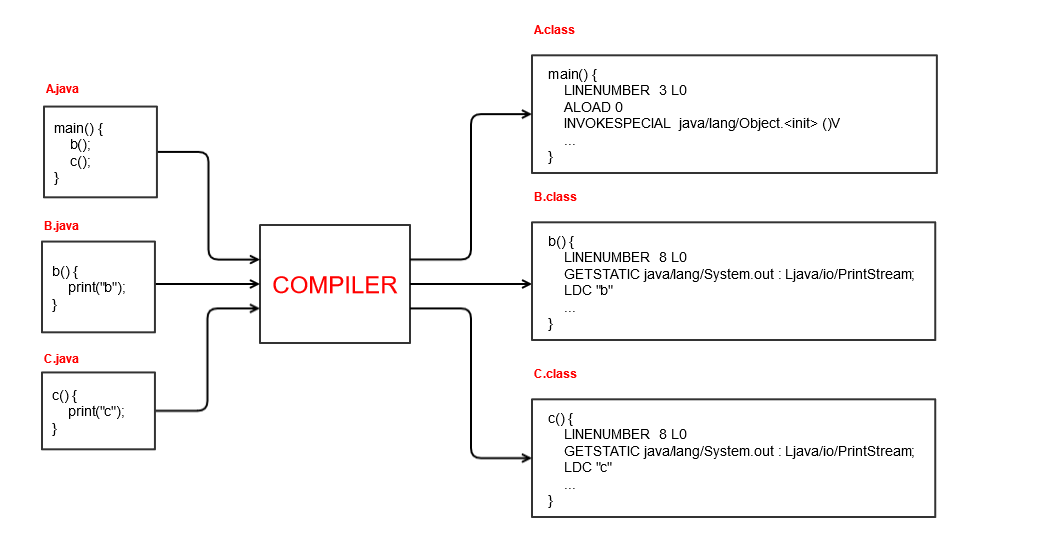 The compiled class files (bytecode) can be executed by the Java Virtual Machine (JVM):

Let's now take a deeper look into the JVM architecture. Our goal is to determine how bytecode gets converted to machine native code at runtime.

The JVM is composed of five subsystems: 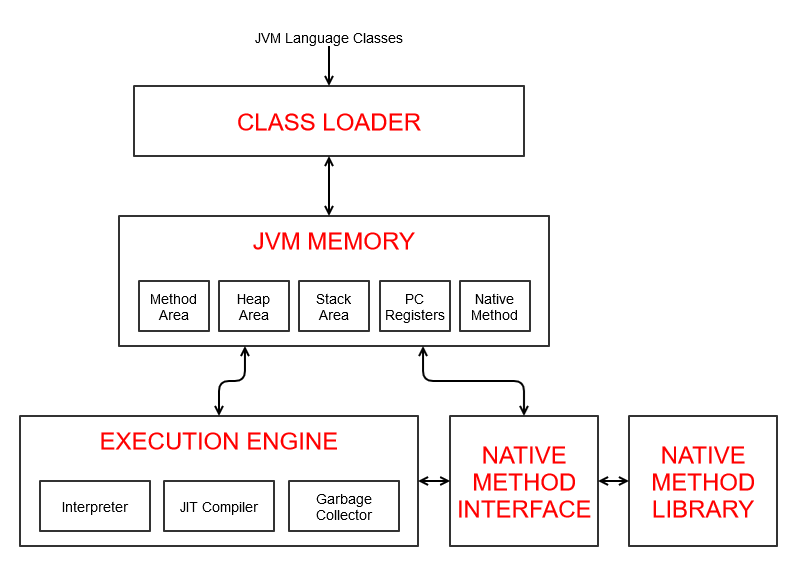 The JVM makes use of the ClassLoader subsystems to bring the compiled class files into JVM memory.

Besides loading, the ClassLoader also performs linking and initialization. That includes:

The execution engine subsystem is in charge of reading the bytecode, converting it into machine native code, and executing it.

Three major components are in charge of execution, including both an interpreter and a compiler:

The execution engine makes use of the Native method interface (JNI) to call native libraries and applications.

The main disadvantage of an interpreter is that every time a method is called, it requires interpretation, which can be slower than compiled native code. Java makes use of the JIT compiler to overcome this issue.

The JIT compiler doesn't completely replace the interpreter. The execution engine still uses it. However, the JVM uses the JIT compiler based on how frequently a method is called.

The JIT compiler compiles the entire method's bytecode to machine native code, so it can be reused directly. As with a standard compiler, there's the generation to intermediate code, optimization, and then the production of machine native code.

A profiler is a special component of the JIT compiler responsible for finding hotspots. The JVM decides which code to JIT compile based on the profiling information collected during runtime.

One effect of this is that a Java program can become faster at performing its job after a few cycles of execution. Once the JVM has learned the hotspots, it is able to create the native code allowing things to run faster.

Let's take a look at how the JIT compilation improves Java's runtime performance.

We'll use a simple recursive method to calculate the n-th Fibonacci number:

Then, we'll execute the same code with the JIT compiler disabled:

Finally, we'll implement and run the same algorithm in C++ and JavaScript for comparison.

Let's take a look at the measured average performances in nanoseconds after running the Fibonacci recursive test:

Interestingly, Java performed 33% better than C++ code, even when C++ is compiled with the O2 optimization flag enabled. As expected, C++ performed much better in the first few runs, when Java was still interpreted.

Similar to many other modern programming languages, Java uses a combination of a compiler and interpreter. The goal is to make use of the best of both worlds, enabling high performance and platform-neutral execution.

In this article, we focused on explaining how things work in HotSpot. HotSpot is the default open-source JVM implementation by Oracle. Graal VM is also based on HotSpot, so the same principles apply.

Most popular JVM implementations nowadays use a combination of an interpreter and a JIT compiler. However, it's possible that some of them use a different approach.

In this article, we looked into Java and the JVM internals. Our goal was to determine if Java is a compiled or interpreted language. We explored the Java compiler and the JVM execution engine internals.

Based on that, we concluded that Java uses a combination of both approaches.

The source code we write in Java is first compiled into bytecode during the build process. The JVM then interprets the generated bytecode for execution. However, the JVM also makes use of a JIT compiler during runtime to improve performances.