We'll see what the project Graal is and describe one of its parts, a high-performance dynamic JIT compiler.

When we compile our Java program (e.g., using the javac command), we'll end up with our source code compiled into the binary representation of our code – a JVM bytecode. This bytecode is simpler and more compact than our source code, but conventional processors in our computers cannot execute it.

To be able to run a Java program, the JVM interprets the bytecode. Since interpreters are usually a lot slower than native code executing on a real processor, the JVM can run another compiler which will now compile our bytecode into the machine code that can be run by the processor. This so-called just-in-time compiler is much more sophisticated than the javac compiler, and it runs complex optimizations to generate high-quality machine code.

The JDK implementation by Oracle is based on the open-source OpenJDK project. This includes the HotSpot virtual machine, available since Java version 1.3. It contains two conventional JIT-compilers: the client compiler, also called C1 and the server compiler, called opto or C2.

C1 is designed to run faster and produce less optimized code, while C2, on the other hand, takes a little more time to run but produces a better-optimized code. The client compiler is a better fit for desktop applications since we don't want to have long pauses for the JIT-compilation. The server compiler is better for long-running server applications that can spend more time on the compilation.

As we mentioned in the previous section, our Java program, compiled by javac, starts its execution in an interpreted mode. The JVM tracks each frequently called method and compiles them. In order to do that, it uses C1 for the compilation. But, the HotSpot still keeps an eye on the future calls of those methods. If the number of calls increases, the JVM will recompile these methods once more, but this time using C2.

This is the default strategy used by the HotSpot, called tiered compilation.

Let's now focus for a bit on C2, since it is the most complex of the two. C2 has been extremely optimized and produces code that can compete with C++ or be even faster. The server compiler itself is written in a specific dialect of C++.

However, it comes with some issues. Due to possible segmentation faults in C++, it can cause the VM to crash. Also, no major improvements have been implemented in the compiler over the last several years. The code in C2 has become difficult to maintain, so we couldn't expect new major enhancements with the current design. With that in mind, the new JIT compiler is being created in the project named GraalVM.

Project GraalVM is a research project created by Oracle. We can look at Graal as several connected projects: a new JIT compiler that builds on HotSpot and a new polyglot virtual machine. It offers a comprehensive ecosystem supporting a large set of languages (Java and other JVM-based languages; JavaScript, Ruby, Python, R,  C/C++, and other LLVM-based languages).

We'll of course focus on Java.

Graal is a high-performance JIT compiler. It accepts the JVM bytecode and produces the machine code.

There are several key advantages of writing a compiler in Java. First of all, safety, meaning no crashes but exceptions instead and no real memory leaks. Furthermore, we'll have a good IDE support and we'll be able to use debuggers or profilers or other convenient tools. Also, the compiler can be independent of the HotSpot and it would be able to produce a faster JIT-compiled version of itself.

The Graal compiler was created with those advantages in mind. It uses the new JVM Compiler Interface – JVMCI to communicate with the VM. To enable the use of the new JIT compiler, we need to set the following options when running Java from the command line:

What this means is that we can run a simple program in three different ways: with the regular tiered compilers, with the JVMCI version of Graal on Java 10 or with the GraalVM itself.

The JVMCI is part of the OpenJDK since JDK 9, so we can use any standard OpenJDK or Oracle JDK to run Graal.

What JVMCI actually allows us to do is to exclude the standard tiered compilation and plug in our brand new compiler (i.e. Graal) without the need of changing anything in the JVM.

The interface is quite simple. When Graal is compiling a method, it'll pass the bytecode of that method as the input to the JVMCI'. As an output, we'll get the compiled machine code. Both the input and the output are just byte arrays:

In real-life scenarios, we'll usually need some more information like the number of local variables, the stack size, and the information collected from profiling in the interpreter so that we know how the code is running in practice.

Essentially, when calling the compileMethod() of the JVMCICompiler interface, we'll need to pass a CompilationRequest object. It'll then return the Java method we want to compile, and in that method, we'll find all the information we need.

Graal itself is executed by the VM, so it'll first be interpreted and JIT-compiled when it becomes hot. Let's check out an example, which can be also found on the GraalVM's official site:

Now, we'll compile it and run it:

This will result in the output similar to the following:

We can see that it takes more time in the beginning. That warm-up time depends on various factors, such as the amount of multi-threaded code in the application or the number of threads the VM uses. If there are fewer cores, the warm-up time could be longer.

If we want to see the statistics of Graal compilations we need to add the following flag when executing our program:

This will show the data related to the compiled method, the time taken, the bytecodes processed (which includes inlined methods as well), the size of the machine code produced, and the amount of memory allocated during compilation. The output of the execution takes quite a lot of space, so we won't show it here.

4.4. Comparing with the Top Tier Compiler

Let's now compare the above results with the execution of the same program compiled with the top tier compiler instead. To do that, we need to tell the VM to not use the JVMCI compiler:

We can see that there is a smaller difference between the individual times. It also results in a briefer initial time.

4.5. The Data Structure Behind Graal

As we said earlier, Graal basically turns a byte array into another byte array. In this section, we'll focus on what's behind this process. The following examples are relying on Chris Seaton's talk at JokerConf 2017.

Basic compiler's job, in general, is to act upon our program. This means that it must symbolize it with an appropriate data structure. Graal uses a graph for such a purpose, the so-called program-dependence-graph.

In a simple scenario, where we want to add two local variables, i.e., x + y, we would have one node for loading each variable and another node for adding them. Beside it, we'd also have two edges representing the data flow:

The data flow edges are displayed in blue. They're pointing out that when the local variables are loaded, the result goes into the addition operation.

Let's now introduce another type of edges, the ones that describe the control flow. To do so, we'll extend our example by calling methods to retrieve our variables instead of reading them directly. When we do that, we need to keep track of the methods calling order. We'll represent this order with the red arrows:

Here, we can see that the nodes didn't change actually, but we have the control flow edges added.

We can examine the real Graal graphs with the IdealGraphVisualiser. To run it, we use the mx igv command. We also need to configure the JVM by setting the -Dgraal.Dump flag.

Let's check out a simple example:

This has a very simple data flow: 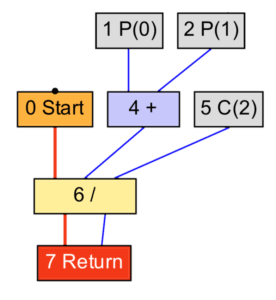 In the graph above, we can see a clear representation of our method. Parameters P(0) and P(1) flow into the add operation which enters the divide operation with the constant C(2). Finally, the result is returned.

We'll now change the previous example to be applicable to an array of numbers:

We can see that adding a loop led us to the much more complex graph: 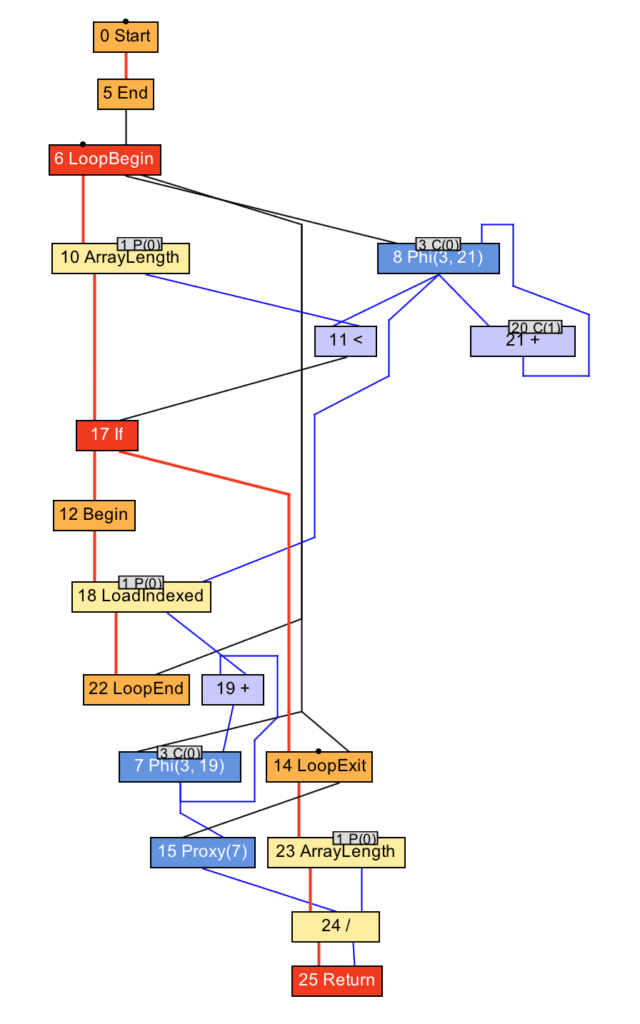 What we can notice here are:

This data structure is sometimes called a sea-of-nodes, or a soup-of-nodes. We need to mention that the C2 compiler uses a similar data structure, so it's not something new, innovated exclusively for Graal.

It is noteworthy remember that Graal optimizes and compiles our program by modifying the above-mentioned data structure. We can see why it was an actually good choice to write the Graal JIT compiler in Java: a graph is nothing more than a set of objects with references connecting them as the edges. That structure is perfectly compatible with the object-oriented language, which in this case is Java.

It is also important to mention that we can also use the Graal compiler in the Ahead-of-Time compiler mode in Java 10. As we said already, the Graal compiler has been written from scratch. It conforms to a new clean interface, the JVMCI, which enables us to integrate it with the HotSpot. That doesn't mean that the compiler is bound to it though.

One way of using the compiler is to use a profile-driven approach to compile only the hot methods, but we can also make use of Graal to do a total compilation of all methods in an offline mode without executing the code. This is a so-called “Ahead-of-Time Compilation”, JEP 295, but we'll not go deep into the AOT compilation technology here.

The main reason why we would use Graal in this manner is to speed up startup time until the regular Tiered Compilation approach in the HotSpot can take over.

In this article, we explored the functionalities of the new Java JIT compiler as the part of the project Graal.

We first described traditional JIT compilers and then discuss new features of the Graal, especially the new JVM Compiler interface. Then, we illustrated how both compilers work and compared their performances.

After that, we've talked about the data structure that Graal uses to manipulate our program and, finally, about the AOT compiler mode as another way to use Graal.

As always, the source code can be found over on GitHub. Remember that the JVM needs to be configured with the specific flags – which were described here.