In this tutorial, we’ll study the differences between the underlay and the overlay network. Networks and the Internet itself rely on multiple physical and logical resources to work properly. In summary, we can consider that these resources are maintained and provided in the overlay and underlay networks.

Modern networks are complex and require lots of physical and logical resources to work as expected. In the core network, we find different equipment, typically called physical appliances. These appliances deal with network traffic forwarding. Making data move from one point to another is the fundamental task and objective of networking.

Furthermore, several networking protocols are processed in the previously presented context (typically called the core network). The most essential for making data transferred in a network are related to the lower layers of the OSI model. Prominent examples follow:

On the top of the core network, we have multiple servers working to provide data and services. These services employ other networking protocols that usually are not immediately related to the transmission of data in a network but to how to read and process these data already in their destination point.

In summary, the underlay network means all the physical infrastructure that enables frames and packets to be forwarded from o one point to another. In other words, we can understand the underlay networks as the “place” on which it is possible to connect and communicate with networking devices.

In this way, as commented in the previous section, the underlay network refers to the core network, thus taking place in the first three layers of the OSI model: physical, data link, and network.

Furthermore, we can assume that the fourth layer of the OSI model (transport) has some characteristics that include it in the core network. However, this layer actually works as a transition layer between the underlay network and the overlay network.

The following image depicts a network topology and highlights aspects that make it the underlay network at all: 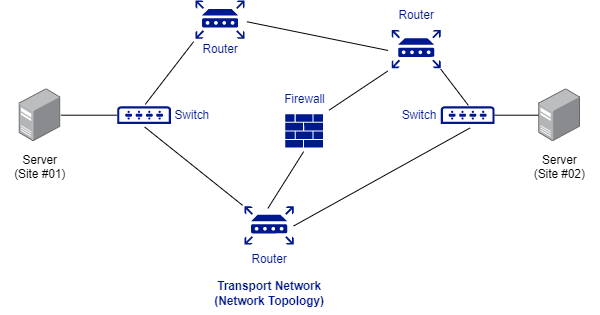 Finally, it is relevant to highlight that the protocols that enable underlay networking are mostly related to ethernet switching, routing, etc.

In short, overlay networks provide software-driven transportation of network traffic, operating over the underlay network and abstracting low-level details of traffic forwarding. Basically, we can say that overlay networks implement the concept of virtual networks.

In this way, the overlay network enables operators and managers to use the same network infrastructure to create multiple logical networks or even to create a virtual network over the Internet, connecting devices deployed in different physical networks.

The following image shows a representation of overlay networks built in a pre-existing underlay network: 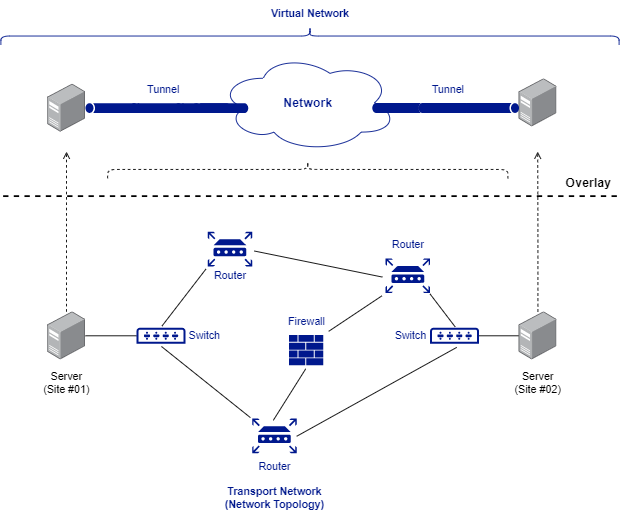 There exist multiple protocols employed to do the transportation of data in overlay networks. Among the most famous of them, we have the layer 2 and layer 3 (OSI model) tunneling ones:

It is important to highlight that, as the overlay networks are software-based, they are much more flexible than a hardware alternative. Thus, altering the abstract network topology of a virtual network is not as challenging as it is in the context of underlying networks.

However, virtual networks usually impose additional processes to enable traffic forwarding. Examples are encapsulation and cryptography processes. These processes may represent a series of overheads that may increase the latency and decrease the throughput in a networked system.

With the popularization of networks, their infrastructure became more and more complex to accomplish the requirements of different users. So, nowadays, networks are a sophisticated mix of software and hardware resources enabling data exchange and service provision.

The concepts of underlay and overlay networks got forged to organize and create a clear frontier between the networks’ physical and virtual environments.

The underlay network means all the physical infrastructure that supports traffic forwarding from one point to another. It includes all the network function equipment, besides the cables and other means of transmission used to communicate them. Thus, when we talk about the underlay network, we talk about — mostly — the first three layers of the OSI model (and the fourth layer, in some aspects).

The overlay network, in turn, represents an abstraction layer over the underlay network. With this layer, we can create virtual networks direct connecting machines that are not in the same physical network. A relevant concept in this context is tunneling, which means transmitting private data over a public infrastructure, guaranteeing its security, privacy, and integrity.

The following table summarizes and compares some characteristics of underlay and overlay networks:

We can conclude that the underlay networks are essential to enable communication — and the Internet as a whole — to happen in the digital world. However, overlay networks became a crucial resource to properly organize these communications, making it possible to create virtual networks and connect different network infrastructures as a single one.