From an engineering point of view, networks typically consider the OSI model or the TCP/IP model to define and organize their operation. These models, in turn, contemplate different layers, such as the network layer, the transport layer, and the application layer.

Each network layer has particular protocols that implement a myriad of functionalities. Examples are the IP at the network layer, TCP and UDP at the transport layer, and HTTP at the application layer.

These protocols evolve, thus being updated and extended over time. So, it is natural that network protocols have multiple versions.

In this context, this tutorial holistically explores the HTTP application protocol. First, we’ll have a brief review of application protocols. Thus, we’ll study the general purposes of HTTP. Finally, we’ll see the main differences among the HTTP versions and compare them in a systematic summary.

Application layer protocols refer to an abstract network layer providing end-to-end communication between different computational applications. It is the 7th layer of the OSI model and the 4th layer of the TCP/IP model.

Naturally, the application layer uses the functionalities of the lower layers. For example, application protocols assume that other layers tackle the communication with the correct destination computer connected in the network.

HTTP is an application protocol (layer 7 OSI and layer 4 TCP/IP) employed to create distributed hypermedia systems. Since it operates on the application layer, it is agnostic of several networking aspects, such as addressing and transmission.

Historically, HTTP emerged as a simple protocol to enable communication between clients and servers over the Internet. From its release, HTTP became one of the most relevant protocols to exchange information on the World Wide Web.

In this way, HTTP has been used on the Internet since the ’90s. The first release of HTTP (0.9) was much limited. This version only enabled clients to request information from a server using a single operation: GET.

The first HTTP release only supported transmitting ASCII data. However, in the following releases, this support expanded to other data types.

HTTP relies on TCP/IP to work. It means that HTTP is a connection-based protocol. In such a way, we can understand an HTTP session as a sequence of message exchanges between a server connected to a client.

In the following subsections, we’ll explore each released version of HTTP, from 1.0 to 3.0, focusing on their particular characteristics and novelty compared to the previously released version.

As previously presented, the first version of HTTP only allowed getting information from a server. However, it became insufficient as the Internet evolved and new functionalities arose.

Version 1.0 of HTTP brings several new utilities. Let’s see some of them:

In summary, HTTP 1.0 got much more robust than the 0.9 version. The most responsible for the protocol improvements are the HTTP header and the new HTTP methods.

So, the HTTP header enabled clients to send and receive different file types and exchange relevant metadata. The new methods, in turn, enabled the clients to both recover only the metadata about a document (HEAD) and transfer data from the client to the server (POST).

Version 1.1 of HTTP was released in 1997, only one year after the previous version 1.0. HTTP 1.1 is an enhancement of HTTP 1.0, providing several extensions.

Among the most relevant enhancements, we can cite the following:

In addition to the highlighted enhancements, there are many others introduced in version 1.1 of HTTP, such as compression and decompression, multi-language support, and byte-range transfers.

The HTTP CONNECT can create a tunnel through a proxy server. TRACE executes a loopback test in the path from a client to the destination server. Finally, OPTIONS returns information about the available communications options with the server.

HTTP version 2.0 was officially released in 2015, about eighteen years after the HTTP 1.1. Particularly, HTTP 2.0 focused on improving the protocol performance.

To do that, HTTP 2.0 implemented several features to improve connections and data exchange. Let’s see some of them:

Furthermore, HTTP 2.0 became a binary protocol, replacing the previous HTTP plain text versions. In summary, we can see HTTP 2.0 as a patch of enhancements to solve the problems and limitations of the last HTTP versions.

HTTP 3.0 is an Internet-Draft, different from the previous HTTP versions, which were/are Request For Comments (RFC) documents of the Internet Engineering Task Force (IETF). Its first draft was published in 2020.

The main difference between HTTP 2.0 and HTTP 3.0 is the employed transport layer protocol. In HTTP 2.0, we have TCP connections with or not TLS (HTTPS and HTTP). HTTP 3.0, in turn, is designed over QUIC (Quick UDP Internet Connections).

QUIC, in short, is a transport layer protocol with native multiplexing and built-in encryption. QUIC provides a quick handshake process, besides being able to mitigate latency problems in lossy and slow connections.

In addition to the potential benefits inherited from QUIC, another relevant characteristic of HTTP 3.0 is that it always creates encrypted connections. So, it is similar to always employing HTTPS in current HTTP 2.0.

Currently, HTTP is a really relevant protocol, supporting multiple systems executing on the Internet. First released in 1991, this protocol had several updates, going through several versions.

From the first release (version 0.9) to the release of HTTP 2.0, we had multiple enhancements on the functionalities of HTTP, besides extensions in the protocol to add new methods and features.

In HTTP 3.0, however, the main novelty here is not a particular new feature. Actually, HTTP 3.0 replaces the transport layer protocol employed by HTTP from its first version, TCP, with a new one: QUIC.

By replacing TCP with QUIC, the HTTP developers expect, among other improvements, to achieve native and standard encryption (there are no more HTTP and HTTPS, every HTTP communication is encrypted) and fast establishment of connections.

The image next summarizes the evolution of HTTP from its first release (version 0.9) to its last proposal (version 3.0): 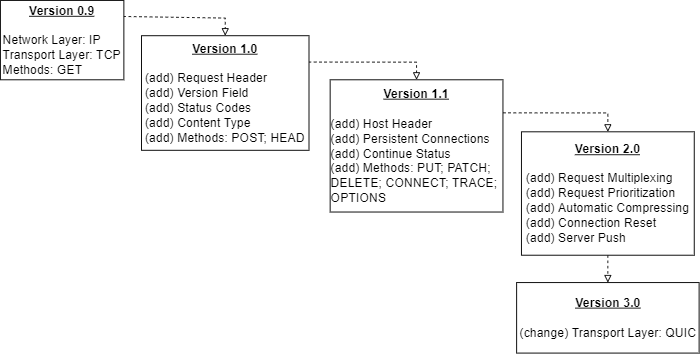 In this tutorial, we learned about HTTP. In special, we focused on exploring the HTTP protocol evolution through its different versions. Initially, we studied broad definitions of application layer protocols. So, we investigated HTTP, understanding its features in each available version. Finally, we reviewed all the presented concepts in a systematic summary.

From a simple plain text protocol enabling web browsing in its first versions, HTTP became a powerful binary protocol that supports several different systems nowadays. So, we can conclude that HTTP plays a crucial role on the current World Wide Web.