In artificial intelligence and machine learning, classification refers to the machine’s ability to assign the instances to their correct groups.

For the machine to be able to decide how to assign an instance to its group, it has to learn the patterns of that assignment from the training features available in a labeled training data set.

In this type, the machine should classify an instance as only one of two classes; yes/no, 1/0, or true/false.

The classification question in this type is always in the form of yes/no. For example, does this image contain a human? Does this text has a positive sentiment? Will the price of a particular stock increase in the next month?

In this type, the machine should classify an instance as only one of three classes or more.

The following are examples of multiclass classification:

SVM is a supervised machine learning algorithm that helps in classification or regression problems. It aims to find an optimal boundary between the possible outputs.

-dimensional space. The data points with the minimum distance to the hyperplane (closest points) are called Support Vectors.

In the image below, the Support Vectors are the 3 points (2 blue and 1 green) laying on the scattered lines, and the separation hyperplane is the solid red line: 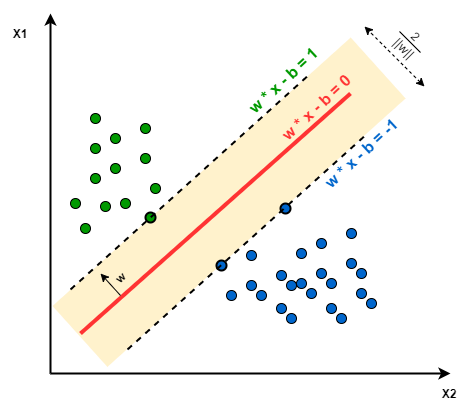 The computations of data points separation depend on a kernel function. There are different kernel functions: Linear, Polynomial, Gaussian, Radial Basis Function (RBF), and Sigmoid. Simply put, these functions determine the smoothness and efficiency of class separation, and playing around with their hyperparameters may lead to overfitting or underfitting.

The idea is to map data points to high dimensional space to gain mutual linear separation between every two classes. This is called a One-to-One approach, which breaks down the multiclass problem into multiple binary classification problems. A binary classifier per each pair of classes.

Another approach one can use is One-to-Rest. In that approach, the breakdown is set to a binary classifier per each class.

A single SVM does binary classification and can differentiate between two classes. So that, according to the two breakdown approaches, to classify data points from

Let’s take an example of 3 classes classification problem; green, red, and blue, as the following image: 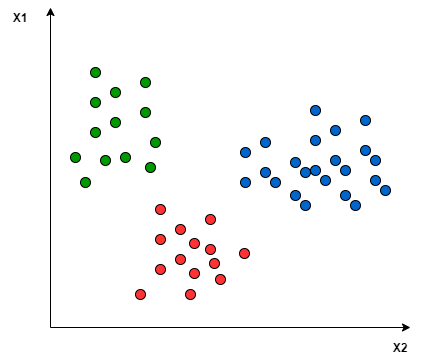 Applying the two approaches to this data set results in the followings:

In the One-to-One approach, we need a hyperplane to separate between every two classes, neglecting the points of the third class. This means the separation takes into account only the points of the two classes in the current split. For example, the red-blue line tries to maximize the separation only between blue and red points. It has nothing to do with green points: 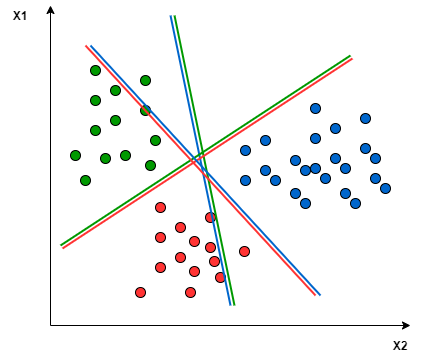 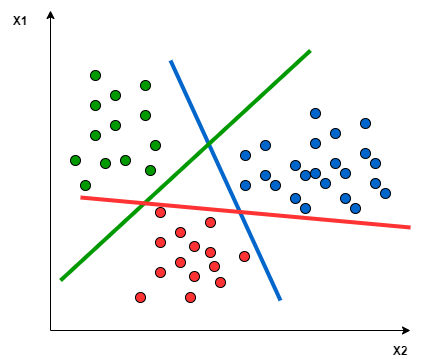 One of the most common real-world problems for multiclass classification using SVM is text classification. For example, classifying news articles, tweets, or scientific papers.

In this code, we use the Iris flower data set. That data set contains three classes of 50 instances each, where each class refers to a type of Iris plant.

We’ll start our script by importing the needed classes:

Load Iris data set from Scikitlearn, no need to download it separately:

from the target column (class label)

We’ll create two objects from SVM, to create two different classifiers; one with Polynomial kernel, and another one with RBF kernel:

To calculate the efficiency of the two models, we’ll test the two classifiers using the test data set:

Finally, we’ll calculate the accuracy and f1 scores for SVM with Polynomial kernel:

In the same way, the accuracy and f1 scores for SVM with RBF kernel:

That code will print the following results:

For the accuracy score, it shows the percentage of the true positive and true negative to all data points. So, it’s useful when the data set is balanced.

For the f1 score, it calculates the harmonic mean between precision and recall, and both depend on the false positive and false negative. So, it’s useful to calculate the f1 score when the data set isn’t balanced.

Playing around with SVM hyperparameters, like C, gamma, and degree in the previous code snippet will display different results. As we can see, in this problem, SVM with RBF kernel function is outperforming SVM with Polynomial kernel function.