In this tutorial, we’ll show a method for estimating the effects of the depth and the number of trees on the performance of a random forest.

A Random Forest is an ensemble of Decision Trees. We train them separately and output their average prediction or majority vote as the forest’s prediction.

However, we need to set the hyper-parameters that affect learning before training the trees. In particular, we need to decide on the number of trees (

) and their maximal depth (

In this article, we won’t deal with setting

but estimating their effects on the forest’s performance. We’re interested in finding out how strong their influence is, whether or not they interact, and what type of relationship they have with the performance score. Does it change linearly with

, or is the dependence more complex? Which hyper-parameter is more important? Are both influential, or is one of them irrelevant?

To estimate the influence of

on the forest, we need to check if its test scores vary with the changes in the hyper-parameters. So, we evaluate

at their various values and infer their effects based on the experimental results. But, this begs the question: what is an effect in statistics?

There’s no universally accepted definition of a factor’s effect on the response variable’s values. Which one we go with depends on what we deem the most natural way to describe “an effect” and our capabilities to measure it empirically.

For example, let’s say we record the response

at two levels of a factor

). We can define the

as the change in the mean values of

increases from the low to the high values. Alternatively, we can use the medians instead of means or define the effect as the probability that a random value we draw from the distribution of

is higher than a randomly selected value of

In this article, we’ll go with the differences in mean values of

. The reason is that it’s the most common approach in practice, and the theory on the design of experiments with like-defined effects is well-established.

3.2. The Bigger Picture: the Nuisance Factors

The variability of test scores isn’t due only to

. The partitioning of data into training and test sets also affects performance. What’s more, the process of training forest models is stochastic in itself. So, we can get different outcomes by training the forest using the same data multiple times.

That means we should consider other sources of variability, not just the hyper-parameters

whose effects we want to determine, and evaluate

at different levels of the other factors. They’re called nuisance factors and represent the variability sources we acknowledge but whose values we don’t plan to control and analyze in our experiment. Let’s list a few possible candidates:

To keep things simple, we won’t consider them all. We’ll use only

as the nuisance factors.

. To do so, we evaluate each combination of

on the same block of nuisance values’ pairs. Then, we can construct those pairs using a Graeco-Latin Square. So, if we have

and the same number of train set sizes:

, we arrange them in a

matrix so that all the pairs are different and each value appears only once in each column and each row.

In the language of the design of experiments theory, we’d say that we block for

Further, we should choose the nuisance values randomly in a way that doesn’t bias the effects of the depth and the number of trees to specific ranges of the nuisance factors’ values. To do so, we can divide the ranges of

equally spaced intervals. Then, we randomly select a value from each interval.

3.4. How Many Nuisance Values?

We explained how to arrange selected values into

blocks. However, we first need to determine

, the number of values we’ll work with.

That choice shouldn’t be arbitrary since the statistical power of analysis depends on it. We can define the maximal acceptable

) around the means of

for any choice of

and the selected level

to the smallest value that keeps the width below the threshold.

We need the standard deviation

to calculate the width. If

(which is the case if we use a normalized score such as accuracy),

can be at most

. So, we find the smallest

is the appropriate critical value for the standard normal distribution. The value of

. If we can justify other choices of

, we can also apply this method. To find such

, we rely on theory and the results of previous research. However, if they’re not available, we should conduct a preliminary experiment to estimate

. Then, we use the estimate to find

Much in this step depends on our assumptions and the scope of questions we want to answer. In practice, we’ll define

for some particular choices of

, we use them as our

). In that case, our conclusions will be restricted only to those values, and we won’t be able to justify extrapolation to other choices of

On the other hand, if we want to generalize inference to any

in the corresponding ranges, then we should select the

randomly and treat the factors as random variables.

3.6. The Main and Simple Effects

. While doing so, we distinguish between the main and simple effects.

The main effect of a factor shows how the response

changes when we vary the factor irrespective of the other factor’s values. For instance, we estimate the main effect of

by calculating the means of

. If we’re reasonably sure the dependence of

may be quadratic at most, we need only three values of

values are needed for capturing a dependence of order

A simple effect illustrates how changing a factor affects

at a particular value of another factor or a combination of values of two and more other factors. So, if the simple effects of

at all the values of

are the same, we conclude that

These expectations and assumptions translate to a particular mathematical model of

For example, let’s say we assume that the effects of

are linear and that two factors may interact. Our model could look like this:

is a zero-mean normal variable representing the variability in

not accounted for by

.  Usually, we assume that the

variables are identically distributed but we can go for complex models. The coefficients

denote the effects. If any of them is close to zero (which we can check using a hypothesis test or inspecting the CIs), we may conclude that the corresponding effect doesn’t exist.

would mean that the means of

for the two choices of

) are more or less the same and their confidence intervals overlap. If

, we expect the line connecting the mean

values at evaluated at

to be parallel to the line connecting the means at

If we want to examine super-linear dependencies and effects, we use

. However, we’ll quickly run into problems because we’ll train and test

forests for each of the

. Depending on the size of our dataset, that could take a lot of time.

To address this issue, we can adopt a less ambitious experimental plan. Instead of aiming to test for an order-13 relationship, for which we’ll need

, we can settle for a lower-order limit. Much of the time, linear and quadratic models are reasonably accurate approximations of the real-world processes scientists examine. In our case, we could say that the coefficients of

, and all higher-order terms are zero or so close to zero that their effects on

Therefore, our final model could be:

, we’ll have three values of

. Let’s code them as

(high). Our results will make a table of the form:

represents a combination of

s are the recorded test scores. So, we replicate each block of

nuisance pairs across all

, train a forest, evaluate its test score, and then use the results to make plots and estimate the

coefficients in the model (2).

If our assumptions don’t hold, we may draw invalid conclusions. For instance, if we limit the model to linear main effects, we may conclude there’s no effect even though a quadratic relationship between 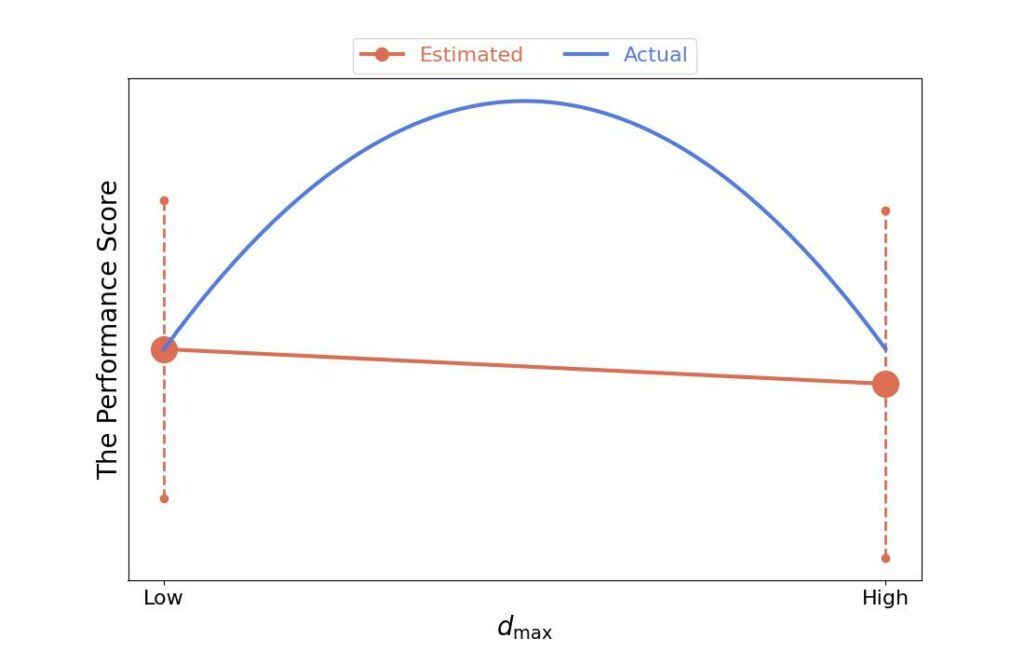 Further, how to define an effect is still an open question in the statistical analysis of algorithms. Using differences in means as effects makes an implicit assumption that the mean values are representative of the distributions of

. That may not be the case with every random forest and dataset.

In our final model,

have fixed effects. That means that we shouldn’t generalize the conclusions to the ranges of values outside of those tested. If we want to do so, we should go with random-effects models. They treat the effects as random variables and allow extrapolation to unseen values.

We deliberately didn’t mention statistical significance, although it’s a common practice to conduct null-hypothesis significance tests (NHSTs). A growing body of literature criticizes the NHST framework. The main issue is that the subtleties of the NHST methods are prone to misinterpretation and confuse the majority of practitioners. That doesn’t mean that we shouldn’t use the NHSTs, but we should be careful and know what we’re doing.

Finally, we should keep in mind that fitting a forest may take a long time, so even if we go for a simpler model, estimating the effects could prove infeasible. In that case, we should reduce the size of the training set.

5. How to Estimate Effects: A Quick Summary

We can vary some steps if we need, but the procedure to estimate the effects of

on a random forest’s performance will look more or less like the one above.

In this article, we presented a methodology for estimating how the depth and number of trees affect the performance of a random forest. We defined their hyper-parameters effects through differences in means, but there may be more appropriate effect definitions;;