In this tutorial, we’ll learn what a priority queue is and understand how it works. Priority queues have many applications on other algorithms such as Dijkstra and scheduling algorithms. Priority queues are very important to systems that juggle multiple programs and their execution (programs are chosen to run based on their priority). They are also very important to networking systems, like the internet, because they can help prioritize important data to make sure it gets through faster.

A priority queue is a special type of queue. Each queue’s item has an additional piece of information, namely priority. Unlike a regular queue, the values in the priority queue are removed based on priority instead of the first-in-first-out (FIFO) rule. The following example illustrates a priority queue with an ordering imposed on the values from least to the greatest:

, etc. denotes the value of items while

, etc. denotes the priority of items. So the item with the highest priority in this example is

(with the priority of 1) that is removed first. And the lowest priority item,

(with the priority of 19), will be removed at the end of the process. In this tutorial, from now on, we’ll use priority as the value of items since other information can be easily attached to the queue’s elements. The main operations on a priority queue include:

2.1. Characteristics of a Priority Queue

A priority queue is an extension of a queue that contains the following characteristics:

There are two types of priority queues:

A binary heap is a type of binary tree (but not a binary search tree) that has the following properties:

Throughout this tutorial, we’ll be using examples of a max heap. Let’s examine the following example to understand the heap structure better: 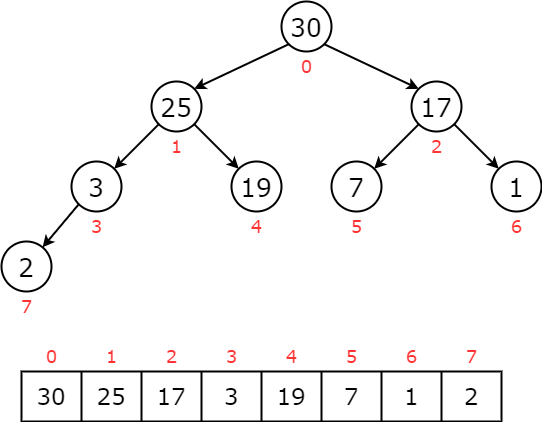 , the left child will be at

, and the right child will be at

. The parent will be at

(except for the root node at

).  For a more in-depth overview of the heap data structure, we can read the article which explains Heap Sort in Java.

The common operations that we can perform on a priority queue include insertion, deletion, and peek. We’ll use a binary heap to maintain a max-priority queue. The item at the root of the heap has the highest priority among all elements. If we want to add a new node to a binary heap, we need to ensure that our two properties of the heap are maintained after the new node is added.  At first, we insert the new item at the end of the priority queue. If it is found greater than its parent node, elements are swapped. This process continues until the new item is placed in the correct position. Let’s go through an example to understand the insertion process. If we add

to the priority queue, we end up with: 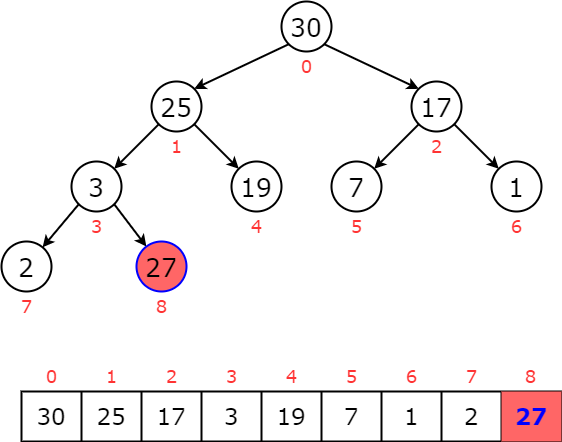 is greater than its parent 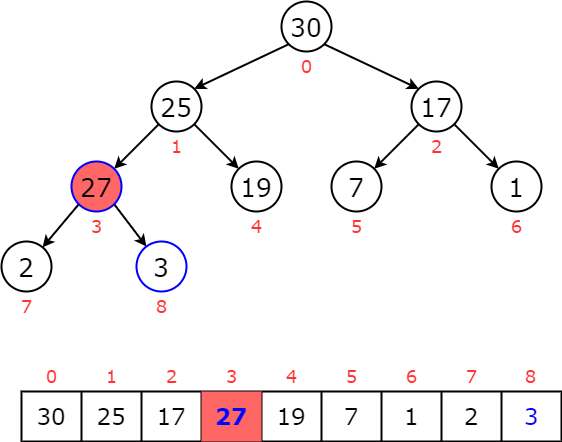 is still greater than its new parent 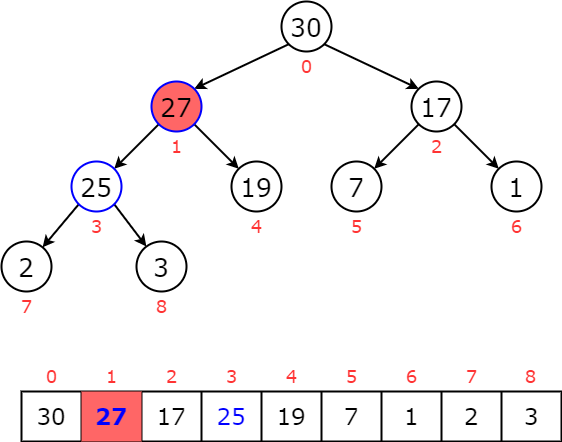 Now, we notice that

is smaller than its parent, so we stop and reach our priority queue: 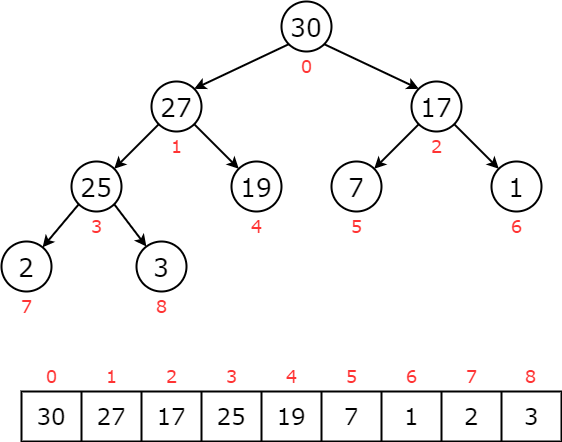 The following code shows the details of the insertion function:

with the last item 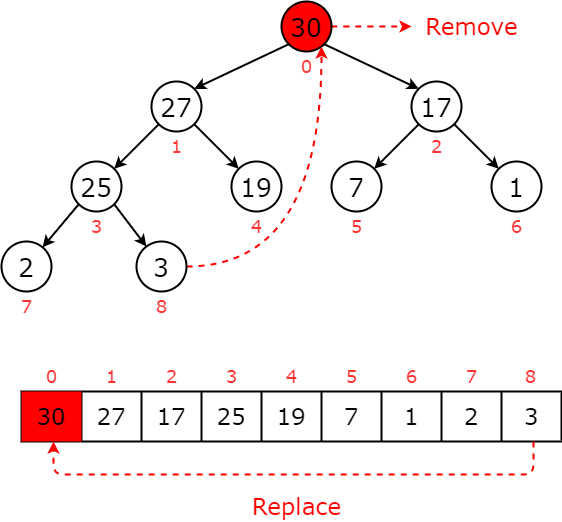 The new priority queue is now violent the max heap’s property where the root node is smaller than its children: 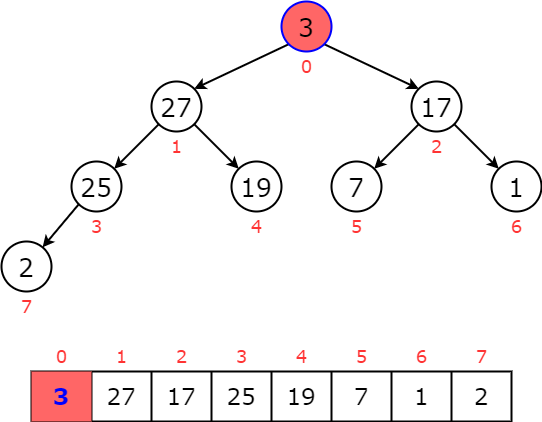 Then, we swap node

with the greater child until it reaches the leaf or greater than both children: 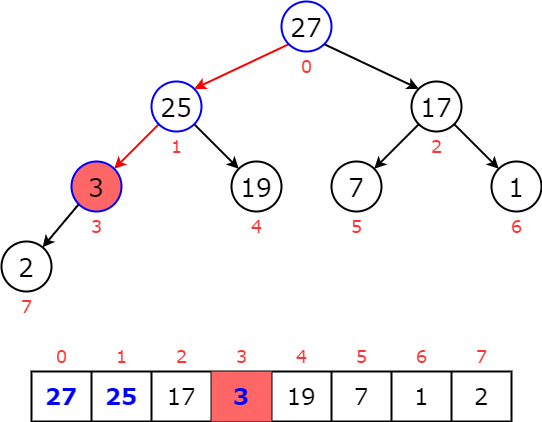 is greater than its child of

, we stop and reach our priority queue: 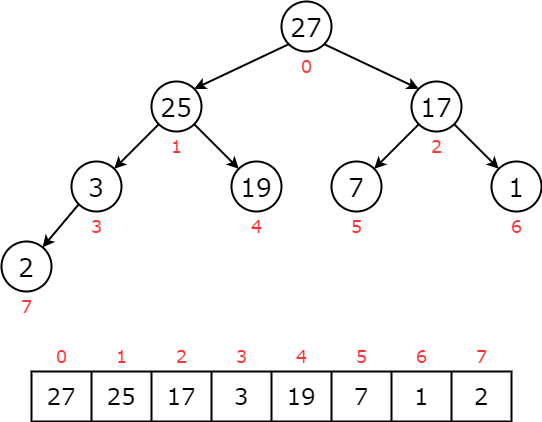 The following code shows the details of the deletion function:

If we want to peek and see the largest node in a heap quickly, that is easy. Just return a pointer to the root:

For insertion, we may have to heapify the entire heap data structure. So, while the insertion process only takes O(1) time, the heapify process will take

. The same goes for deletion. We know where the max priority value is, but remaking the heap still takes

time. These are guaranteed worst-case efficiency since a binary heap always guarantees a complete tree. The time complexity to extract the value from a priority queue is

since we only need to peek at the root node of the heap.

Priority queues are widely applied on other algorithms as well as in real-world systems. The main applications include: