In this tutorial, we explain the concepts of interpolation and regression and their similarities and differences. Both words are frequently used in fields like banking, sports, literature, and law, among others. with different interpretations. Here, we’ll restrict the explanation to the point of view of Mathematics.

First, we’ll introduce both concepts in detail. Then, we’ll focus on their similarities and differences.

2. The Concept of Interpolation

Interpolation is a family of methods studied in Numerical Analysis (NA), a field of Mathematics. NA is oriented to finding approximate solutions to mathematical problems. Those solutions should be as accurate as possible.

Let’s assume that we have a set of points that correspond to a certain function. We don’t know the exact expression of the function, but just those points. And we want to calculate the value of the function on some other points. Interpolation allows for approximating this function by using other simpler functions. The approximated function should pass through all the points in the previously known set. Then, it could be used to estimate other points not included in the set.

Linear interpolation is a method used to interpolate between two points by a straight line. Let’s consider two points (

). Then the equation of the line passing by those points is y = a + bx, where:

In the following figure, the blue line represents the linear interpolant between the two red points. 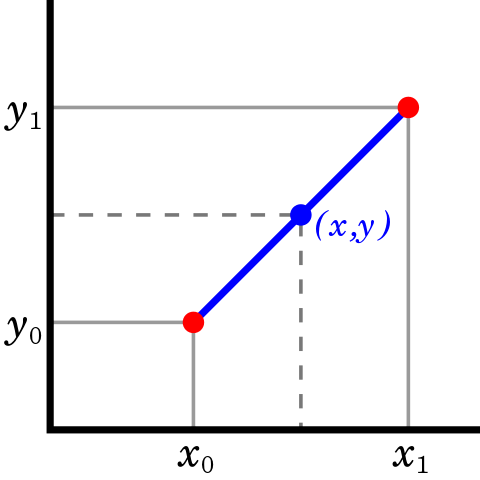 Let’s assume that we’re approximating a value of some function f with a linear polynomial P. Then, the error R = f(x) – P(x) is calculated by:

for x between the

We can also use linear interpolation with more than two points, but the error increases according to the degree of curvature of the function.

Polynomial interpolation is a method used to interpolate between

points by a polynomial. Let’s consider a set with

points. Then we can always find a polynomial that passes through those

points. And this polynomial is unique. Polynomial interpolation is advantageous because polynomials are easier to evaluate, differentiate, and integrate.

There are different approaches to calculating the coefficients of the interpolation polynomial. One of them is using the Lagrange polynomial defined as:

The following blue curve shows the interpolation polynomial adjusted to the red dots. 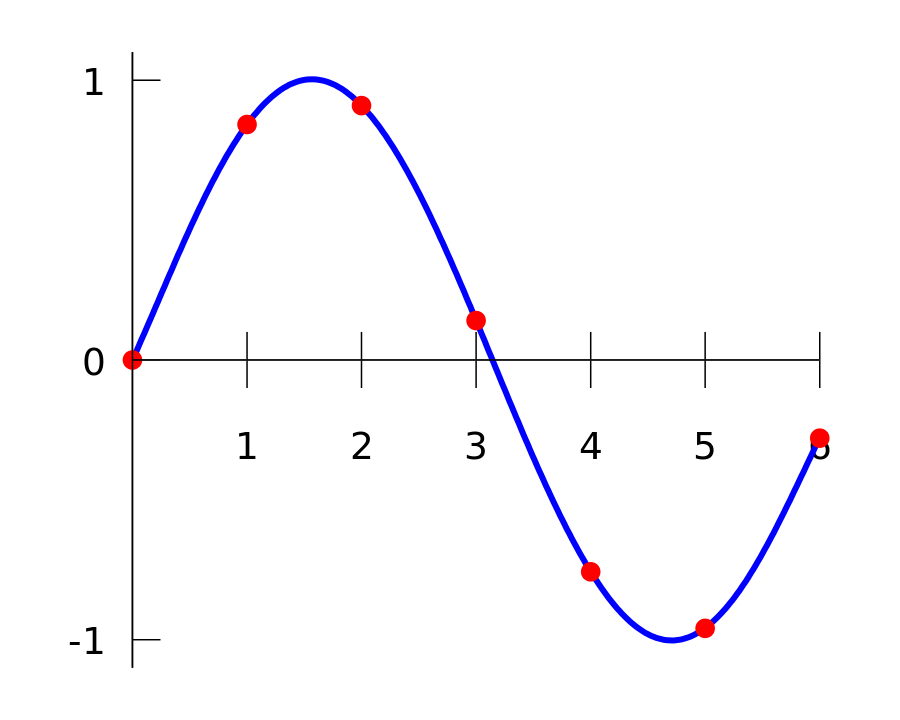 Splines are special functions defined piecewise using low-degree polynomials. Spline’s popularity comes from its easy evaluation, accuracy, and ability to fit complex shapes. Polynomials used for splines are selected to fit smoothly together. The natural cubic spline is conformed by cubic polynomials. It is twice continuously differentiable. Moreover, its second derivative is zero at the endpoints.

Spline interpolation is smoother and more accurate than Lagrange polynomial and others. There are different formulae for calculating splines.

3. The Concept of Regression

Linear regression considers that both variables are linearly related on average. Thus, for a fixed value of x, the actual value of y differs by a random amount from its expected value. Therefore, there is a random error ε, and the equation should be expressed as y = a + bx + ε, where ε is a random variable.

The actual values of a and b are unknown. Therefore, we need to estimate them from the sample data consisting of n observed pairs

Next, the blue line represents the regression model corresponding to the red points. 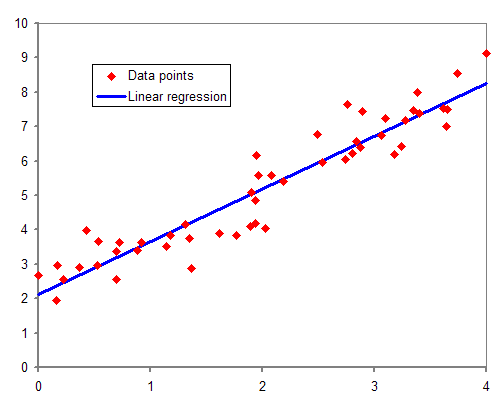 while minimizing the random error. Let’s assume that ε

is the estimated value and ε

is the residual between both values. The least-squares method minimizes the sum of the squared residuals between the observed and the estimated values.

The intercept a is calculated by:

4. Similarities and Differences Between Interpolation and Regression

Let’s look at the similarities and differences between interpolation and regression methods.

4.1. Similarities Between Interpolation and Regression

Interpolation and regression methods present similarities as they both:

4.2. Differences Between Interpolation and Regression

Let’s review the main differences between the interpolation and regression methods:

In this tutorial, we explained the concepts of interpolation and regression. We described their purpose and objectives. Some of the methods used in each field were explained. Finally, their similarities and differences were specified and described.