While the gasoline prices in the United States were low in the 60s, in Europe, fuel was always more expensive. In 1962, Pierre Bézier, an engineer at Renault, and Paul de Casteljau, a mathematician at Citroen, independently developed Bezier curves for fitting smooth curves and surfaces, allowing streamlined bodies and increased fuel efficiency.

In this tutorial, we’ll try to understand the mathematics underlying piecewise polynomial interpolation and explore some cool things we can do with these objects.

2. Thinking About Polynomials as Points or Vectors

Polynomials are a basic means of approximation in all of science and mathematics. Let’s spend a moment reviewing our understanding of polynomials. A polynomial of degree

is simply a function that takes real number

as input and maps it to another real

. However, polynomials in mathematics are special objects – they are vectors in the polynomial space

Let’s unpack this a bit. When we imagine vectors, we’ll see geometric arrows from our undergraduate physics lessons. And that’s totally cool!

We know that, any geometric vector

Think about the collection of all polynomials of degree at most

Polynomials in the set

are isomorphic to geometric vectors in

. These basis polynomials play the role of unit vectors:

Looking at it this way, the polynomial

can be decomposed into three components:

. From high-school math, we realize that, polynomials are also added component-wise.

What points or vectors are to 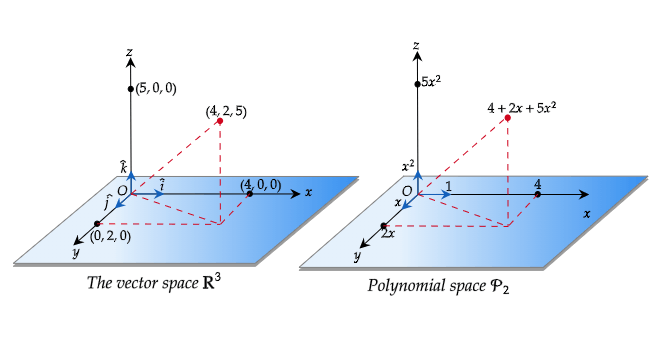 We can choose different basis vectors for

are also basis vectors for

-space. Pick any vector, such as

. It can be expressed as a linear combination of the new basis vectors:

This powerful idea also carries over to the set of polynomials

are another set of basis polynomials for

. Now, if we pick an arbitrary polynomial, such as

, it can be expressed as a linear combination, as follows:

3. The Case for Piecewise Polynomial Interpolation

Let’s review the problem of polynomial interpolation. We have an unknown underlying function or sometimes an expensive function

. The values of the function

are unknown on the interval

, except for a finite subset of data-points:

We’re interested to approximate the unknown or expensive function

From analytic geometry, we know that two points determine a straight line, and three points uniquely determine a parabolic curve of degree

. In general, there is a unique interpolating  polynomial

In contrast, in piecewise polynomial interpolation, we construct a piecewise function consisting of multiple segments. The

th segment, interpolates between the points

Consider the approximation of the function

determined by interpolation on the equidistant grid with

The graph of the degree-

polynomial obtained from the equidistant grid – unlike the graph of

, swings wildly between the grid points. The error from interpolation is large, especially near the endpoints, while near the center

, it is fairly small. Such behavior is typical of equidistant interpolation. This is called the Runge phenomenon: 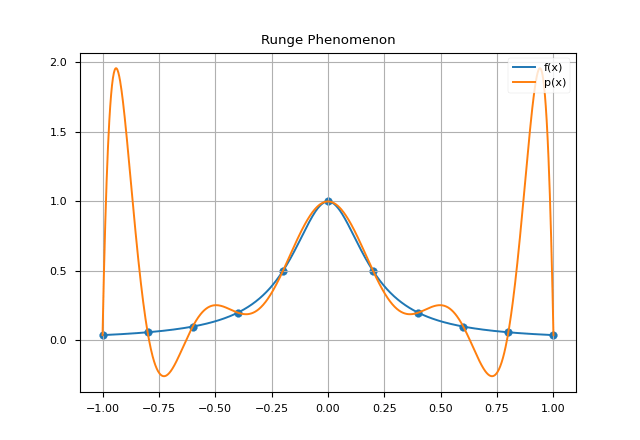 With piecewise polynomials, there is no need to fear equidistant data.

Bézier curves are omniscient in computer graphics and computational geometry. A brief background of how these curves are built follows:

Consider a space-shuttle, that travels in a straight-line from a point

of the space-craft at an arbitrary time

. By the section formula, the coordinates of the point

This is the parametric equation of the motion of the space-craft. The points

control what the straight-line path looks like, so they are called control points.

Assume that, we have

on a straight-line, a green particle

moves along the straight-line joining blue and green particles:

How might we compute the trajectory of the red particle? By a double-application of the section formula, we have:

But, we saw earlier, that

are like unit vectors. All quadratic curves can be generated by choosing different linear combinations of

are called Bernstein basis polynomials. The quadratic curve corresponding to the control points

is called the quadratic Bezier curve and is given by:

The quadratic Bezier curve interpolates between the points

and refer to the on-curve points, as anchor points. In CG editors such as Adobe Illustrator, not all control points are known in advance. The shape of the quadratic curve is controlled by moving around the control points using the Pen tool (Bezier tool) until the curve has the desired shape. Thus, using the Bernstein basis to represent degree

has a direct and intuitive effect on the curve.

When rendering a TrueType font or a car body design, a smooth curve or surface is constructed, by chaining together several Bezier curves or patches.

and the tangent slopes at these two points.

We derive the equation of a Hermite polynomial, by analyzing the physical motion of a particle under certain constraints. Let us imagine a particle that traverses a path given by the parametric equation

denotes time. The first derivative of this function is

The position of the particle at times

are known. The direction of motion of the particle at times

are also known. We have:

In the matrix form, we can write:

In essence, we have managed to find the unique cubic curve determined by two data points

and the slopes at these points

An additional requirement is that the whole spline

times differentiable, and further its derivatives must be continuous. We discuss the consequences of this requirement, at length, further ahead.

We could use straight lines and parabolas for the segments of a spline. However, a polyline has sharp corners, so linear splines are not differentiable at the knot points. A quadratic curve has a constant second derivative. If we use quadratic curves, the curviness of one segment near a knot would not match the curviness of the preceding one. So, the most popular choice for the segments of a spline is cubic curves.

to interpolate between successive knots. A cubic spline interpolant

times differentiable and these derivatives must be continuous. As a crude approximation, we know that a continuous curve is one that can be drawn without lifting the pen from the paper. The individual segments of

are cubic polynomials, so they are continuous themselves. The only consideration is the continuity at the knot points.

For the curve to be continuous at any given knot-point

, regardless. Suppose the left piece is

and the right piece is

. A similar argument follows for the first and second derivatives because we would like those to be continuous.

6.2. Construction of the Cubic Spline

. In line with condition (1), the segment

is a cubic polynomial of the form:

constants. Therefore, we have to determine the values of

The first and second derivatives of

appears often, so we let

in equation (4) and substituting this value in equations (2) and (3) gives, for each

The final relationship is obtained by solving equation (5) first for

and then with a reduction of the index, for

Substituting these values into the equation derived from (6), with the index reduced by one, gives the linear system of equations:

. This system involves only the

as unknowns. The values of

are given respectively by the spacing of the knots

at the knot-points. Once the values of

are determined, it is a simple task to find the remainder of the constants

An open question that arises from the preceding discussion is, whether a solution for the system of linear equations involving the unknowns

exists, and if so, is it unique?

. This results in a nice tridiagonal system of equations

, that can be solved using Gaussian elimination:

A quick numerical example should help crystallize these ideas. Suppose we’re given the data points

to form a cubic spline

to approximate the function

Each interpolation method has its pros and cons.

A natural cubic spline segment assumes the position, the first derivative, and the second derivative from the preceding segment. Thus, the whole curve as well as its first two derivatives are continuous. However, any change in any segment changes the whole curve. Thus, the control is not local.

A B-Spline curve does not have to interpolate any of its control points. Unlike natural splines and Bezier curves, each segment is a weighted sum of only

is the degree of the curve, giving the points local control. Thus, to create a large model with

continuity and local control, we pretty much want to use cubic B-Splines.

The differences between various piecewise techniques is summarized below:

Bezier curves have found use in computer graphics and typography. Cubic Bezier curves are the native curve format in Adobe Postscript fonts. Because, these curves are specified mathematically, they are infinitely scalable.

As with Bezier curves, a Bezier surface is defined by a mesh of control points.

As a small application, here is a rendition of the Utah Teapot in pastel color using Bezier surfaces:

on a grid of

segments, where each segment is a polynomial of degree

derivatives are continuous. A natural cubic spline is a spline of degree

, with the boundary condition that the spline is a straight-line near the first and last data points. It satisfies