In this tutorial, we’ll learn about the meaning of the term ad-hoc in different contexts and then focus on ad-hoc programming.

Generally, we can say that ad-hoc thinking implies deciding our actions on the fly and considering only a particular situation. The opposite is systematic thinking which refers to a structured way of thinking about a problem after considering all its aspects.

For instance, in networking, an ad-hoc network is a system of network elements that are constructed on the fly based on current needs without any prior planning: 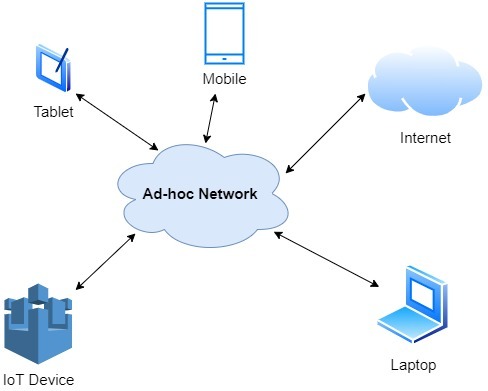 Similarly, in corporate governance, we establish ad-hoc committees to deal with specific and stand-alone problems that don’t fit into the current governance structure.

Moving further, in military setup, we create ad-hoc units in extremely unpredictable situations. Such situations demand quick actions and we need a high degree of cooperation between different units.

Ad-hoc programming means writing code in an unplanned way and for a particular purpose only.

There, the focus is on quick delivery and solving a specific problem rather than detailed planning and developing a generic tool for solving problem instances of the given class.

An example of an ad-hoc database query is a single atomic query with hard-coded search values. So, it has no parameters and isn’t a part of any stored procedure.

For example, let’s say we store the employee data in the table

An ad-hoc query to get all the data on the employee with id 101 is:

A non-ad-hoc approach would be to create a stored procedure to which we supply the employee id as a parameter. As a result, we get a tool we can use for other ids:

Ad-hoc coding means the developer isn’t developing the solution by following a software design plan but jumps straight away to coding without analyzing the problem at hand. Usually, that results in an easy-to-implement solution that is inefficient and covers only a subset of possible input cases.

For instance, let’s say we want to determine if two words are anagrams. By definition, an anagram is a word or a phrase whose letters we can rearrange to obtain another word or a phrase (like ‘break’ and ‘baker’).

characters. Now, an ad-hoc way of solving this is to iterate over all characters of

, comparing each character with all characters of

. If all the letters of

, and vice versa, the two words are anagrams of one another:

However, we that has the time complexity of

If we analyzed the problem first, we’d conclude that we can sort the characters in both words and compare them one by one until we match them all or find a character we can’t match. Thar way, we can solve the problem in

We usually do this when we don’t have a lot of time for testing.

4. When to Use Ad-hoc Programming

We can use an ad-hoc approach for small problems that have changing requirements and for which we need quick solutions. So, to reduce the time to production, we start coding without analysis and a plan.

For instance, let’s say we’re evaluating different methods to convert our search microservice from synchronous to asynchronous modes. Now, we want it to carry search in the background and not block on it. We can achieve that in many ways such as using thread pools, message queues, or subscriber-publisher models. Instead of developing each alternative, we can adopt ad-hoc programming and quickly write a small proof-of-concept code for each approach. Afterward, we do limited testing and choose the best-performing option.

In this article, we have gone through the ad-hoc programming approach in detail. It’s an improvised or impromptu way of solving problems. In essence, ad-hoc coding brings quick results but the code is usually inefficient and focused only on the problem instance at hand, so it doesn’t give us generic and reusable solutions.