In this tutorial, we'll learn about the Model View Controller and Model View Presenter patterns. We'll also discuss the differences between them.

Architectural patterns are general, reusable solutions to commonly occurring problems in software architecture. These have an extensive impact on the codebase.

For example, these impact the software either horizontally or vertically. By horizontally, we mean how to structure the code inside a layer. Conversely, vertically means how a request is processed from outer layers to inner layers and back.

Some of the more common architectural patterns are MVC, MVP, and MVVM.

Design Patterns differ from Architectural Patterns in their scope. They're more localized and have less impact on the codebase. Instead, they impact only a specific section of the codebase. In the next section, we'll talk about why we use these patterns.

3. Why MVC and MVP Patterns

The main idea behind the use of these patterns is the separation of concerns between the business and UI layers. These patterns provide us with features like ease of testing. They also hide data access.

We can say they're more adaptable to change by isolating the major components. However, the biggest drawbacks are adding complexity and the learning curve.

In the MVC pattern, features are divided into three components based on three separate concerns. Firstly, the view is responsible for rendering UI elements. Secondly, the controller responds to UI actions. And the model handles business behaviors and state management.

The diagram below shows the MVC flow of control: 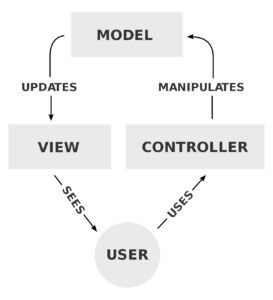 The model represents the whole business logic layer. The view represents the data fetched from the model. In addition, it handles presentation logic. Lastly, the controller handles control flow logic and updates the model.

MVC doesn't specify how the view and the model should be structured internally. Usually, the view layer is implemented in a single class.

However, in that case, a couple of problems can arise:

This pattern separates responsibilities across four components in general. Firstly the view is responsible for rendering UI elements. Secondly, the view interface is used to loosely couple the presenter from its view.

Finally, the presenter interacts with the view and model, and the model is responsible for business behaviors and state management.

In some implementations, the presenter interacts with a service (controller) layer to retrieve/persist the model. The view interface and service layer are commonly used to make writing unit tests for the presenter and the model easier.

The diagram below shows the MVP flow of control: 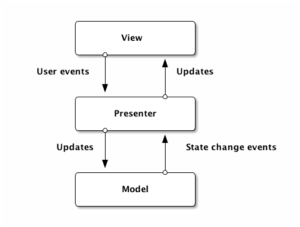 The model is the same as in MVC and contains the business logic. The view is a passive interface that displays data. It sends user actions to the presenter.

The presenter sits between the model and view. It triggers business logic and enables the view to update. It receives data from the model and shows the same in the view. This makes testing the presenter much easier.

Still, there are some problems with MVP:

We'll understand the patterns with a simple example. We've got a product that we need to show and update. These actions are handled differently in MVC and MVP.

We have a simple view class that outputs the product details. The view class for both MVP and MVC are similar:

Let's now define a Product class for MVP that is responsible for the business logic only:

The presenter class in MVP fetches the data from the model and passes it to the view:

For MVC, the difference is that the view will get the data from the model class instead of the presenter class in MVP.

We can define a model class for MVC:

Notice the showProduct() method. This method handles the data passing from model to view. In MVP, this is done in the presenter class, and in MVC, it's done in the model class.

7. Comparison Between MVC and MVP

There aren't a whole lot of differences between MVC and MVP. Both patterns focus on separating responsibility across multiple components, hence, promoting loose coupling of the UI (View) from the business layer (Model).

The major differences are how the patterns are implemented and in some advanced scenarios. Let's look at some of the key differences:

8. Why MVP Has an Edge Over MVC

MVP has the slight upper hand over MVC in that it can break down our application into modules. Thus, we can avoid having to create views constantly. In other words, MVP can help to make our views reusable.

In this tutorial, we've seen the MVC and MVP architectural patterns and a comparison between them.

The example code is available over on GitHub.