Java 8 introduced the Stream API that makes it easy to iterate over collections as streams of data. It's also very easy to create streams that execute in parallel and make use of multiple processor cores.

We might think that it's always faster to divide the work on more cores. But that is often not the case.

Finally, we'll recommend when it makes sense to covert a sequential stream into a parallel one.

The article is an example-heavy introduction of the possibilities and operations offered by the Java 8 Stream API.
Read more →

Learn how to use Parallel Collectors, a library of Java Stream API collectors designed to overcome limitations of standard Parallel Streams.
Read more →

Collect a Java Stream to an Immutable Collection

A stream in Java is simply a wrapper around a data source, allowing us to perform bulk operations on the data in a convenient way.

It doesn't store data or make any changes to the underlying data source. Rather, it adds support for functional-style operations on data pipelines.

By default, any stream operation in Java is processed sequentially, unless explicitly specified as parallel.

Sequential streams use a single thread to process the pipeline:

The output of this sequential stream is predictable. The list elements will always be printed in an ordered sequence:

Any stream in Java can easily be transformed from sequential to parallel.

Parallel streams enable us to execute code in parallel on separate cores. The final result is the combination of each individual outcome.

However, the order of execution is out of our control. It may change every time we run the program:

Parallel streams make use of the fork-join framework and its common pool of worker threads.

The fork-join framework was added to java.util.concurrent in Java 7 to handle task management between multiple threads.

The fork-join framework is in charge of splitting the source data between worker threads and handling callback on task completion.

Let's take a look at an example of calculating a sum of integers in parallel.

We'll make use of the reduce method and add five to the starting sum, instead of starting from zero:

In a sequential stream, the result of this operation would be 15.

But since the reduce operation is handled in parallel, the number five actually gets added up in every worker thread: 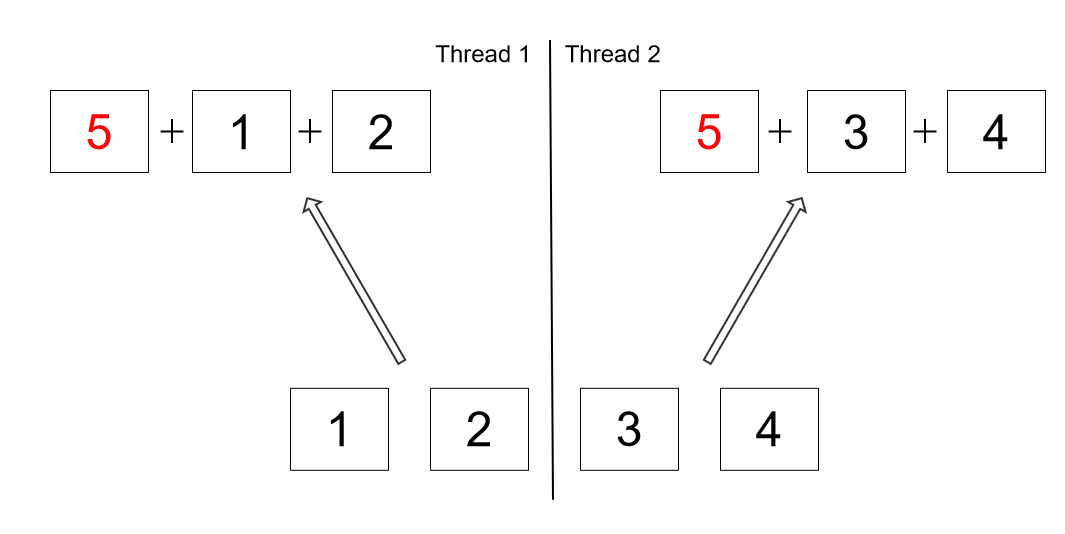 The actual result might differ depending on the number of threads used in the common fork-join pool.

In order to fix this issue, the number five should be added outside of the parallel stream:

Therefore, we need to be careful about which operations can be run in parallel.

However, the API allows us to specify the number of threads it will use by passing a JVM parameter:

It's important to remember that this is a global setting and that it will affect all parallel streams and any other fork-join tasks that use the common pool. We strongly suggest that this parameter is not modified unless we have a very good reason for doing so.

Besides in the default, common thread pool, it's also possible to run a parallel stream in a custom thread pool:

Note that using the common thread pool is recommended by Oracle. We should have a very good reason for running parallel streams in custom thread pools.

Parallel processing may be beneficial to fully utilize multiple cores. But we also need to consider the overhead of managing multiple threads, memory locality, splitting the source and merging the results.

Let's take a look at an example integer stream.

We'll run a benchmark on a sequential and parallel reduction operation:

On this simple sum reduction, converting a sequential stream into a parallel one resulted in worse performance:

The reason behind this is that sometimes the overhead of managing threads, sources and results is a more expensive operation than doing the actual work.

Splitting the data source evenly is a necessary cost to enable parallel execution, but some data sources split better than others.

Let's demonstrate this using an ArrayList and a LinkedList:

We'll run a benchmark on a sequential and parallel reduction operation on the two types of lists:

Our results show that converting a sequential stream into a parallel one brings performance benefits only for an ArrayList:

The reason behind this is that arrays can split cheaply and evenly, while LinkedList has none of these properties. TreeMap and HashSet split better than LinkedList but not as well as arrays.

Every time we split the source for parallel computation, we also need to make sure to combine the results in the end.

Let's run a benchmark on a sequential and parallel stream, with sum and grouping as different merging operations:

Our results show that converting a sequential stream into a parallel one brings performance benefits only for the sum operation:

Modern computers use a sophisticated multilevel cache to keep frequently used data close to the processor. When a linear memory access pattern is detected, the hardware prefetches the next line of data under the assumption that it will probably be needed soon.

Parallelism brings performance benefits when we can keep the processor cores busy doing useful work. Since waiting for cache misses is not useful work, we need to consider the memory bandwidth as a limiting factor.

Let's demonstrate this using two arrays, one using a primitive type and the other using an object data type:

We'll run a benchmark on a sequential and parallel reduction operation on the two arrays:

Our results show that converting a sequential stream into a parallel one brings slightly more performance benefits when using an array of primitives:

An array of primitives brings the best locality possible in Java. In general, the more pointers we have in our data structure, the more pressure we put on the memory to fetch the reference objects. This can have a negative effect on parallelization, as multiple cores simultaneously fetch the data from memory.

Oracle presented a simple model that can help us determine whether parallelism can offer us a performance boost. In the NQ model, N stands for the number of source data elements, while Q represents the amount of computation performed per data element.

Our results show that converting a sequential stream into a parallel one brings slightly more performance benefits when searching a greater number of files:

5. When to Use Parallel Streams

As we've seen, we need to be very considerate when using parallel streams.

Parallelism can bring performance benefits in certain use cases. But parallel streams cannot be considered as a magical performance booster. So, sequential streams should still be used as default during development.

A sequential stream can be converted to a parallel one when we have actual performance requirements. Given those requirements, we should first run a performance measurement and consider parallelism as a possible optimization strategy.

A large amount of data and many computations done per element indicate that parallelism could be a good option.

On the other hand, a small amount of data, unevenly splitting sources, expensive merge operations and poor memory locality indicate a potential problem for parallel execution.

Then we saw how parallel streams do not always bring performance benefits. We considered the overhead of managing multiple threads, memory locality, splitting the source and merging the results. We saw that arrays are a great data source for parallel execution because they bring the best possible locality and can split cheaply and evenly.

Finally, we looked at the NQ model and recommended using parallel streams only when we have actual performance requirements.