In this tutorial, we'll learn how to implement a Ring Buffer in Java.

Ring Buffer (or Circular Buffer) is a bounded circular data structure that is used for buffering data between two or more threads. As we keep writing to a ring buffer, it wraps around as it reaches the end.

A Ring Buffer is implemented using a fixed-size array that wraps around at the boundaries.

Apart from the array, it keeps track of three things:

The mechanics of how a ring buffer handles these requirements vary with the implementation. For instance, the Wikipedia entry on the subject shows a method using four-pointers.

We'll borrow the approach from Disruptor‘s implementation of the ring buffer using sequences.

The first thing we need to know is the capacity – the fixed maximum size of the buffer. Next, we'll use two monotonically increasing sequences:

We can map a sequence to an index in the array by using a mod operation:

The mod operation wraps the sequence around the boundaries to derive a slot in the buffer: 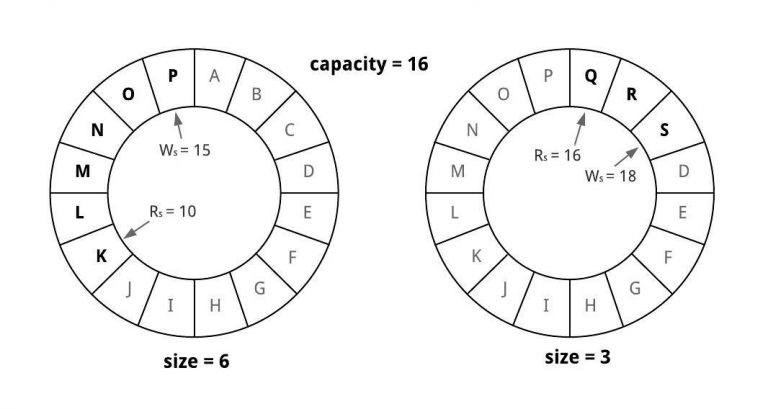 We are pre-incrementing the sequence before inserting an element.

To consume an element we do a post-increment:

In this case, we perform a post-increment on the sequence. Consuming an element doesn't remove it from the buffer – it just stays in the array until it's overwritten.

If the reader can afford to miss the intermediate or old values (for example, a stock price ticker), we can overwrite the data without waiting for it to be consumed. On the other hand, if the reader must consume all the values (like with e-commerce transactions), we should wait (block/busy-wait) until the buffer has a slot available. 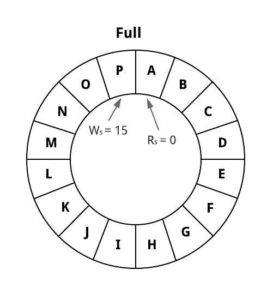 If the write sequence lags behind the read sequence, the buffer is empty: 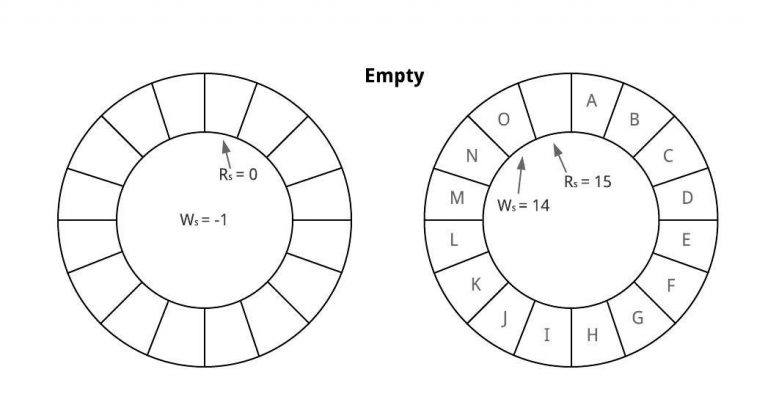 The buffer returns a null value if it's empty.

A ring buffer is an efficient FIFO buffer. It uses a fixed-size array that can be pre-allocated upfront and allows an efficient memory access pattern. All the buffer operations are constant time O(1), including consuming an element, as it doesn't require a shifting of elements.

On the flip side, determining the correct size of the ring buffer is critical. For instance, the write operations may block for a long time if the buffer is under-sized and the reads are slow. We can use dynamic sizing, but it would require moving data around and we'll miss out on most of the advantages discussed above.

Now that we understand how a ring buffer works, let's proceed to implement it in Java.

First, let's define a constructor that initializes the buffer with a predefined capacity:

This will create an empty buffer and initialize the sequence fields as discussed in the previous section.

Next, we'll implement the offer operation that inserts an element into the buffer at the next available slot and returns true on success. It returns false if the buffer can't find an empty slot, that is, we can't overwrite unread values.

So, we're incrementing the write sequence and computing the index in the array for the next available slot. Then, we're writing the data to the buffer and storing the updated write sequence.

Let's try it out:

Here, we're reading the data at the current read sequence by computing the index in the array. Then, we're incrementing the sequence and returning the value, if the buffer is not empty.

Let's test it out:

We've talked about the use of a ring buffer for exchanging data between two or more threads, which is an example of a synchronization problem called the Producer-Consumer problem. In Java, we can solve the producer-consumer problem in various ways using semaphores, bounded queues, ring buffers, etc.

Let's implement a solution based on a ring buffer.

Our implementation of the ring buffer is not thread-safe. Let's make it thread-safe for the simple single-producer and single-consumer case.

We can make the ring buffer concurrent and lock-free in this case by making the sequence fields volatile:

Let's implement a simple producer Runnable that writes to the ring buffer:

The producer thread would wait for an empty slot in a loop (busy-waiting).

We'll implement a consumer Callable that reads from the buffer:

The consumer thread continues without printing if it receives a null value from the buffer.

In this tutorial, we've learned how to implement a Ring Buffer and explored how it can be used to solve the producer-consumer problem.

As usual, the source code for all the examples is available over on GitHub.