User management is very complex, when implemented properly. No surprise here. Not having to roll all of that out manually, but instead integrating a mature, fully-fledged solution - yeah, that makes a lot of sense.
That's basically what Frontegg is - User Management for your application. It's focused on making your app scalable, secure and enjoyable for your users.
From signup to authentication, it supports simple scenarios all the way to complex and custom application logic. Have a look: >> Elegant User Management, Tailor-made for B2B SaaS
November Discount Launch 2022 – Top
We’re finally running a Black Friday launch. All Courses are 30% off until the end of this week:

November Discount Launch 2022 – TEMP TOP (NPI)
We’re finally running a Black Friday launch. All Courses are 30% off until the end of this week:

In the absence of necessary synchronizations, the compiler, runtime, or processors may apply all sorts of optimizations. Even though these optimizations are usually beneficial, sometimes they can cause subtle issues.

Caching and reordering are among those optimizations that may surprise us in concurrent contexts. Java and the JVM provide many ways to control memory order, and the volatile keyword is one of them.

In this tutorial, we'll focus on the foundational but often misunderstood concept in the Java language, the volatile keyword. First, we'll start with some background about how the underlying computer architecture works, and then we'll get familiar with memory order in Java.

As CPUs can carry out many instructions per second, fetching from RAM isn't that ideal for them. To improve this situation, processors are using tricks like Out of Order Execution, Branch Prediction, Speculative Execution, and, of course, Caching.

This is where the following memory hierarchy comes into play: 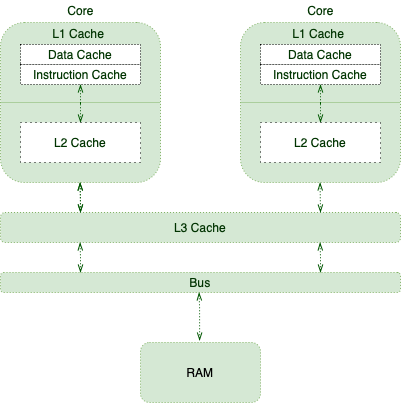 As different cores execute more instructions and manipulate more data, they fill up their caches with more relevant data and instructions. This will improve the overall performance at the expense of introducing cache coherence challenges.

Simply put, we should think twice about what happens when one thread updates a cached value.

3. When to Use volatile

To expand more on cache coherence, we'll borrow an example from the book Java Concurrency in Practice:

The TaskRunner class maintains two simple variables. In its main method, it creates another thread that spins on the ready variable as long as it's false. When the variable becomes true, the thread will simply print the number variable.

Many may expect this program to simply print 42 after a short delay; however, in reality, the delay may be much longer. It may even hang forever or print zero.

The cause of these anomalies is the lack of proper memory visibility and reordering. Let's evaluate them in more detail.

In this simple example, we have two application threads: the main thread and the reader thread. Let's imagine a scenario in which the OS schedules those threads on two different CPU cores, where:

On most modern processors, write requests won't be applied right after they're issued. In fact, processors tend to queue those writes in a special write buffer. After a while, they'll apply those writes to the main memory all at once.

This memory visibility may cause liveness issues in programs relying on visibility.

To make matters even worse, the reader thread may see those writes in an order other than the actual program order. For instance, since we first update the number variable:

We may expect the reader thread to print 42. But it's actually possible to see zero as the printed value.

Reordering is an optimization technique for performance improvements. Interestingly, different components may apply this optimization:

To ensure that updates to variables propagate predictably to other threads, we should apply the volatile modifier to those variables:

This way, we communicate with runtime and processor to not reorder any instruction involving the volatile variable. Also, processors understand that they should flush any updates to these variables right away.

For multithreaded applications, we need to ensure a couple of rules for consistent behavior:

synchronized methods and blocks provide both of the above properties at the cost of application performance.

volatile is quite a useful keyword because it can help ensure the visibility aspect of the data change without providing mutual exclusion. Thus, it's useful in the places where we're ok with multiple threads executing a block of code in parallel, but we need to ensure the visibility property.

Technically speaking, any write to a volatile field happens before every subsequent read of the same field. This is the volatile variable rule of the Java Memory Model (JMM).

Because of the strength of the happens-before memory ordering, sometimes we can piggyback on the visibility properties of another volatile variable. For instance, in our particular example, we just need to mark the ready variable as volatile:

Using these semantics, we can define only a few variables in our class as volatile and optimize the visibility guarantee.

In this article, we explored the volatile keyword, its capabilities, and the improvements made to it, starting with Java 5.

As always, the code examples can be found on GitHub.

November Discount Launch 2022 – Bottom
We’re finally running a Black Friday launch. All Courses are 30% off until the end of this week: