Choosing the right tool for the job can be daunting. In this tutorial, we'll simplify this by comparing three web application load testing tools – Apache JMeter, Gatling, and The Grinder–against a simple REST API.

First, let's quickly review some background on each.

Gatling is a load testing tool that creates test scripts in Scala. Gatling's recorder generates the Scala test scripts, a key feature for Gatling. Check out our Intro to Gatling tutorial for more information.

JMeter is a load testing tool by Apache. It provides a nice GUI that we use can for configuration. A unique feature called logic controllers gives great flexibility to set up tests in the GUI.

Visit our Intro to JMeter tutorial for screenshots and more explanation.

And our final tool, The Grinder, provides a more programming-based scripting engine than the other two and uses Jython. However, The Grinder 3 does have functionality for recording scripts.

The Grinder also differs from the other two tools by allowing for console and agent processes. This functionality provides the ability for an agent process so that the load tests can scale up across multiple servers.  It's specifically advertised as a load test tool built for developers to find deadlocks and slowdowns.

Next, for our test, we need an API. Our API functionality includes:

After this, we query the transactions.

Let's get a quick highlight of the API by viewing some of the method stubs:

Note some of the relationships such as querying for transactions by the reward id and getting the rewards account by customer id. These relationships force some logic and some response parsing for our test scenario creation.

The application under test also uses an H2 in-memory database for persistence.

Luckily, our tools all handle it fairly well, some better than others.

Next, we need test scripts.

To get a fair comparison, we'll perform the same automation steps for each tool:

Let's take a closer look at Step 4 for each tool. And, make sure to check out the sample for all three completed scripts.

For Gatling, familiarity with Scala adds a boon for developers since the Gatling API is robust and contains a lot of features.

Gatling's API takes a builder DSL approach, as we can see in its step 4:

Of particular note is Gatling's support for JSON Path when we need to read and verify an HTTP response. Here, we'll pick up the reward id and save it to Gatling's internal state.

Lastly our configuration for this comparison. The 1000 runs set as a repeat of the entire scenario, atOnceUsers method sets the threads/users:

The entire Scala script is viewable at our Github repo.

JMeter generates an XML file after the GUI configuration. The file contains JMeter specific objects with set properties and their values, for example:

Check out the testname attributes, they can be labeled as we recognize them matching the logical steps above. The ability to add children, variables and dependency steps gives JMeter flexibility as scripting provides. Furthermore, we even set the scope for our variables!

Our configuration for runs and users in JMeter uses ThreadGroups:

View the entire jmx file as a reference. While possible, writing tests in XML as .jmx files do not make sense with a full-featured GUI.

Without the functional programming of Scala and GUI, our Jython script for The Grinder looks pretty basic. Add some system Java classes, and we have a lot fewer lines of code.

However, fewer lines of test setup code are balanced by the need for more string maintenance code such as parsing JSON strings. Also, the HTTPRequest API is slim on functionality.

With The Grinder, we define threads, processes, and runs values in an external properties file:

Our full Jython script for The Grinder will look like this.

To run the tests, we'll use Gatling open-source version 3.4.0 as a standalone tool, JMeter 5.3 and The Grinder version 3.

Gatling requires only that we have JAVA_HOME and GATLING_HOME set. To execute Gatling we use:

JMeter needs a parameter to disable the GUI for the test as prompted when starting the GUI for configuration:

Like Gatling, The Grinder requires that we set JAVA_HOME and GRINDERPATH. However, it needs a couple more properties, too:

As mentioned above, we provide a grinder.properties file for additional configuration such as threads, runs, processes, and console hosts.

Finally, we bootstrap the console and agents with:

Each of the tests ran 1000 runs with 100 users/threads. Let's unpack some of the highlights:

The results show the 3 tools have similar speed, with Gatling slightly edging out the other 2, based on the mean throughput.

Gatling will generate an HTML report at the end of the run, which contains multiple graphs and statistics, for the total run as well as for each request. Here's a snippet of the test result report: 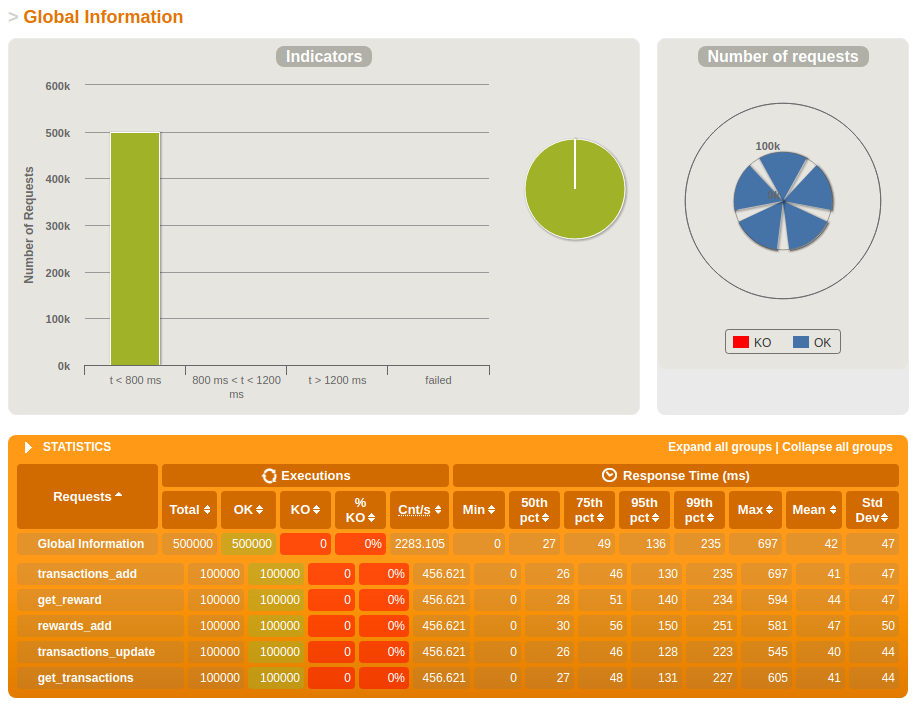 When using JMeter, we can open the GUI after the test run and generate an HTML report based on the log file where we saved the results:

The JMeter HTML report also contains a breakdown of the statistics per request.

Finally, The Grinder Console records statistics for each agent and run:

While The Grinder is high-speed, it comes at the cost of additional development time and less diversity of output data.

Now it's time to take an overall look at each of the load testing tools.

Simply put, if speed and scalability is a need, then use The Grinder.

If great looking interactive graphs help show a performance gain to argue for a change, then use Gatling.

JMeter is the tool for complicated business logic or an integration layer with many message types. As part of the Apache Software Foundation, JMeter provides a mature product and a large community.

In conclusion, we see that the tools have comparable functionalities in some areas while shining in others. The right tool for the right job is colloquial wisdom that works in software development.

Finally, the API and scripts can be found on Github.

Get the Quick Guide and
Take Advantage of JUnit 5
Download the E-book
3 Comments
Oldest
Newest
Inline Feedbacks
View all comments
Comments are closed on this article!
Junit sidebar banner