Performance testing is a testing practice that evaluates a system's responsiveness and stability under a certain workload. There are several types of tests that generally come under performance testing. These include load testing, stress testing, soak testing, spike testing, and several others. All of these have their own specific objectives to attain.

However, one common aspect of any performance testing is to simulate workloads, and tools like Gatling, JMeter, and K6 help us do that. But, before we proceed further, we need an application that we can test for performance.

We'll then develop a simple workload model for the performance testing of this application.

Next, we'll create a simple REST API that provides a random number on request:

There's nothing special about this API — it simply returns a random integer in the range 0 to 999 on every call.

Starting this application is quite simple using the Maven command:

If we need to deploy this simple API into production, we need to ensure that it can handle the anticipated load and still provide the desired quality of service. This is where we need to perform various performance tests. A workload model typically identifies one or more workload profiles to simulate real-life usage.

For a web application with a user interface, defining an appropriate workload model can be quite challenging. But for our simple API, we can make assumptions about the load distribution for the load testing.

Gatling provides Scala DSL to create scenarios to test in a simulation. Let's begin by creating a basic scenario for the API that we created earlier:

Let's discuss the salient points in this basic simulation:

It can be quite complex to create this kind of scenario for more complex applications with a user interface. Thankfully, Gatling comes with another utility, called a recorder. Using this recorder, we can create scenarios by letting it proxy interactions between the browser and the server. It can also consume a HAR (HTTP archive) file to create scenarios.

Now, we're ready to execute our load test. For this, we can place our simulation file “RandomAPILoadTest.scala” in the directory “%GATLING_HOME%/user-file/randomapi/”. Please note that this is not the only way to execute the simulation, but it's certainly one of the easiest ones.

We can start Gatling by running the command:

This will prompt us to choose the simulation to run:

Further, it generates a report in HTML format in the directory “%GATLING_HOME%/results”:

This is just one part of the report that is generated, but we can clearly see the summary of the result. This is quite detailed and easy to follow.

So far, so good. But, if we recall, the purpose of performance testing is to simulate real-life workloads. This can be significantly higher for popular applications than the load we've seen in our trivial case here. If we notice in the test summary, we managed to achieve a throughput of roughly 500 requests/sec. For a real-life application, handling real-life workloads, this can be many times higher!

How do we simulate this kind of workload using any performance tool? Is it really possible to achieve these numbers by injecting load just from a single machine? Perhaps not. Even if the load injection tool can handle much higher loads, the underlying operating system and network have their own limitations.

This is where we have to distribute our load injection over multiple machines. Of course, like any other distributed computing model, this comes with its own share of challenges:

A typical architecture for distributed performance testing uses master and slave nodes to address some of these concerns: 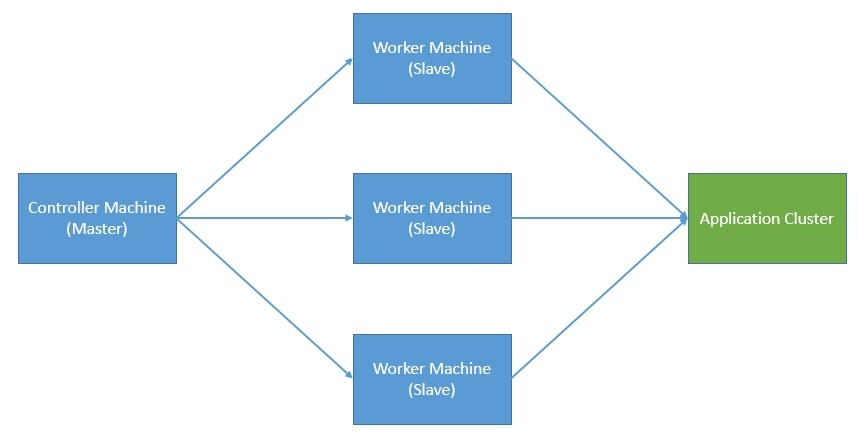 But, here again, what happens if the master breaks down? It's not in the scope of this tutorial to address all the concerns of distributed computing, but we must certainly emphasize their implications while choosing a distributed model for performance testing.

Now that we've understood the need for distributed performance testing, we'll see how we can achieve this using Gatling. The clustering-mode is a built-in feature of Gatling Frontline. However, Frontline is the enterprise version of Gatling and not available as open-source. Frontline has support for deploying injectors on-premises, or on any of the popular cloud vendors.

Nevertheless, it's still possible to achieve this with Gatling open-source. But, we'll have to do most of the heavy lifting ourselves. We'll cover the basic steps to achieve it in this section. Here, we'll use the same simulation that we defined earlier to generate a multiple-machine load.

To achieve a consistent result, we should install the same version of Gatling on all worker machines, with the same configuration on each one. This includes the directory we install Gatling in and the user we create to install it.

Let's see the important environment variables that we need to set on the controller machine:

And let's also define the list of remote worker machines that we'll use to inject the load from:

Some variables point to the Gatling installation directory and other scripts that we need to start the simulation. It also mentions the directory where we wish to generate the reports. We'll see where to use them later on.

It's important to note that we're assuming the machines have a Linux-like environment. But, we can easily adapt the procedure for other platforms like Windows.

Here, we'll copy the same scenario to multiple worker machines that we created earlier. There can be several ways to copy the simulation to a remote host. The simplest way is to use scp for supported hosts. We can also automate this using a shell script:

The above command copies a directory's contents on the local host to a directory on the remote host. For windows users, PuTTY is a better option that also comes with PSCP (PuTTY Secure Copy Protocol). We can use PSCP to transfer files between Windows clients and Windows or Unix servers.

Once we've copied the simulations to the worker machines, we're ready to trigger them. The key to achieving an aggregated number of concurrent users is to execute the simulation on all hosts, almost simultaneously.

We can again automate this step using a shell script:

We're using ssh to trigger the simulation on remote worker machines. The key point to note here is that we're using the “no reports” option (-nr). This is because we're only interested in collecting the logs at this stage, and we'll create the report by combining logs from all worker machines later.

Now, we need to collect the log files generated by simulations on all the worker machines. This is, again, something we can automate using a shell script and execute from the controller machine:

The commands may seem complex for those of us not well versed with shell scripting. But, it's not that complex when we break them into parts. First, we ssh into a remote host, list all the files in the Gatling report directory in reverse chronological order, and take the first file.

Then, we copy the selected logfile from the remote host to the controller machine and rename it to append the hostname. This is important, as we'll have multiple log files with the same name from different hosts.

Lastly, we have to generate a report from all the log files collected from simulations executed on different worker machines. Thankfully, Gatling does all the heavy lifting here:

We copy all the log files into the standard Gatling report directory and execute the Gating command to generate the report. This assumes that we have Gatling installed on the controller machine as well. The final report is similar to what we've seen earlier:

Here, we don’t even realize that the load was actually injected from multiple machines! We can clearly see that the number of requests almost tripled when we used three worker machines. In real-life scenarios, the scaling would not be this perfectly linear, though!

Typically, the limiting factors to scale load injection on a machine comes from the underlying operating system or network. There are certain things we can optimize to make this better. In Linux-like environments, the number of concurrent users that a load injector can spawn is generally limited by the open files limit. We can consider increasing it using the ulimit command.

Finally, the scenarios that we include in our simulation should be resilient, as we should not assume a positive response always under load. Hence, we should be careful and defensive in writing our assertions on the response. Also, we should keep the number of assertions to the bare minimum to save our effort for increasing the throughput.

In this tutorial, we went through the basics of executing a distributed performance test with Gatling. We created a simple application to test, developed a simple simulation in Gatling, and then understood how we could execute this from multiple machines.

In the process, we also understood the need for distributed performance testing and the best practices related to it.