The Travelling Salesman Problem (TSP) is a very well known problem in theoretical computer science and operations research. The standard version of TSP is a hard problem to solve and belongs to the NP-Hard class.

In the TSP, given a set of cities and the distance between each pair of cities, a salesman needs to choose the shortest path to visit every city exactly once and return to the city from where he started.

Let’s take an example to understand the TSP in more detail: 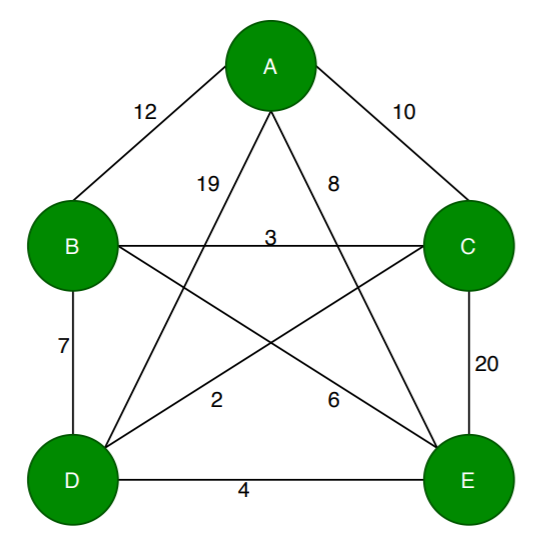 Here, the nodes represent cities, and the values in each edge denote the distance between one city to another. Let’s assume a salesman starts the journey from the city

. According to TSP, the salesman needs to travel all the cities exactly once and get back to the city

How to find out such a path? Let’s discuss an algorithm to solve the TSP problem.

Let’s first see the pseudocode of the dynamic approach of TSP, then we’ll discuss the steps in detail:

In this algorithm, we take a subset

of the required cities needs to be visited, distance among the cities

as inputs. Each city is identified by unique city id like

Initially, all cities are unvisited, and the visit starts from the city

. We assume that the initial travelling cost is equal to

On the other hand, if the number of cities is greater than

, then we’ll calculate the distance from the current city to the nearest city, and the minimum distance among the remaining cities is calculated recursively.

Finally, the algorithm returns the minimum distance as a TSP solution.

Here we use a dynamic approach to calculate the cost function

. Using recursive calls, we calculate the cost function for each subset of the original problem.

In the dynamic algorithm for TSP, the number of possible subsets can be at most

. Each subset can be solved in

times. Therefore, the time complexity of this algorithm would be

TSP is a popular NP-Hard problem, but depending on the size of the input cities, it is possible to find an optimal or a near-optimal solution using various algorithms.

In this tutorial, we’ve discussed a dynamic programming approach for solving TSP. We also presented the time complexity of the given algorithm.