In this tutorial, we’ll discuss the Floyd-Warshall Algorithm, and then we’ll analyze its time complexity.

The Floyd-Warshall algorithm is a popular algorithm for finding the shortest path for each vertex pair in a weighted directed graph.

In all pair shortest path problem, we need to find out all the shortest paths from each vertex to all other vertices in the graph.

Now, let’s jump into the algorithm:

as an input. And first, we construct a graph matrix from the given graph. This matrix includes the edge weights in the graph.

in the diagonal positions in the matrix. The rest of the positions are filled with the respective edge weights from the input graph.

The number of iterations is equal to the cardinality of the vertex set. The algorithm returns the shortest distance from each vertex to another in the given graph.

Let’s run the Floyd-Warshall algorithm on a weighted directed graph: 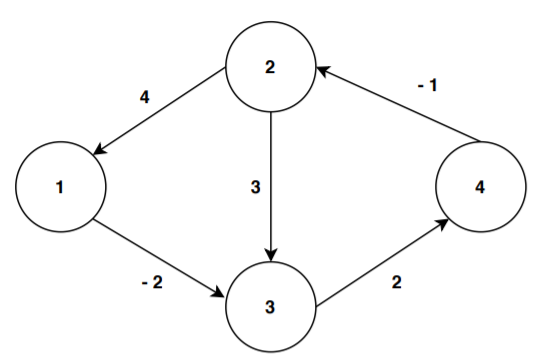 At first, we construct a graph matrix from the input graph. Next, we insert

to the diagonal positions in the matrix, and the rest of the positions will be filled with the edge weights from the input graph:

Now, we’re ready to start the iteration. The cardinality of the vertex set is

As the loop values don’t satisfy the condition, there will be no update in the matrix.

Thus, there will be no changes in the matrix. In this way, we’ll continue and check all pair of vertices.

Let’s fast-forward to some values that will satisfy the distance condition.

Because of that, we’ll compute a new distance:

Hence, the condition satisfies for the vertex pair

. At first, the distance between the vertex

. However, we found a new shortest distance

here. Because of that, we update the matrix with this new shortest path distance:

Let’s take another set of values for the three nested loops such that the loop values satisfy the distance condition given in the algorithm; k=2, i= 4, j= 1:

As the condition satisfies, we’ll calculate a new distance calculation:

Therefore, we update the matrix now with this new value:

Similarly, we continues and checks for different loop values. Finally, after the algorithm terminates, we’ll get the output matrix containing all pair shortest distances:

First, we inserted the edge weights into the matrix. We do this using a for loop that visits all the vertices of the graph. This can be performed in

Next, we’ve got three nested loops, each of which goes from one to the total number of vertices in the graph. Hence, the total time complexity of this algorithm is

To summarize, in this tutorial, we’ve discussed the Floyd-Warshall algorithm to find all pair shortest distance in a weighted directed graph.

Furthermore, we’ve also presented an example and time complexity analysis of the algorithm.