In computer science, there exist several famous unresolved problems, and

is one of the most studied ones. Until now, the answer to that problem is mainly “no”. And, this is accepted by the majority of the academic world. We probably wonder why this problem is still not resolved.

In this tutorial, we explain the details of this academic problem.  Moreover, we also show both

problems. Then, we also add definitions of

. And in the end, hopefully, we would have a better understanding of why

is still an open problem.

which is “Polynomial” time and

which “Non-deterministic Polynomial” time. There are also

sets, which we use to express more sophisticated problems. In the case of rating from easy to hard, we might label these as “easy”, “medium”, “hard”, and finally “hardest”:

And we can visualize their relationship, too: 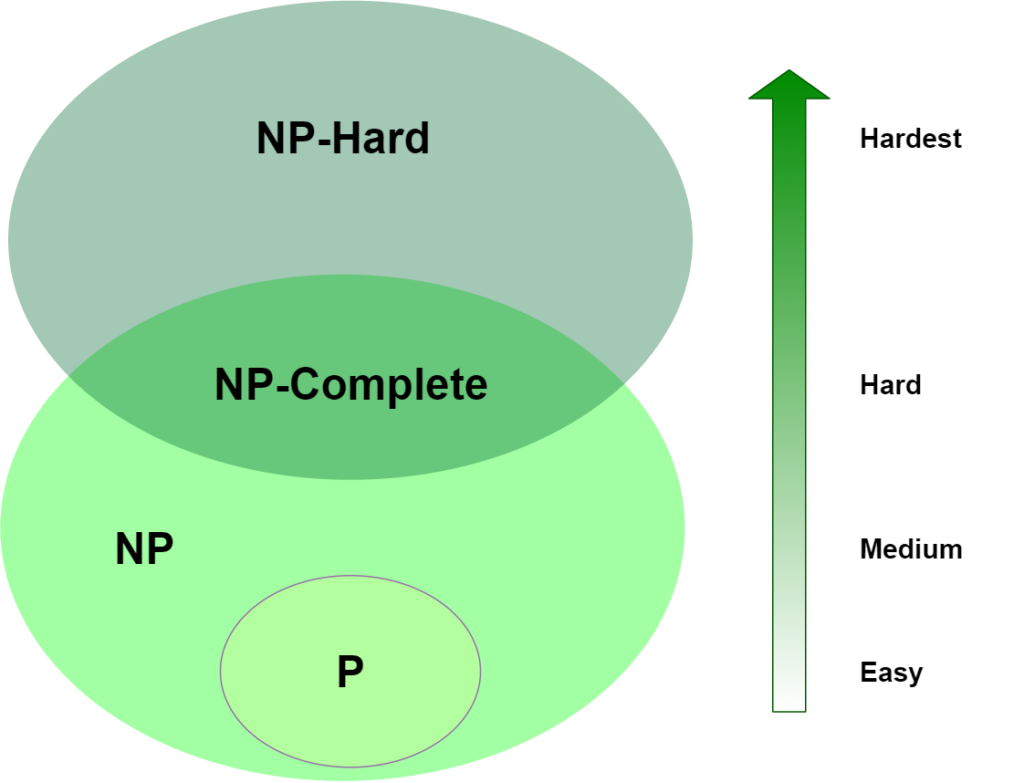 Using the diagram, we assume that

are not the same set, or, in other words, we assume that

. This is our apparently-true, but yet-unproven assertion. Of course, another interesting aspect of this diagram is that we’ve got some overlap between

when the problem belongs to both of these sets.

to “easy”, “medium”, “hard” and “hardest”, but how does we place a given algorithm in each category? For that, we’ll need to get a bit more formal through the next section.

Through the rest of the article, we generally prefer not to use units like “seconds” or “milliseconds”. Instead, we prefer proportional expressions like

, using Big-O notation. Those mathematical expressions give us a clue about the algorithmic complexity of a problem.

is a constant and

is the input size. The size of

also depends on the problem definition. For example, using a number set with a size of

, the search problem has an average complexity between linear-time and logarithmic-time depending on the data structure in use.

The first set of problems are polynomial algorithms that we can solve in polynomial time, like logarithmic, linear or quadratic time. If an algorithm is polynomial, we can formally define its time complexity as:

is input size. In general, for polynomial-time algorithms

is expected to be less than

. Many algorithms complete in polynomial time:

As we talked about earlier, all of these have a complexity of

, and that fact places them all in

. Of course, we don’t always have just one input,

. But, so long as each input is a polynomial, multiplying them will still be a polynomial. For example, in graphs, we use

for vertices, which gives us

for Bellman-Ford’s shortest path algorithm. Even if the size of the edge set is

, the time complexity is still a polynomial,

We can’t always pinpoint the Big-O for an algorithm. Outside of Big-O, we can think about the problem description. Consider, for example, the game of checkers. What is the complexity of determining the optimal move on a given turn? If we constrain the size of the board to

, then this is believed to be a polynomial-time problem, placing it in

board, it’s no longer in

. In this case, how we constrain the search space affects where we place it. Similarly, the Hamiltonian-Path problem has polynomial-time solutions for only some types of input graphs.

Or another example is the stable roommate problem; it’s polynomial-time to match without a tie, but not when ties are allowed or when we include roommate preferences like married couples. (These variants are actually

, which we’ll cover in a moment.) Still another factor to consider is the size of

. If the input size is going to be near

, then the algorithm is going to behave more like an exponential.

is the input size.

is a function of exponential-time when at least

in this set of problems. There are several algorithms that fit this description. Among them are:

Both of these have two important characteristics: Their complexity is

and their results can be verified in polynomial time. Those two facts place them all in

, that is, the set of “Non-deterministic Polynomial” algorithms. Now, formally, we also state that these problems must be decision problems – have a yes or no answer – though note that practically speaking, all function problems can be transformed into decision problems. This distinction helps us to nail down what we mean by “verified”.

To speak precisely, then, an algorithm is in

, there’s no proof of whether they are in

, but they have another property that makes them more complex compared to

Let’s continue with that difference in the next section.

The next set is very similar to the previous set. Taking a look at the diagram, all of these all belong to

, but are among the hardest in the set. Right now, there are more than 3000 of these problems, and the theoretical computer science community populates the list quickly. What makes them different from other

problems is a useful distinction called completeness. For any

problem that’s complete, there exists a polynomial-time algorithm that can transform the problem into any other

As stated already, there are numerous

problems proven to be complete. Among them are:

Curiously, what they have in common, aside from being in

, is that each can be reduced into the other in polynomial time. These facts together place them in

. The major and primary work of

belongs to Karp. And his

problems are fundamental to this theoretical computer science topics. These works are founded on the Cook-Levin theorem and prove that the Satisfiability (SAT) problem is

These algorithms have a property similar to ones in

– they can all be reduced to any problem in

. Because of that, these are in

and are at least as hard as any other problem in

. A problem can be both in

, which is another aspect of being 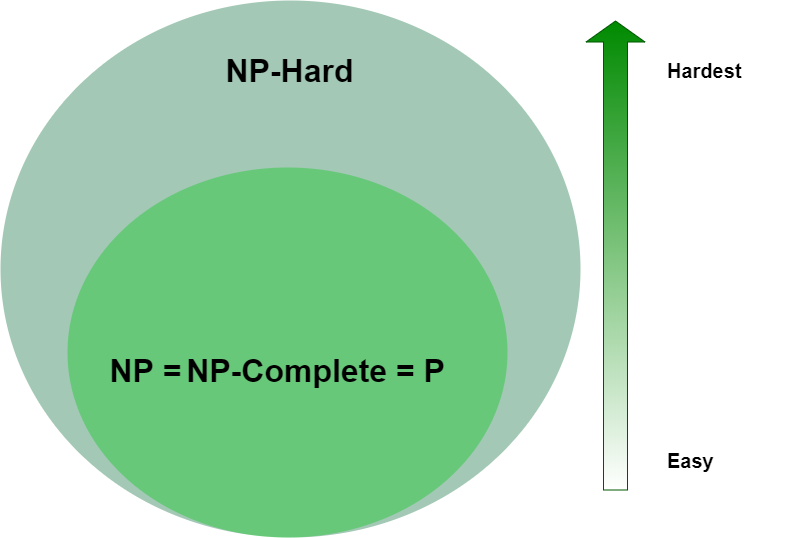 It’s an interesting problem because it would mean, for one, that any

problem can be solved in polynomial time. So far, proving that

as proven elusive. Because of the intrigue of this problem, it’s one of the Millennium Prize Problems for which there is a $1,000,000 prize.

For our definitions, we assumed that

may be possible. If it were so, aside from

problems being solvable in polynomial time, certain algorithms in

would also dramatically simplify. For example, if their verifier is

, then it follows that they must also be solvable in polynomial time, moving them into

We can conclude that

means a radical change in computer science and even in the real-world scenarios. Currently, some security algorithms have the basis of being a requirement of too long calculation time. Many encryption schemes and algorithms in cryptography are based on the number factorization which the best-known algorithm with exponential complexity. If we find a polynomial-time algorithm, these algorithms become vulnerable to attacks.

Within this article, we have an introduction to a famous problem in computer science. Through the article, we focused on the different problem sets;

. We also provided a good starting point for future studies and what-if scenarios when

. Briefly after reading, we can conclude a generalized classification as follows:

As a final note, if

has proof in the future, humankind has to construct a new way of security aspects of the computer era. When this happens, there has to be another complexity level to identify new hardness levels than we have currently.