plane that we’d like to connect to draw a closed shape. First, we’d need to sort those points.

In our tutorial, we’re going to walk through a method that can sort

Given a set of 2D points (each represented by

coordinates), we would like to sort these points in clockwise order. To begin, we need to view these points around a center point. This center-point can be at the

coordinates, or it could be at any arbitrary point on the 2D plane. Based on the requirements, we can choose which center point is better.

In our scenario, we’ll estimate the center point as the mean of the given points. This is shown in the following figure where we have 3 points sorted around the center point: 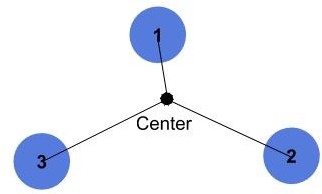 There are a few points to note here. First, we aren’t estimating the convex hull (the convex that encapsulates all points), but we’d like to find a closed path that goes through all the points in a clockwise order. Thus, it is fine to sort some points in the following way: 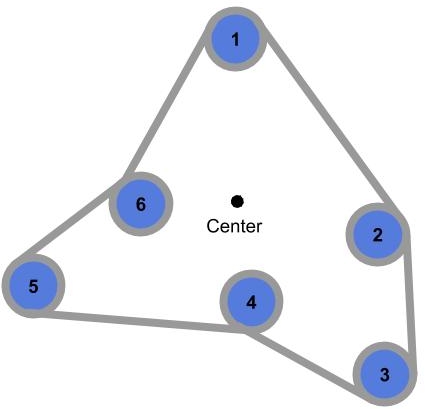 However, for the same set of points, if we estimate the convex hull, we’ll only include points 1, 2, 3, and 5 as follows: 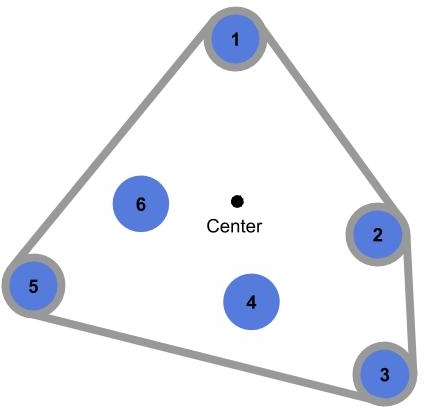 One last thing to note is that we aren’t going to cover the exceptional case where all points lie on a straight line.

Let’s walk through an example given the set of points 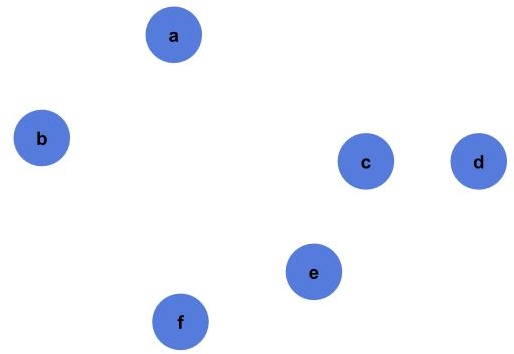 The first thing we need to do is to find the center point of the given points: 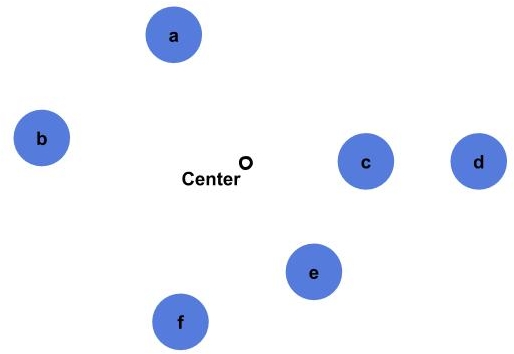 Then we estimate the angle between each point and the center: 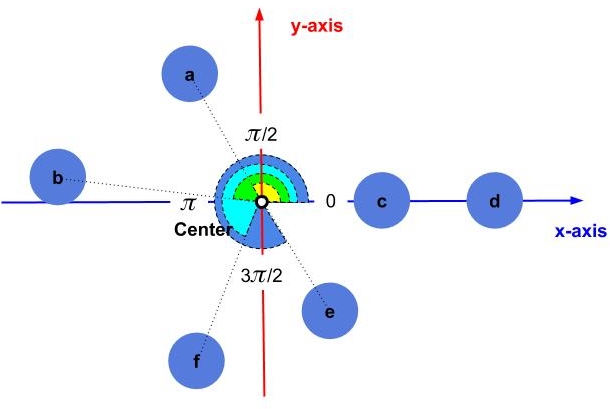 Since we need to sort the points in clockwise order, the first point will be point

as it falls in the

quadrant. Next will be point

as it falls in the

comes first as it is closer to

is next. Finally, we have points

quadrant, but both are at angle

. In this tutorial, we decided to break the tie by the distance from the center: 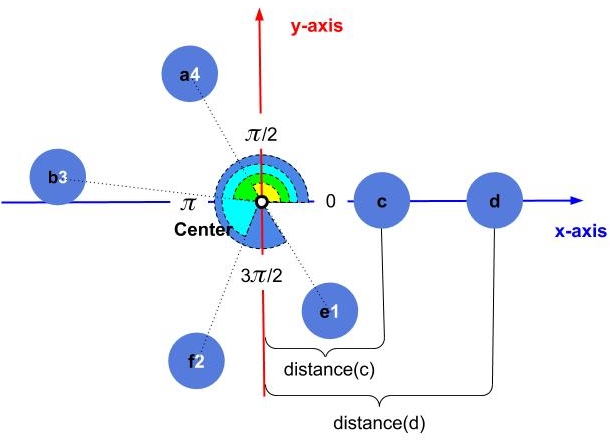 is closer to the center than point

is the last point in our order: 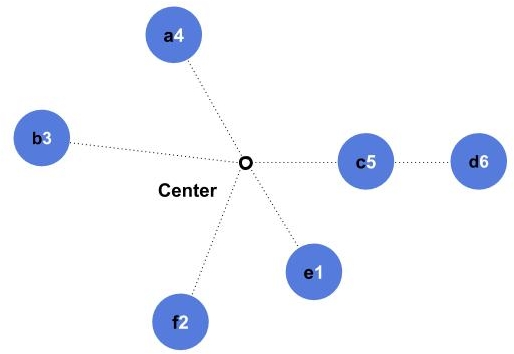 The final order in the given example will be

Now let’s see more details on how to design the algorithm.

From a high-level perspective, we have an array of points that we need to sort according to some criteria. We can use any sorting algorithm and provide the right comparator to do the job; however, in our case, we need to add some pre- and post-processing steps.

Next, we call our sorting algorithm (like Quicksort or Bubble-Sort) with our

function to get the points sorted according to our defined criteria. Finally, we re-add the center point to the sorted points to translate them back to the original location.

Let’s start with the high-level idea illustrated in the following flow-chart:

Now let’s dig deeper inside the

function. In this function, we get two points as inputs, and we need to return

if the first point comes before the second point, and

otherwise. If we assume we have another function telling us the angle of any point relative to some center point from

The following flow-chart illustrates this idea. The center point is

because we translated all of our points around the center point in the pre-processing step: 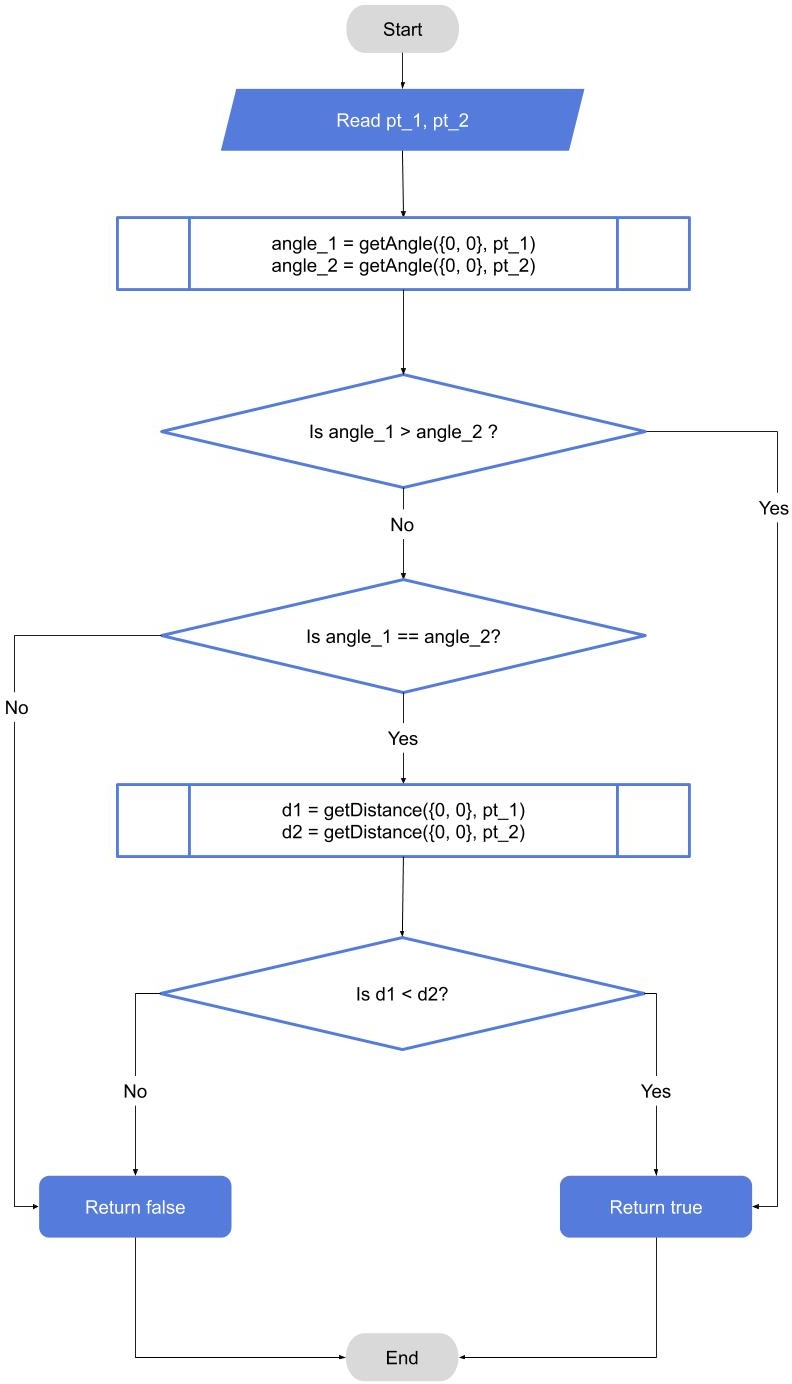 The details for the

functions are going to be in the pseudocode.

Now let’s look at simple pseudocode for our algorithm. The pseudocode starts with the general algorithm of finding the center point, and then translates all the points to this center. Next we call the sort function with our custom

function. Finally, we move the sorted points back to the original locations:

function then calls the

functions for each pair of points. The function returns

Now let’s see how to estimate the angle. We’re going to assume that we’re using a function like

that exists in many programming languages. This function estimates the angle using inverse tan based on the value of

, and returns the result in the range

. In our case, we need the angle to be between

. One way to do this is if the angle is less than

. Thus, the final value of the angle will be in the desired range from

As for the distance, we can use simple Euclidean distance as the square root (

) of the sum of the square of the differences for all axes. In practice, we can get rid of the square root step and return the squared distance (in our scenario the distance is always between some point and the center point):

. The reason is that we only have loops of complexity

for pre- and post-processing. Then we call the sorting algorithm with our custom compare function.

In this article, we presented a method to sort points in clockwise order. The idea depends on any general sorting algorithm with some pre- and post-processing steps. We illustrated the algorithm through an example, flow-charts, and pseudocode. Finally, we provided a simple complexity analysis of space and time complexities for the presented method.