An efficient sorting algorithm plays an important role in reducing the complexity of a problem. Sorting algorithms are used in various problems in computer science to rearrange the elements in an input array or list in ascending or descending order.

Quicksort is a highly efficient sorting that is based on the Divide-and-Conquer method.

In this tutorial, we’ll discuss the worst-case scenario for the Quicksort algorithm in detail.

2. When Does the Worst Case of Quicksort Occur?

Except for the above two cases, there is a special case when all the elements in the given input array are the same. In such a scenario, the pivot element can’t divide the input array into two and the time complexity of Quicksort increases significantly.

Let’s assume that we choose a pivot element in such a way that it gives the most unbalanced partitions possible: 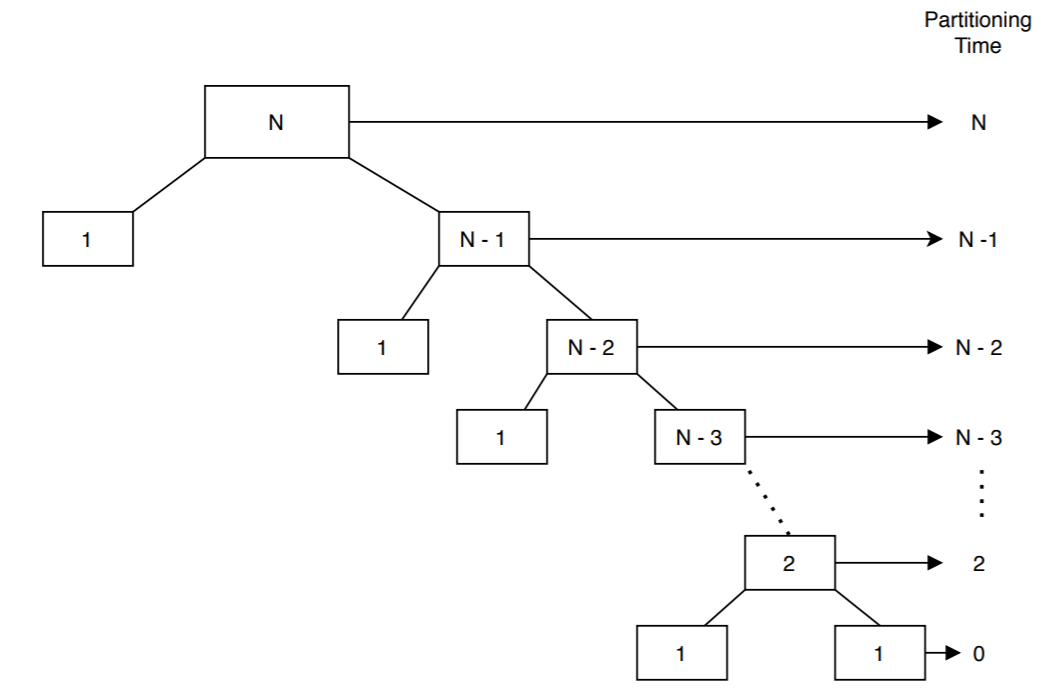 All the numbers in the box denote the size of the arrays or the subarrays.

times to perform the partition step on the input array.

Therefore, the time complexity of the Quicksort algorithm in worst case is

Alternatively, we can create a recurrence relation for computing it.

In the worst case, after the first partition, one array will have

element and the other one will have

denotes the time complexity to sort

elements in the worst case:

Again for the base case when

, we don’t need to sort anything. Hence, the sorting time is

We can avoid the worst-case in Quicksort by choosing an appropriate pivot element. In this section, we’ll discuss different ways to choose a pivot element.

The first approach for the selection of a pivot element would be to pick it from the middle of the array. In this way, we can divide the input array into two subarrays of an almost equal number of elements in it.

In some cases selection of random pivot elements is a good choice. This variant of Quicksort is known as the randomized Quicksort algorithm.

Another approach to select a pivot element is to take the median of three pivot candidates. In this case, we’ll first select the leftmost, middle, and rightmost element from the input array. Then we’ll arrange them to the left partition, pivot element, and right partition.

Quicksort is considered one of the best sorting algorithms in terms of efficiency. The average case time complexity of Quicksort is

which is the same as Merge Sort. Even with a large input array, it performs very well. It provides high performance and is comparatively easy to code. It doesn’t require any additional memory.

In this tutorial, we discussed the different worst-case scenarios of Quicksort and presented the time complexity analysis for it.