In this tutorial, we’ll explore the basics of reinforcement learning and how we can use neural networks within it. In addition, we’ll develop a small application to go through fundamental concepts.

Before we begin, let’s try to understand what we mean by reinforcement learning and neural networks.

Machine learning refers to a class of algorithms that promises to improve automatically based on experience. More generally, machine learning is a part of artificial intelligence, which is the study of intelligent agents founded in 1956.

We can broadly divide machine learning into three categories depending upon the feedback available for the algorithm to learn over time:

Neural networks consist of many simple processing nodes that are interconnected and loosely based on how a human brain works. We typically arrange these nodes in layers and assign weights to the connections between them. The objective is to learn these weights through several iterations of feed-forward and backward propagation of training data through the network.

Reinforcement learning is about an autonomous agent taking suitable actions to maximize rewards in a particular environment. Over time, the agent learns from its experiences and tries to adopt the best possible behavior.

In the case of reinforcement learning, we limit human interaction to changing the environment states, and the system of rewards and penalties. This setup is known as the Markov Decision Process.

To understand this better, let’s take the example of training a pet. We can consider the pet as an autonomous agent. If we’re trying to train the pet in our living room, that can be considered as the environment:

We can throw a ball and expect the pet to run and fetch it. Here, throwing the ball represents a state that the environment presents, and running to fetch it represents an action that the pet may take. Finally, we may reward the pet in the form of a pat on the back or penalize the pet by ignoring it.

We can issue rewards immediately or delay them to some point in the future. Of course, a future reward is often less valuable in the present and hence discounted.

There are generally two types of reinforcement learning:

The objective of reinforcement learning is to maximize this cumulative reward, which we also know as value. The strategy that an agent follows is known as policy, and the policy that maximizes the value is known as an optimal policy.

Formally, the notion of value in reinforcement learning is presented as a value function:

Here, the function takes into account the discounted future rewards starting in a state under a given policy. We also know this as the state-value function of this policy. The equation on the right side is what we call a Bellman equation, which is associated with optimality conditions in dynamic programming.

Q-value is a measure of the long-term return for an agent in a state under a policy, but it also takes into account the action an agent takes in that state. The basic idea is to capture the fact that the same action in different states can bare different rewards:

Here the function creates a map of the state and action pairs to the rewards. We also know this as the action-value function for a policy.

Q-value is a measure we use in Q-learning, which is one of the main approaches we use toward model-free reinforcement learning. Q-learning emphasizes how useful a given action is in gaining some future reward in a state under a policy.

Now that we’ve covered enough basics, we should be able to attempt to implement reinforcement learning. We’ll be implementing the q-learning algorithm for this tutorial.

OpenAI is a company that has developed several tools and technologies for standardization and wider adoption of artificial intelligence. The gym is a toolkit from OpenAI that helps us evaluate and compare reinforcement learning algorithms.

Basically, the gym is a collection of test environments with a shared interface written in Python. We can consider these environments as a game, the FrozenLake environment, for instance. FrozenLake is a simple game that controls the movement of the agent in a grid world:

The rules of this game are:

We’ll be using this environment to test the reinforcement learning algorithm we’re going to develop in the subsequent sections.

Before we start implementing the q-learning algorithm, it’s worthwhile to understand what a typical q-learning process looks like:

The q-values are stored and updated in a q-table, which has dimensions matching the number of actions and states in the environment. This table is initialized with zeros at the beginning of the process.

As evident from the diagram above, the q-learning process begins with choosing an action by consulting the q-table. On performing the chosen action, we receive a reward from the environment and update the q-table with the new q-value. We repeat this for several iterations to get a reasonable q-table.

We saw earlier that when the process starts, the q-table is all zeros. Hence the action an agent chooses cannot be based on the q-table, it has to be random. However, as the q-table starts to get updated, the agent makes the selection of the action based on the maximum q-value for a state.

This may potentially lock the agent in repeating some of the initial decisions that were not optimal. Essentially, the agent moves from exploration to exploitation of the environment too soon. Therefore, it is necessary to introduce an action selection policy called the

Here we sample a random number, and if it happens to be less than

, the action is chosen randomly. This allows the agent random exploration, which can be very useful, especially in the initial iterations. Of course, we slowly decay the impact of this parameter to lean on the side of exploitation as learning matures.

We have already seen that the calculation of q-value follows a Bellman equation, but how does it really work? Let’s understand different parts of this equation a little better:

So basically, we keep adding a temporal difference to the current q-value for a state and action pair. There are two important parameters here which are important to choose wisely:

Now let’s put all the steps we’ve discussed so far in the form of a program to accomplish the q-learning algorithm. We’ll use Python to develop a basic example for demonstration, primarily because Python has a rich ecosystem of libraries for data manipulation and machine learning.

Next let’s get our test environment, FrozenLake, as discussed earlier:

Now we need to set some learning parameters like the discount factor, ϵ-value and its decay parameter, learning rate, and the number of episodes to run for:

The values we chose here are based on experience and must be treated as hyperparameters for tuning. As a last bit of preparation, we need to initialize our q-table:

Now we’re ready to start the learning process for our agent in the chosen environment:

Let’s understand what is happening in this block of code:

Following the above algorithm a sufficient number of times, we’ll arrive at a q-table that will be able to predict the actions in a game quite efficiently. This is the objective in a q-learning algorithm where a feedback loop at every step is used to enrich the experience and benefit from it.

This is where we can use neural networks to predict q-values for actions in a given state instead of using a table. Instead of initializing and updating a q-table in the q-learning process, we’ll initialize and train a neural network model.

As we’ve discussed, a neural network consists of several processing nodes fashioned into multiple layers that are typically densely connected.

These layers comprise the following:

Let’s see a simple neural network architecture for the test environment we used earlier in the q-learning algorithm: 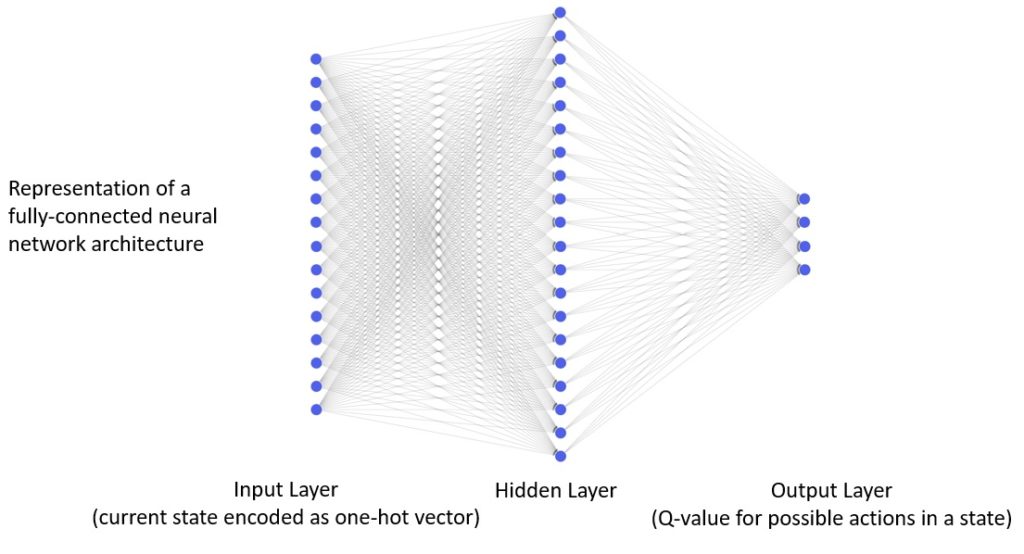 A processing node in the neural network generates the output based on the inputs it receives from the preceding nodes, weights, and biases it learns:

As we can see in the processing node above, it also makes use of an activation function. One of the most important reasons this is necessary is that it provides non-linearity to the output, which is otherwise fairly linear. This non-linearity makes the neural network able to learn complex and real-world patterns.

5.3. The Loss Function and Optimizer

Neural networks work by iteratively updating the weights and biases of the model to reduce the error in predictions it’s able to make. Therefore, it’s necessary for us to be able to calculate the model error at any point in time. The loss function enables us to do that. Typically, we employ loss functions like cross-entropy and mean-squared-error in neural network models.

The mean-squared-error loss function measures the square value of the difference between the prediction and the target:

The intuition behind calculating the loss function is to take the feedback backward through the network and update the weights. We call this backpropagation, and we can use several algorithms to achieve it, beginning with the classical stochastic gradient descent. Some algorithms are computationally more efficient with lesser memory requirements, like Adam (derived from Adaptive Moment Estimation). We’ll use this in the model for our algorithm.

5.4. Setting up Q-learning with Neural Network

Keras is a higher-level library that works over a data-flow computation library like Tensorflow or Theano. We’ll use Keras to build the q-learning algorithm with the neural network.

The overall structure of the q-learning algorithm will remain the same as we’ve implemented before. The key changes will be in using a neural network model instead of a q-table, and how we update it every step.

Then we’ll get our test environment, FrozenLake, for running the algorithm:

Next, we’ll set up some necessary hyperparameters with sensible defaults:

There is nothing new here; however, the next step is to set up the neural network model in Keras. We can also appreciate how simply Keras defines a complex model like this:

This is exactly what we discussed earlier on choosing the neural network architecture for such jobs. The main thing to note is the use of Keras class Sequential, which allows us to stack layers one after another in our model.

Now that we’ve performed all the necessary set up, we’re ready to implement our q-learning algorithm with the neural network:

The algorithm is quite similar to what we implemented earlier; therefore, we’ll only discuss the salient changes neural networks introduce:

In this article, we discussed the basics of reinforcement learning. We explored the q-learning algorithm in particular detail.

Finally, we examined neural networks and how they are beneficial in reinforcement learning.