In this tutorial, we’ll present the key differences between a port and a socket.

Port is a part of the transport layer and helps in network communication. A port is a logical identifier assigned to a process in order to identify that process uniquely in a network system. When two network devices communicate, they do so by sending packets to each other. Each packet received by a receiver device contains a port number that uniquely identifies the process where the packet needs to be sent.

Let’s look at an example. A client computer is requesting the server for a virtual connection with the port number

. Telnet is a well-known protocol for establishing a remote connection over a TCP/IP and it uses port

. Hence, the server acknowledges the request from the client and start a telnet connection: 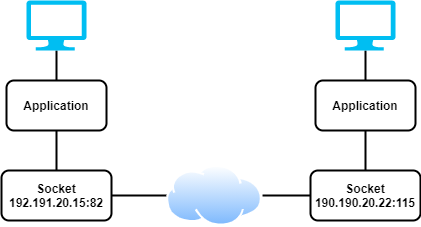 Sockets can be classified into three categories: stream, datagram, and raw socket. Stream sockets use connection-oriented network point to send and receive data. This type of sockets generally utilizes TCP to permit processes to communicate with each other.

Datagram sockets use connectionless network protocols like UDP to allow process communication. Raw sockets are datagram oriented and allow the processes to use ICMP for communication purpose.

We now know the basics of port and socket. Let’s see the differences between a port and a socket:

In this tutorial, we learned about ports and sockets in networking. We also presented some key differences between a port and a socket.