The operating system is probably the most relevant software running on our computers. Operating systems are responsible for managing both the computer hardware and software. So, they provide a series of services for the computer users, enabling them to accomplish different tasks.

Among these services, we can cite, for example, the interface provided for the users to interact with the computer, the resource allocation, the networked communication, and others.

Of course, each one of the services provided by an operating system requires specific resources and conditions to execute as expected. Moreover, services cooperate to achieve a common objective.

In this tutorial, we’ll see the essential services of an operating system, focusing on how they work and cooperate with other services.

In summary, an operating system provides an environment that abstracts and manages hardware resources and executes multiple software programs.

We can divide an operational system into two main parts: the kernel and the services.

The operating system’s kernel is immediately responsible for abstracting the hardware resources of a computer. In this way, the kernel creates a bridge between hardware and software.

The operating system’s services, in turn, uses the resources enabled by the kernel to provide functionalities to both computer programs and computer users.

So, beyond executing software programs, the operating system services enable the computer users to interact with these programs.

The following image shows the operating system in the context of a computer system: 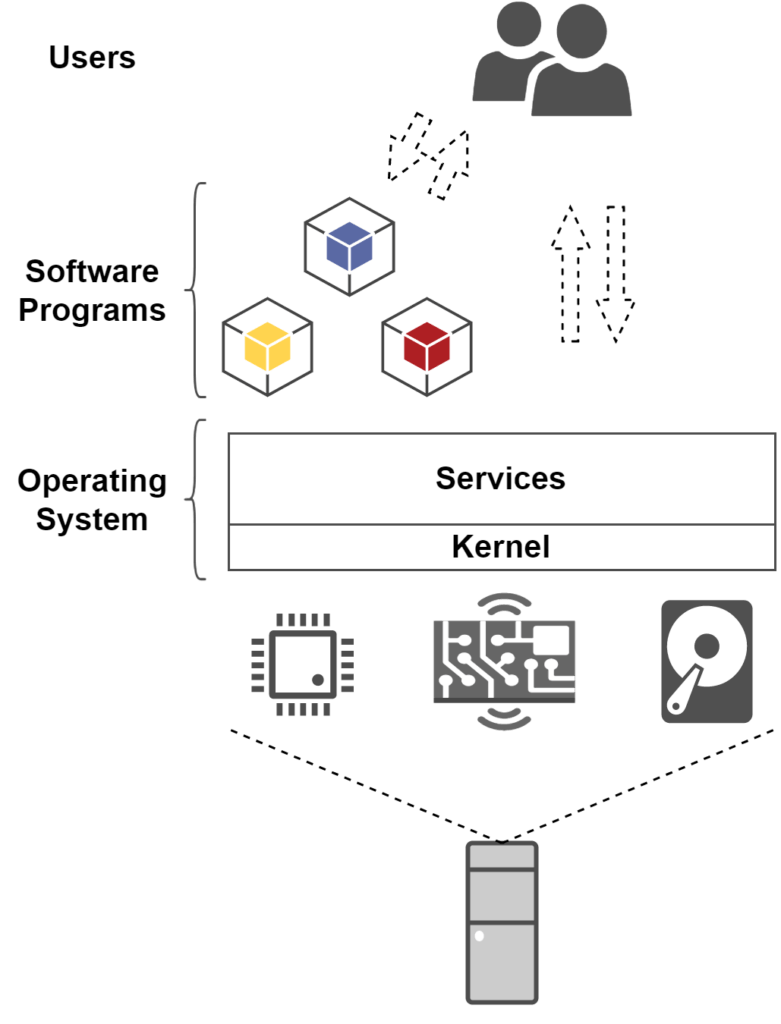 3. Typical Services of an Operating System

As discussed in the previous section, we know that an operating system provides multiple services for its users. Some of these services enable interactions between users, the operating system itself, and other software programs. Other services, in turn, tackle internal routines of computer systems lifecycle.

In the following subsections, we’ll explore relevant services provided by the operating systems.

The user interface is the service that practically enables users to interact with an operating system. So, it means interacting with the entire computer system itself.

Examples of CLI interfaces are the command prompt of Windows and the terminal of Linux-based systems.

The second option, GUI, consists of a windowed graphical design with which the users can interact by clicking with the mouse and typing with the keyboard.

Graphical interfaces are considered more user-friendly than the commando line ones. So, they are widely adopted in general-purpose operating systems.

Examples of GUI designs are the Microsoft Metro and the Linux GNOME.

Another vital service of the operating system is program execution. Executing a program is not a simple task. To do that, operating systems tackle a myriad of operations, such as program loading, management of execution stacks, and process scheduling. 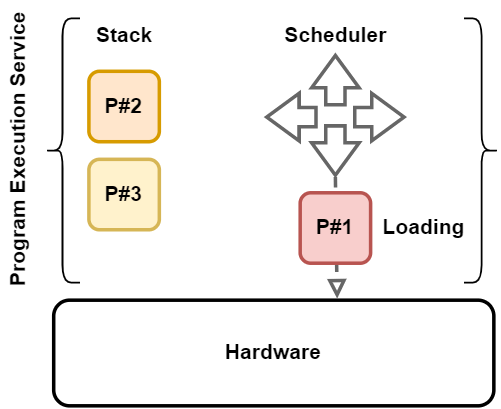 Although it is complex, the service of executing programs makes the operating system significant for the users. This service allows different users to use the same operating system to deal with distinct tasks through running heterogeneous programs.

A user can not directly control Input/Output (I/O) devices, such as monitors, speakers, keyboards, and mouses. So, operating systems mediate the communication between the user, I/O devices, and the computer system. Let’s see some examples in the following image: 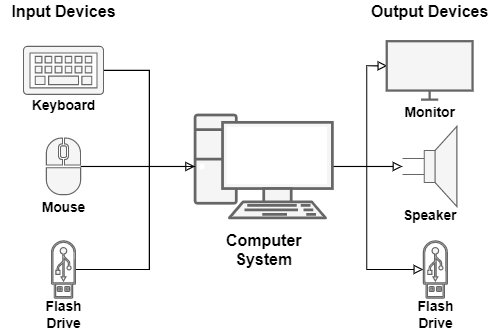 In such a case, the operating system provides a service with several system calls and interrupts that can both send and receive operation requests to the available I/O devices.

It is important to highlight that controlling the I/O operations of a specific device may require the installation of drivers. Drivers, in turn, supply a kind of guideline to the operating system on how to communicate with particular I/O devices.

The file system keeps and organizes all the files of a computer in persistent memory, usually a Hard Disk (HD) or Solid-State Drive (SSD).

However, it is normal for the user to create, modify, delete, and search data files in the file system. Thus, the operating system provides a service for the users to manipulate the file system, enabling them to execute the cited management operations.

Furthermore, the operation systems control the permissions given to users and programs to access files. These permissions (or restrictions) are applied to avoid unauthorized modifications and reads of crucial files, which can damage the computer system.

The image next shows an abstract example of the permissions control of an operating system: 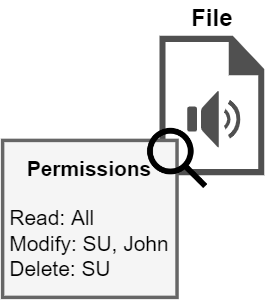 The operating system has specific mechanisms to enable processes running in the same computer to communicate. The most common examples are pipes and shared memory.

In short, pipes consist of data buffers that connect two processes. In technical terms, the operating system associates file descriptors to each pipe: one for reading and another for writing it.

The other option is using memory regions shared between two or more processes. In this case, the operating system defines the shared memory regions. The addresses of these regions are included in the addressing spaces of the processes, which can exchange data through them.

If we consider processes communicating over the network, most operating systems provide the mechanism of sockets.

Sockets are descriptors associated with a file representing a network connection. So, the processes can indicate the data to be sent and its destination through a socket. The operating system, in turn, triggers the requested message sent through the network. 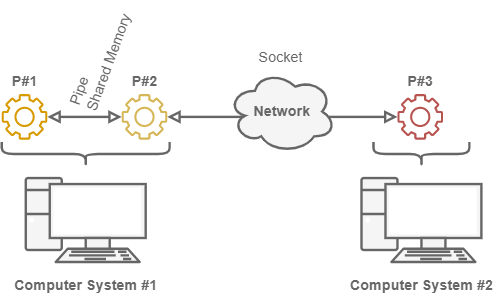 It is relevant to highlight that, besides pipes, shared memory, and sockets, operating systems also make available other mechanisms to implement inter-process communication.

During a computer system lifecycle, several errors can occur. For example, we can have CPU errors, memory bad allocations or accesses, a component failure causing a hardware error, or even an error caused by an I/O device.

First, the error detection service of operating systems must avoid a computer system completely breaking down when an error happens. So, this service must catch errors and manage them, keeping the entire system as functional as possible.

Furthermore, the error detection service must be able to inform the user about the errors, showing their codes, descriptions, and, if known, manners to fix them.

The image next presents error situations that may occur and be handled by the operating system:

Resource allocation means dedicating computing resources to processes and users. We have many resource types, such as CPU (actually, CPU time), memory, networking, and I/O devices. So, as the operating system controls these resources, it naturally decides which processes use them.

The consequences of not dealing with the previously cited challenges may be complex. For example, two processes hold particular resources required by both. So, they indefinitely wait for each other to release these resources. We call this condition a deadlock.

Other complex conditions that may occur are livelocks and starvation. The operating system must avoid these conditions with efficient resource management and solve them if they happen anyway.

Accounting consists of keeping track of the behavior of both users and processes in the computing system.

For instance, the operating system analyzes which users require the execution of which processes. So, it can also investigate how many computing resources are requested by the processes executing on the computer.

Finally, the operating system can correlate the obtained information and generate statistics about the users of the computer system and the processes running on it.

The following image shows a simplified example of a system resource usage accounting: 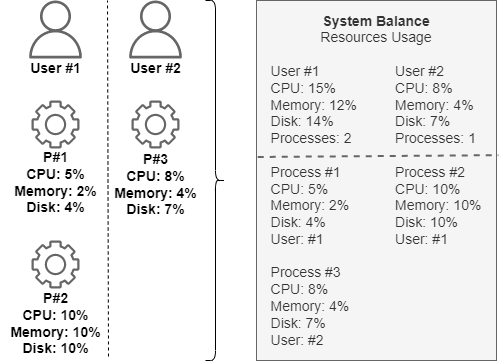 Regarding the operating system, we can understand security in different aspects.

The first aspect consists of internal security for the processes. The operating system must be able to guarantee the correct execution o0f processes.

Thus, the operating system must provide the required computing resources for the processes and adequately control them. Moreover, it must prevent other processes from inadvertently or maliciously interfering in given process execution.

Another relevant aspect of security is guaranteeing that only authorized users trigger the creation, modification, and remotion of resources and processes in the computer system.

The image next shows an example of a traditional login screen of an operational system: 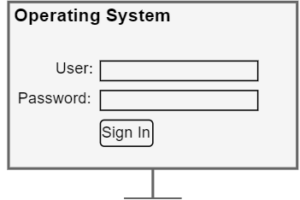 We can conclude that operating systems are the core software of any computer. Their essential services allow the correct and efficient execution of processes, thus enabling the users to utilize the computer systems properly.