An operating system (OS) kernel is one of the challenging topics in computer science.

In this tutorial, we’re going to briefly define what the OS kernel is and give some information about its purposes.

The kernel is the most important part of the operating system. It is the primary interface between the hardware and the processes of a computer. The kernel connects these two in order to adjust resources as effectively as possible.

It is named a kernel because it operates inside the OS, just like a seed inside a hard shell. The figure below shows its place in an OS. It controls all of the main functions of the hardware, whether it’s a tablet, desktop, server, or any other kind of device: 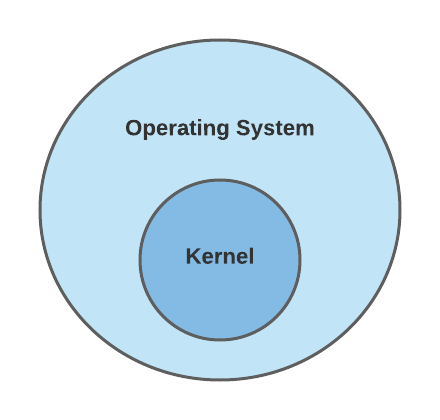 The kernel is one of the initial programs loaded up on memory before the boot loader. The boot loader is responsible for translating instructions for the central processing unit. It manages memory as well as peripherals such as keyboards and monitors.

3. Purposes of the Kernel

The kernel has several important jobs, such as process and memory management, disk storage, and low-level networking. We can summarize the main purposes of the kernel as below:

If the developers implement the kernel appropriately, it is out of sight of the user. It operates in its own area called the kernel space. It allocates memory and monitors where everything is stored in the kernel space.

The user space is the environment where the user sees files and web browsers. These programs communicate with the kernel using a system call interface.

If we try to visualize where the kernel fits in a machine, we can think of the machine as having three layers: 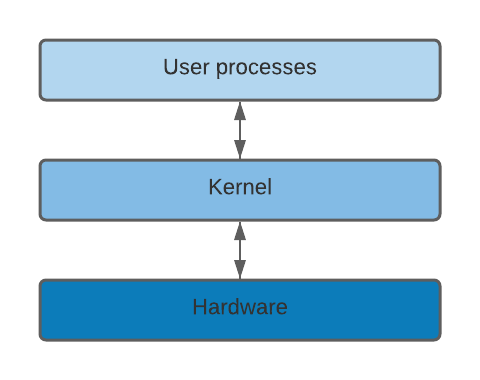 Kernel: As we can see, it’s right in the middle of the layers. It’s the core of the OS.

Hardware: It’s the physical machine, the base of the system. It consists of memory, the processor or the central processing unit (CPU), and input/output (I/O) components such as graphics, storage, and networking. The CPU executes computations and reads and writes to memory.

These two modes provide some critical and complicated operations. For example, it helps privilege separation for security. Actually, this means that if a process fails in user mode, kernel mode minimizes the error, and it can recover the process.

For example, most Unix kernels are monolithic. Each kernel layer integrates into the entire kernel program and runs in kernel mode. On the other hand, microkernel operating systems only require a small number of kernel functions such as an IPC mechanism and, a basic scheduler.

In this article, we gave the definition of the kernel in OS. Then, we briefly gave the information about its purposes. After that, we visualized where the kernel fits in a machine, and we listed some of the kernel types.