In this tutorial, we’ll present three ways to determine the rank of a node in a binary search tree (BST).

The rank of a node value

. The nodes can be of any data type as long as it comes with an ordering relation

. For example, the rank of

in the following tree is 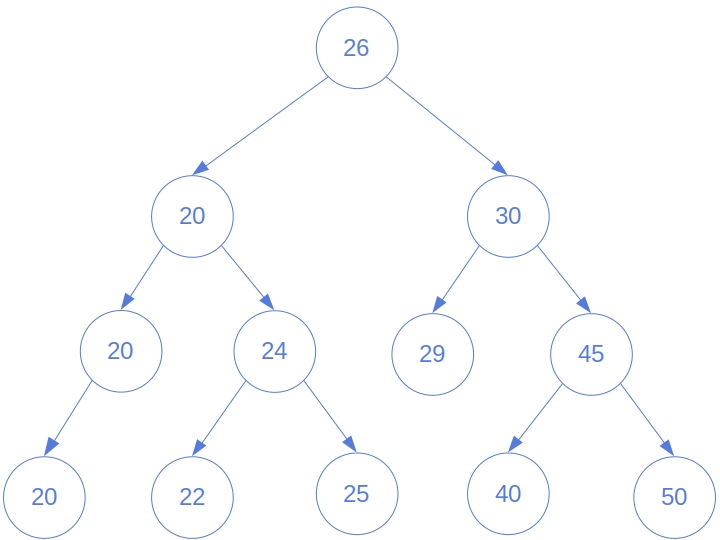 So, we have a value

and the root of a tree, and the goal is to find the

We don’t assume that

is present in the tree. If it is, it may repeat. The approaches we’ll present cover all the cases.

3. The Brute-Force Method to Determine Rank

in the left and right sub-trees. If the root is

, we increment the sum by

in the whole tree:

in the following tree: 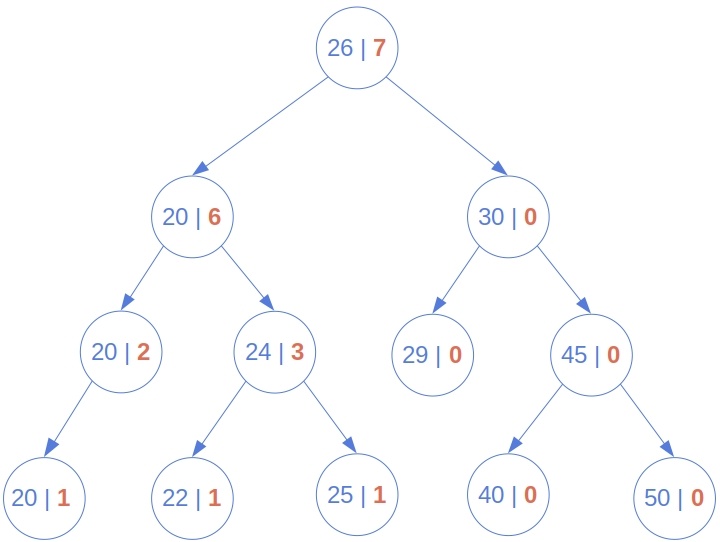 in the sub-trees until it gets to the root.

This approach isn’t efficient. We always traverse the whole tree, so the time complexity is

is the number of nodes. The reason is that we don’t use the fact that the tree is ordered.

There’s no need to calculate

. So, we differentiate between two cases:

The pseudocode is as follows:

This is how the order-based method determines the rank of 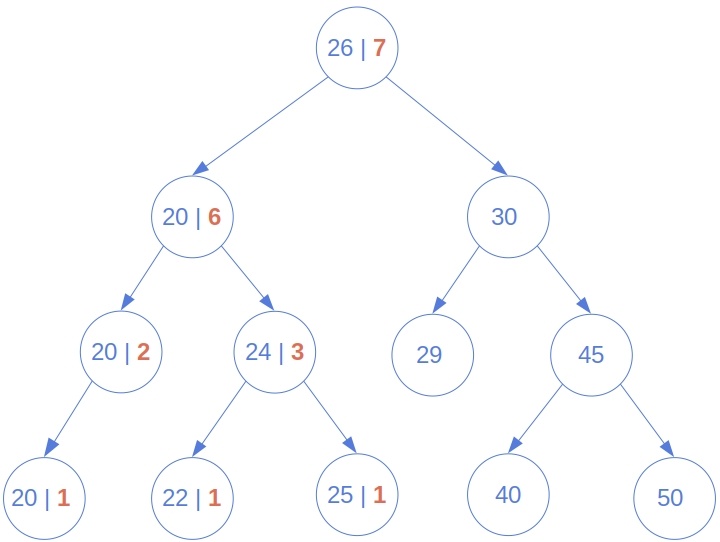 As we see, only the nodes less than or equal to

The worst-case scenario happens when

is greater than all the nodes in the tree. The algorithm will end up traversing the whole tree, so the worst-case time complexity is

, the same as for the brute-force approach.

Still, the method will mostly run faster than brute force because it visits exactly

, whereas the brute-force solution visits

nodes no matter the rank of

We can, however, speed it up even more if we’re ready to do a little bookkeeping.

If we augment each node with the information on its size, we can skip traversing the left sub-tree. Instead, we read the value of the size attribute and recurse on the right sub-tree only:

The trees whose nodes store the size can efficiently answer the queries about the rank of a value and find the node that has the given rank. Such trees are called order-statistic trees. 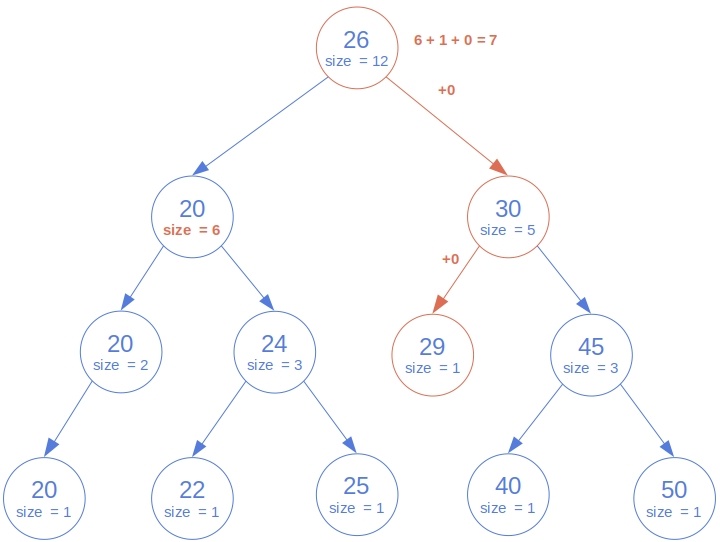 Since the root is

, we read the size of its left sub-tree (

), count the root as

so that we can disregard it along with its right descendants. Therefore, we make a recursive call for its left child. It’s also

, so we go to the left again. However, there’s no left child, so we return

and propagate it to the root of the whole tree. That way, we calculate the rank as

, which is the correct result.

This method traverses a single path in the tree to find the input value’s rank. Any path’s length is bounded by

, the tree’s height, i.e., the length of the longest path between the root and a leaf node.  So, the time complexity is

. Depending on the tree’s structure,

is usually considerably lower than

. But, the downside is that whenever we add or delete a node, we have to update the size attributes of all the node’s ancestors to the root.

If the tree is balanced, it will hold that

, so the whole algorithm will be of logarithmic complexity in the worst case. However, to keep the tree balanced, we need to rebalance it after every update.

If the tree is unbalanced, the worst case is the degenerate tree consisting of a single branch with

larger than all the nodes. In that case, the algorithm will visit all

nodes and have the worst-case complexity of

Unlike the previous two methods, this one can be made tail-recursive since there’s nothing with the return value of a recursive call other than passing it up the call stack. To transform the function to the tail-recursive form, we accumulate the partial results and make sure that the return statement is the last one executed in the function’s body:

Tail-recursive functions can be tail-call optimized, which means that a single frame on the call stack can be reused for each call. Without tail-call optimization, we risk the stack overflow error if the path being visited is too deep.

Further, there’s a straightforward way to turn tail-recursive functions into iterative ones.

Which algorithm should we use? The answer is: it depends.

The brute-force approach is the least efficient of all the three but is sometimes the only way to go. If the tree is ordered by relation

, and we want to find the rank for another relation

, our only option is brute force. We have to traverse the whole tree because

tells us nothing about

If we want to determine the rank for the same relation that orders the tree, the second and the third approaches will work better than brute force. If we can’t augment nodes with the size attribute, we should use the second algorithm. If we can, the third method should be our choice.

Whether or not we use the balanced trees depends on multiple factors. The first and the second algorithms don’t require balanced trees, but other operations we might perform on the tree may benefit if we keep it balanced. The third approach benefits the most from balancing the trees. But, due to rebalancing, it may not pay off. That’s the case if the rank queries are rare and insertions, deletions, and updates happen frequently.

In this article, we presented three ways to determine a node’s rank in a binary search tree. One is

if the input tree is balanced. Otherwise, all the three are

in the worst case, although the two non-brute-force approaches are typically faster than the brute-force method in practice.