In this tutorial, we’ll talk about ways to convert a recursive function to its iterative form. We’ll present conversion methods suitable for tail and head recursions, as well as a general technique that can convert any recursion into an iterative algorithm.

Recursion offers many benefits. Many problems have a recursive structure and can be broken down into smaller sub-problems. So, solving the sub-problems recursively and combining their solutions is a natural way to handle such problems. For that reason, recursive functions are easier to read, understand, and maintain.

is more readable because it follows the definition of Fibonacci numbers:

However, since the stack’s depth is limited, it will throw an overflow for large

The most straightforward case to handle is tail recursion. Such functions complete all the work in their body (the non-base branch) by the time the recursive call finishes, so there’s nothing else to do at that point but to return its value. In general, they follow the same pattern:

The accumulator is the variable that holds partial solutions during execution. They represent the solutions to a sequence of sub-problems, nested one within the other. Each call updates the accumulator until the recursion reaches the base case. At that point, the accumulator holds the solution to the entire problem we started solving in the beginning.

The above pattern of tail recursion has the following iterative version:

From this, we formulate the general rules of conversion:

Let’s put those rules to use and convert a tail-recursive function for calculating factorials:

Let’s now identify the elements of this tail recursion that we’ll reorder in the iterative variant:

With that in mind, we get the following iterative function:

Even though the negation of

, we use the latter because

is restricted to natural numbers.

Luckily for us, there’s a general way to transform any recursion into an iterative algorithm. The method is based on the observation that recursive functions are executed by pushing frames onto the call stack and popping them from it. Therefore, if we simulate our stack, we can execute any recursive function iteratively in a single main loop. The resulting code, however, may not be pretty. That’s why we usually first try to make our function tail-recursive. If we succeed, we can get fairly readable code using the method from Section 3. If not, we use the general conversion method. So let’s first inspect the general form of recursive functions.

A  recursive function can make an arbitrary number of recursive calls in its body:

), as well as those where

depends on the problem’s size. Also, a base-case solution can be constant or depend on

can be empty or a single instruction or include calls to other subroutines. The purpose of

is to prepare the data for the

-th recursive call. Finally, combining recursive sub-solutions should also be understood generally: it can be as simple as

creates a frame. It’s a structure holding the passed parameters, local variables, and the placeholder for the return value. If we visualized the frames and tracked the calls, we’d see that the recursive function defines an implicit and directed graph. Its nodes are frames, some of which have no out-looking edges. They represent the base cases of our recursion. Others have inward and outward edges: they model the calls between the base cases and the first call. Let’s see a portion of the graph for the Fibonacci numbers: 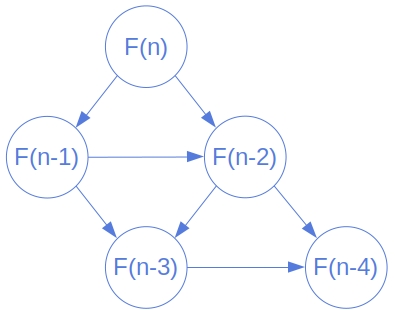 A directed edge from

corresponds to a recursive call in

the active frame. Accordingly, executing a recursive function is the same as traversing the frame graph in a structured way. We cross over each edge

twice: the first time when

makes the call that creates the

‘s frame and the second time when

returns the call’s value to

So, we start in the original caller’s frame node and execute the non-recursive code block before the first recursive call. At that point, we’ve created a child node that represents the call’s frame. The way recursion works implies that we should move to the child node and visit its descendants in the same manner. Afterward, we collect its frame’s return value, go back to the start node, and move to the next child. The goal is to visit all the nodes and return to the initial frame, at which point we combine the children’s return value and output the solution.

But, how does this graph help us turn a recursive function into an iterative one? The answer lies in the fact that we’ve just described a depth-first traversal of the execution graph. The iterative version of depth-first traversal uses a stack to store the nodes marked for visiting. If we implement the nodes and edges in a way that corresponds to the elements of our function, we’ll get its iterative version. There, the stack for storing the nodes plays the role of the call stack of a CPU:

The execution graph is implicit. That means that we create it on the fly as we execute non-recursive code blocks and make recursive calls. To do it properly, we should implement the frames and edges following the structure of the recursive function we’re transforming.

should return the edge associated with the first non-executed NRCB and recursive call. It should also contain the pointer to the child frame we get by following the edge. So, this function should divide the problem into sub-problems and create child frames. A-frame should be a data structure capable of holding its local variables and its sub-problem. It should also be able to pass its return value to its parent.

Let’s convert this recursion into iteration:

could be a Python dictionary we’d create like this:

An instance of Frame should be coupled with functions to calculate the return value and pass it to the frame’s parent:

In this implementation, we don’t need to model edges. From Algorithm 7, we see that an edge should contain a child frame (the node it’s directed to) and the corresponding NRCB. We can model an NRCB as an integer that we’d include as another integer field, nrcb_counter, into the frames, initialize to 0 in create_new_frame, and interpret with the following function:

We’ll update the counter and execute the corresponding NRCB in the function that returns the next child frame:

We test if frame has an unvisited out-going edge by verifying that it’s not a base-case frame and checking if frame.nrcb_counter < 2. The whole code would look like this:

Supplying the general depth-first traversal algorithm with recursion-specific implementations of the frames, edges, and associated functions, we get an iterative variant of the recursive function we wanted to transform. However, the resulting iterative code will not be as readable and understandable as the original recursive one.

We do retain some semantics in the graph, though. Because it embodies the recursive structure of the original problem, we can still interpret it. A node with its children represents the body of recursion, while the base case can be recognized in the nodes with no children.

4.8. Optimization and Types of Recursion

Finally, we note that we can visit some nodes in the graph more than once. That’s the case if sub-problems overlap, as is the case with the Fibonacci numbers. Both

would be visited twice. Multiple visits to the same node result in repeated calculation and increased complexity. We can address this issue by remembering the return values. Whenever we compute the value a node should return, we store it in the node. If we later visit the same node, we reuse the solution already found and avoid repeated evaluation. This technique is called memoization. Some authors consider it a tool of dynamic programming.

Further, the shape of the execution graph reveals the difference between various recursion types. The graph of a recursive function that makes only one recursive call in its body is a path. If it makes two calls and the sub-problems don’t overlap, the resulting graph will be a binary tree. Tail recursion is specific because its recombination phase is an identity operation: each node only forwards the child’s return value. That’s why we don’t need a stack to make it iterative.

In this article, we talked about converting recursion into iteration. We presented a general way to transform any recursive function into an iterative one. Also, we showed a method for tail recursion only. Even though conversion may give us gains in performance, the code loses readability this way.